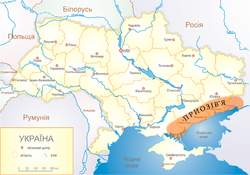 Pryazovia (Ukrainian: Приазов'я, Russian: Приазовье, Priazovye) or literally Cis-Azov region is usually referred to the geographic area of north coast of the Sea of Azov.[1] It is located in the northern part of the Azov-Kuban Lowland which surrounds the Sea of Azov for the most of coastline stretch. In a more general sense it may mean the Azov Sea littoral.

It consists of southern part of Donetsk Oblast, Zaporizhzhia Oblast, eastern part of Kherson Oblast. The western part of Rostov Oblast in Russia could also be claimed as a part of broader Northern Pryazovia. Before 1802 this land was part of Novorossiya (New Russia).