Singhapala (Baybayin: ᜐᜒᜅ᜔ᜑᜉᜎ, Template:Lang-ceb, Tagalog: Lungsod ng Singapala, Old Malay: Kota Singapura) was an ancient fortified city or a region, the capital of the Indianized Rajahnate of Cebu. The location of this ancient city is what is now the modern Barangay Mabolo in the northern district of Cebu City. Founded by Sri Lumay or Raja Muda[1] Lumaya, a half-Tamil[1] prince from Sumatra.[2][3][1]

The name Singhapaha comes from Sanskrit word via Orang Keling Singama (சிங்கம்) become Singa in Old Malay which means (Lion), and Puram (புரம்) (Town or a City) which become Pura in Old Malay and then Pala in Philippine languages, it's variation of the sanskritized Singa-Puram, Singapura literally means "Lion city" from Singapur (சிங்கப்பூர்), the same root name of the country of Singapore. 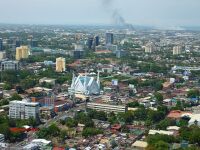 The location of ancient Singhapala was said to be in what is now the currently part of the Northern district in modern-day barangay Mabolo in Cebu City,[2] with estimated population of 21,842 in 2010. while the modern Cebu City where comprises 80 barangays. These are grouped into two congressional districts, with 46 barangays in the northern district and 34 in the southern district.[4][5][6][7]

As a trading center

During Rajah Humabon's reign, the region had since become an important trading center where agricultural products were bartered. From Japan, perfume and glass utensils were usually traded for native goods. Ivory products, leather, precious and semi-precious stones and śarkarā(Sarkarai in Tamil) (sugar) mostly came from India traders and Burmese people traders.[8] The harbors of Sugbu and the capital Singhapala became known colloquially as sinibuayng hingpit ("the place for trading"), shortened to sibu or sibo ("to trade"), from which the modern Castilian name "Cebú" originates. It was also during Humabon's reign that Lapu-Lapu arrived from Borneo, and was granted by Humabon the region of Mandawili (now Mandaue), including the island known as Opong or Opon (later known as Mactan). First contact with the Spanish also occurred during Humabon's reign, resulting in the death of Ferdinand Magellan.[9]

According to Aginid, Bayok sa atong Tawarik,[10] a Visayan folk story, prior to the coming of the Spanish conquistadores, rajahnate was the common form of state or government of Cebu island. This rajahnate was established by Sri Lumay (c. 1400 CE.), who was a prince of Chola Dynasty that ruled Sumatra then who settled in Cebu with his son, Sri Alho, they ruled the south known as Sialo which included Valladolid, Carcar, up to Santander.[2][3]

His other son, Sri Ukob, ruled the north known as Nahalin which includes the present towns of Consolacion, Liloan, Compostela, Danao, Carmen, and Bantayan. As a ruler, Sri Lumay was known to be strict, merciless, and brave. He assigned magalamags to teach his people to read and write ancient letterings. He ordered routine patrols by boats from Nahalin to Sialo by his mangubats (warriors).

Although a strict ruler, Sri Lumay was a loving person that not a single slave ran away from him. During his reign, the Magalos (literally destroyers of peace) who came from Southern Mindanao from time to time invaded the island to loot and hunt for slaves. Sri Lumay commanded to burn the town each time the southerners came to drive them away empty handed. Later, they fought these Magalos (Moro raiders) so that they leave the town for good.

The town was thus permanently called Kang Sri Lumayng Sugbo, or Sri Lumay’s scorched town. Trading was vibrantly carried on by Sri Lumay’s people with merchants from China, Japan, India, and Burma in Parian, located at the northeastern part of Cebu City.

The archipelago was strategically positioned in southeast Asia that it naturally became part of the trade route of the ancient world. Agricultural products were bartered for Chinese silk cloths, bells, porcelain wares, iron tools, oil lamps, and medicinal herbs. From Japan, perfume and glass utensils were usually traded with native goods. Ivory products, leather, precious and semi-precious stones and sarkara (sugar) mostly came from the Burmese and Indian traders.

Sri Lumay was killed in one of the battles against the magalos and was succeeded by his youngest son Sri Bantug who ruled Singhapala .

“Bantug carried on his father’s rules throughout his reign. He organized umalahukwans (reporters) to urge people in Nahalin and Sialo to obey his orders, especially on agricultural production and defense.

Antonio Pigafetta, the expedition scribe of the Magellan Expedition, enumerated the towns and dependencies in the Rajahnate of Cebu and Singhapala was even mentioned albeit mispronounced as Cingapola.[11]

“In this island of Zubu there are dogs and cats, and other animals, whose flesh is eaten; there is also rice, millet, panicum, and maize; there are also figs, oranges, lemons, sugar-canes, cocos, gourds, ginger, honey, and other such things; they also make palm-wine of many qualities. Gold is abundant. The island is large, and has a good port with two entrances: one to the west, and the other to the east-north-east. It is in ten degrees north latitude and 154 east longitude from the line of demarcation.”

“In this island there are several towns, each of which has its principal men or chiefs. Here are the names of the towns and their chiefs:—

Mandani: its chief is Aponoaan.

Lalan: its chief is Teten.

During the Spanish period 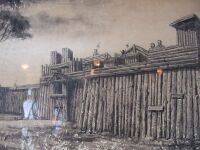 An illustration depicting what the Fort San Pedro may have looked like in 1565.

Singhapala might continued to exist until 1565, when the Rajahnate was dissolved during the reign of Rajah Tupas by the forces of conquistador Miguel López de Legazpi in the battle of Cebu.[12] Singhapala and the areas which is now composed of the modern Cebu City has incorporated in Spanish rule, and Miguel López de Legazpi 's party named the new city Villa de San Miguel de Cebú (later renamed "Ciudad del Santísimo Nombre de Jesús)." In 1567, the Cebu garrison was reinforced with the arrival of 2,100 soldiers from New Spain (Mexico). The growing colony was then fortified by Fort San Pedro.