The Sri Jayawardenepura Kotte Municipal Council area is bounded in: 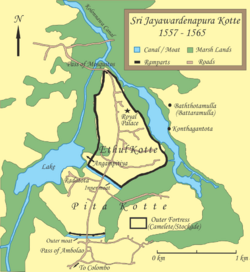 The village of Darugama lay at the confluence of two streams, the Diyawanna Oya and the Kolonnawa Oya. As Darugama was a naturally secure place, it was not easy for enemies to enter it. Here, in the 13th century, a chieftain named Nissanka Alagakkonara built a Kotte, or fortress.

Alagakkonara is mentioned by Ibn Batuta as ruling in Kurunegala, but other sources indicate that he was the Bandara (Guardian) of Raigama Korale (county) in the modern Kalutara District. Arya Chakravarthy's army was held by Alagakkonara in front of Kotte, while he defeated the enemy's invasion fleet at Panadura to the south-west.[4]

Kotte was a jala durgha (water fortress), in the shape of a triangle, with the Diyawanna Oya and Kolonnawa Oya marshes forming two long sides; along the shorter third (land) side a large moat (the 'inner moat') was dug. The fortress was nearly 2.5 km2 (0.97 sq mi) in area, fortified with ramparts of kabook or laterite rock, 2.5 metres (8 ft 2 in) high and 10.7 metres (35 ft) in breadth.[5]

In 1391, following the conquest of the Kingdom of Jaffna by Prince Sapumal (Sembahap Perumal), Kotte was given the epithet 'Sri Jayawardenepura' ('resplendent city of growing victory'). It became the capital of the ancient Kingdom of Kotte, which it remained until the end of the 16th century.

From the ramparts to the magnificent three storied buildings that housed the Kings Palace, Laterite and clay were the main raw material used in its construction. One of the places from which the laterite blocks were mined can be seen even today inside the premises of Ananda Sasthralaya (a local school).

The main features of the capital city were:[5]

The Portuguese arrived on the island in 1505 and were initially welcomed by the King. But they had militaristic and monopolistic intentions and gained control of the city by 1565. Failing to withstand repeated assaults by the forces of the neighbouring kingdom of Sitawaka, the city was abandoned by the Portuguese, who made Colombo their new capital.[7]

Like similar cities of that era, Sri Jayawardenepura was built with security in mind. A rampart and moat protected the entire city. Traces of this moat and rampart are still visible today at certain places. Along parts of the rampart, encroachers have now built houses, garages and even toilets.

The urbanisation of Kotte restarted in the 19th century. The archaeological remains were torn up and used as building materials (a process that continues)—some of it even ending up in the Victoria Bridge, across the Kelani River.

The New Parliament was inaugurated on 29 April 1982. The buildings were built on reclaimed land, after a massive lake was formed by dredging the marshlands around the Diyawanna Oya. The new parliamentary buildings were built on Duwa, a 50,000 square metre (12 acre) island in the centre of the lake. The island (off Baddegana Road, Pita Kotte) had been used as a recreation and brawling spot for Portuguese soldiers in the last days of Kotte era, alcohol being banned from the Royal City. It had belonged to E. W. Perera and had housed a chicken farm prior to being vested in the state. On 29 April 1982, the new parliamentary complex was declared open by the former president J. R. Jayewardene.

The process of relocating government institutions from the former capital of Colombo is still in progress. 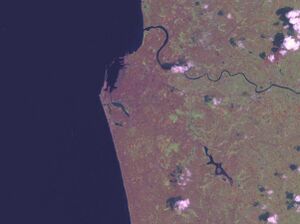 Sri Jayawardenepura Kotte is located at the southeast of Colombo, here seen in a satellite image.

Sri Jayawardenepura Kotte is a multi-ethnic, multi-religious urban centre. According to the census of 2012, the demographics by ethnicity and religion is as follows: 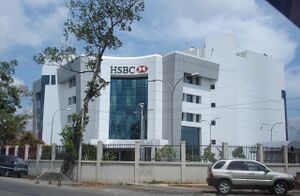 The only main railway station is at Nugegoda, on the Kelani Valley Line . Also at Nugegoda is the main bus terminus. There are subsidiary bus stands at Pita Kotte. This urban area is well served by buses and there is a CTB bus depot at Udahamulla.

In 2005, a Passenger boat service was being finalised and would commence adjacent to Parliament Junction at Bataramulla and end at the Wellawatte canal near Marine drive. Each journey would take around 30 minutes. It would have stations at the Kotte Marsh, Nawala, Open University, Apollo Hospital, Duplication road, Wellawatte and at St Peter's College, Colombo.[11] The Sri Lanka Navy is conducting a pilot project between the Open University and Wellawatte.

The main hospital of area situated at Madivela known as Sri Jayawardenepura Hospital is a gift from the Japanese government. There is a dedicated Eye & ENT hospital at Rajagiriya, and another maternity hospital under construction in Nawala. A small private health centre, the Blue Cross Hospital at Rajagiriya, provides basic facilities for medical diagnostics, and there is a small nursing home in Park Lane, Welikada, much patronised by Maldivians.

The oldest English school on the island is Sri Jayawardenepura Maha Vidyalaya, formerly known as Christian College, located in Pita Kotte. The Ananda Sastralaya at Pita Kotte is the oldest Buddhist school in the city, and Anula Vidyalaya, Nugegoda is the biggest Buddhist girls school in South Asia, with over 5000 students.

The Education Ministry as well as the Department of Examinations is based in Kotte.

A considerable number of the students living within the zone study at government owned colleges and International schools in Colombo.

Located at Nawala is the Open University, Sri Lanka, and at Nugegoda is the University of Sri Jayewardenepura. Public Libraries are conveniently located, and can be found at Nugegoda and Rajagiriya.

Sri Jayawardenepura Kotte features a tropical rainforest climate (Köppen: Af) more subject to the Intertropical Convergence Zone than the trade winds. Since there are a few cyclones, the climate is not purely equatorial but subequatorial, with little variation in temperatures throughout the course of the year. The city does feature wetter and drier months, with February on average being its driest month, seeing on average 63 mm (2.5 in) of precipitation. However, since none of the average monthly precipitation falls below 60 mm (2.4 in), Sri Jayawardenepura Kotte falls under the tropical rainforest climate category. 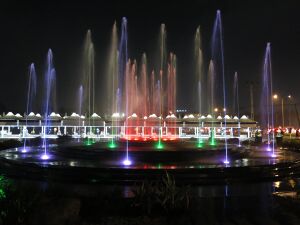 Cricket is the most popular sport in this urban area as well as the country and is usually played in the grounds around the city.

Association football was at one time the most popular sport in the Colombo area, although it was eclipsed by cricket after 1980. Four separate football clubs (Lido, Welikada Progress, Welikada Red Star and Welikada United) once used the EW Perera Park grounds at Welikada, Rajagiriya where a pavilion was constructed in the 1970s. However, when the grounds were destroyed by the JR Jayawardene regime in the late 1970s, the football clubs disappeared. Football continued to be played at the grounds at Obeysekerapura in Rajagiriya.

In the 1990s, the Kotte Municipal Council constructed the Chandra Silva Stadium, to replace the EW Perera Grounds. Part of the grounds was sold and later used to construct the HSBC building. In 2007 the Municipality, with aid from the Ministry of Urban Development, completed the first stage of the new Chandra Silva Stadium on the site of a rubbish dump behind the HSBC building.

Recently, football has once more grown in popularity, and the sport now has a considerable following. The football association's new training facility at Kotte is aimed at harnessing and developing the available talent and organizing the individual players into a cohesive team. It includes a football playground with a sprinkler system, gym and a host of other facilities.[14]

Other sports are mostly played in the numerous clubs and gyms, and include tennis, squash, billiards, horse riding, indoor cricket, badminton and table tennis. Horse riding can be pursued at the Premadasa Riding School in Nugegoda.