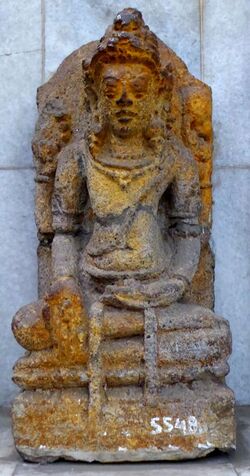 Batara Guru (also called Bhattara Guru, Debata Batara Guru and Batara Siwa) is the name of a supreme god in Indonesian Hinduism.[1][2] His name is derived from Sanskrit Bhattaraka which means “noble lord".[3] He has been conceptualized in Southeast Asia as a kind spiritual teacher, the first of all Gurus in Indonesian Hindu texts, mirroring the guru Dakshinamurti aspect of Hindu god Shiva in the Indian subcontinent.[4][5] However, Batara Guru has more aspects than the Indian Shiva, as the Indonesian Hindus blended their spirits and heroes with him. Batara Guru's wife in Southeast Asia is Shiva's consort Durga.[6][7]

Batara Guru is considered as a form of Rudra-Shiva,[8] a creator god in mythologies found in Javanese and Balinese Hindu texts, in a manner similar to Brahma-related mythologies in India. He is supreme in Indonesian Hinduism, much like the god Jupiter was in Roman era.[9]

Batara Guru in the mythologies of Sumatra, states David Leeming, is a primal being, creator of earth and first ancestor of human beings. He is conceptualized quite similar to the creator deity found in Central Asia and Native North America.[10] According to Martin Ramstedt, Batara Guru in other parts of Indonesia is sometimes identified with Shiva, and elsewhere as transcending "Brahma, Vishnu, Shiva and Buddha".[11]

Batara Guru, or Bhattara Guru, is derived from Sanskrit Bhattaraka which means “noble lord".[3] It refers to Siwa (Shiva) in the form of a guru, in Indonesian Hinduism.[12] According to Rachel Storm, the India god Shiva was known as Batara Guru outside of Indonesian Islands, and Batara Guru was the name for Shiva in rest of Southeast Asia.[13]

According to John Crawfurd, the word Batara is derived from avatara, both in "sense and orthography" and simply is a prefix to connote any deity.[14]

Batara Guru in Luwu, Indonesia has been conceptualized as formless, potent, invisible and unlocatable, states Shelly Errington.[1] Batara Guru does not answer to anyone else because he is everything, without boundary, without center, without edge, without emptiness. Batara Guru, states Errington, is considered perfectly one without form who is everything, everywhere all the time.[1] 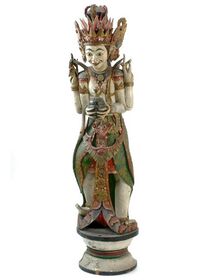 According to Sureq Galigo, Batara Guru was a god, the son of Sang Patotoqe and Datu Palingeq, who was sent to earth to cultivate it as human being. His divine name was La Togeq Langiq. He had at least ten children from his five concubines, but only one son from his beloved consort, We Nyiliq Timoq. He is the father of Batara Lattuq and grand father of Sawerigading, the main characters in the Bugis myth Sureq Galigo. He is also the father of Sangiang Serri, the goddess of rice and fertility in Bugis mythology.

The children of Batara Guru (according to Sureq Galigo) are: 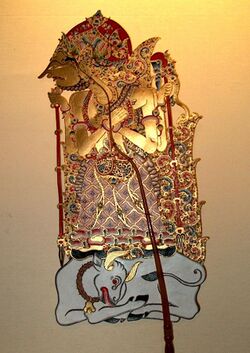 According to Javanese mythology, Batara Guru is a dewa that rules kahyangan, the realm of the gods. He is an avatar of Shiva that gives revelations, gifts and abilities. Batara Guru has a shakti (consort) named Dewi Uma and begat some children. In wayang kulit, Batara Guru is the only character whose feet face forward, with four hands, pointed canine teeth, a blue neck and paralyzed legs. He always rides his vahana, Nandini the cow, and is also known by several names including Sang Hyang Manikmaya, Sang Hyang Caturbuja, Sang Hyang Otipati, Sang Hyang Jagadnata, Nilakanta, Trinetra, Girinata.