In the Late Post-Classic Maya mythology of the Popol Vuh, Camazotz (/kɑːməˈsɒts/ from Mayan /kama ˈsots’/) (alternate spellings Cama-Zotz, Sotz, Zotz) is a bat spirit at the service of the lords of the underworld. Camazotz means "death bat" in the Kʼicheʼ language. In Mesoamerica generally, the bat is often associated with night, death, and sacrifice.[1]

In the Popol Vuh, Camazotz are the bat-like spirits encountered by the Maya Hero Twins Hunahpu and Xbalanque during their trials in the underworld of Xibalba. The twins had to spend the night in the House of Bats, where they squeezed themselves into their own blowguns in order to defend themselves from the circling bats. Hunahpu stuck his head out of his blowgun to see if the sun had risen and Camazotz immediately snatched off his head and carried it to the ballcourt to be hung up as the ball to be used by the gods in their next ballgame.[3] 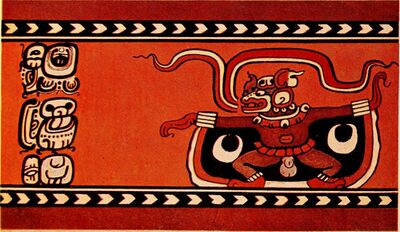 In Classic Maya iconography, the (leaf-nosed) bat, exhaling unhealthy vapours, is often depicted as a person's nahual or way-spirit bringing disease over an enemy. However, the Classic bat spirit is rarely, if ever, part of a narrative context, nor does it appear to play the role assigned to it by the Popol Vuh.[4]