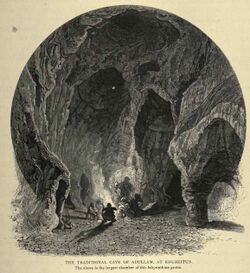 The Cave of Adullam was originally a stronghold referred to in the Old Testament, near the town of Adullam, where future King David sought refuge from King Saul.[1]

The word "cave" is usually used but "fortress", which has a similar appearance in writing, is used as well. Wilhelm Gesenius' work Hebrew and Chaldee Lexicon to the Old Testament Scriptures provides notes supporting Adullam as meaning "a hiding place".[2] Brown, Driver, and Briggs' Hebrew and English Lexicon of the Old Testament cite the Arabic word 'adula to mean "turn aside" and suggest Adullam to mean "retreat, refuge".[3]

During this period, David passed up several opportunities to kill Saul, who in turn was attempting to kill his young rival, whose followers believed had been chosen by God to succeed King Saul. David refused to fight unfairly, for instance,it would be bellicose to kill Saul in his sleep. According to the Old Testament, God honored David's high ethical standards and soon King David and his men, who had once hidden in the Cave of Adullam, were known throughout Israel for their deeds of valor.