Short description: Overview of the role and celebration of Christmas in Scotland 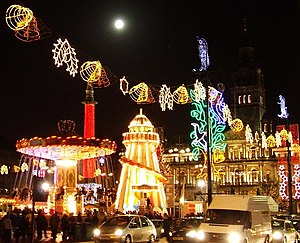 Prior to the Reformation of 1560, Christmas in Scotland, then called Yule (alternative spellings include Yhoill, Yuil, Ȝule and Ȝoull; see Yogh), was celebrated in a similar fashion to the rest of Catholic Europe. Calderwood recorded that in 1545, a few months before his murder, Cardinal Beaton had "passed over the Christmasse dayes with games and feasting". However, the Reformation transformed attitudes to traditional Christian feasting days, including Christmas, and led in practice to the abolition of festival days and other church holidays;[1][2] the Kirk and the state being closely linked in Scotland during the Late Middle Ages and the Early Modern period. A 1640 Act of the Parliament of Scotland abolished the "Yule vacation and all observation thereof in time coming".

The first Act was partly repealed in 1686,[5] when Episcopalianism was briefly in ascendancy within the Kirk.

The second Act was partly repealed in 1712 by the Yule Vacance Act 1711 of the Westminster Parliament.[6]

Christmas became a Bank Holiday in Scotland, in 1871.

Robert Jamieson recorded the opinion of an English clergyman regarding the post-reformation suppression of Christmas:[8]

"The ministers of Scotland, in contempt of the holy-day observed by England, cause their wives and servants to spin in open sight of the people upon Yule day, and their affectionate auditors constrain their servants to yoke their plough on Yule day, in contempt of Christ's nativity. Which our Lord has not left unpunished, for their oxen ran wud, and brak their necks and lamed some ploughmen, which is notoriously known in some parts of Scotland."

The period of festivities running from Christmas to Handsel Monday, including Hogmanay and Ne'erday, is known as the Daft Days.[9][10][11]

Christmas in Scotland was traditionally observed very quietly because the Church of Scotland, a Presbyterian church, for various reasons[clarification needed] suppressed Christmas celebrations in Scotland after the Reformation.

Christmas Day was made a public holiday in 1871 in Scotland, Boxing Day only in 1974.[12] The New Year's Eve festivity, Hogmanay, was by far the largest celebration in Scotland. The giftgiving, public holidays and feasting associated with mid-winter were traditionally held between 11 December and 6 January. However, since the 1980s, the fading of the Church's influence and the increased influences from the rest of the United Kingdom and elsewhere, Christmas and its related festivities are now nearly on par with Hogmanay and Ne'erday. Edinburgh, Glasgow and other cities now have traditional German Christmas market from late November until Christmas Eve.[13]