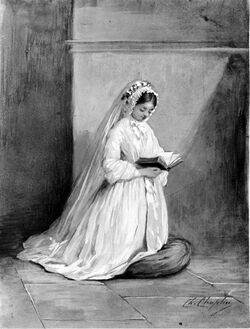 The Confirmation dress is a traditional style of dress that was to be worn by girls partaking in the Christian ritual of Confirmation, also referred to as the first communion. Confirmation is the public declaration, made by children or young adults who have been already baptised in their infancy, of following the Christian faith in their adult life.[2][3] The traditions of this ritual vary between the different branches of the Christian religion, however, the tradition of the dress has remained similar across all of the denominations.

The traditional design of the dress purposefully mimics that of a bride's gown – a wedding dress – for symbolic reasons surrounding the historic view of young women in the church.[4] In modern practices of this ritual, however, the wearing of this traditional Confirmation dress is less socially enforced.

In 1868, the Harper's Bazaar magazine described their idea of the fashionable style of white Confirmation dress as: "Swiss muslin dress with high neck and long sleeves. The bottom of the skirt is trimmed with a flounce a quarter of a yard wide. Bias folds simulate a Pompadour waist. White silk buttons close the corsage. ... A white veil completes the costume."[5] Other common designs of the traditional Confirmation dress included a lack of shaping, in the dress's construction, to contour the feminine figure, with waist definition provided by a belt and gathered skirts.[6] The main overarching feature of the traditional Confirmation dress design was that it was to be "perfectly plain" and 'simple'.[6]

The black Confirmation dress was worn in the 19th Century for its sombre recognition of the 'gravity' of the significance that Confirmation has on the participants' lives and, in the Netherlands, almost all candidates were dressed in black in 1848.[7] In 1868, Harper's Bazaar also described the fashion of Confirmation dresses as, commonly, black with high necks and close sleeves, worn with a black shawl which was trimmed with either a black satin ribbon or fringe and embroidered.[5]

In the Christian religion, white garments are significant because of the symbolic meaning attached to the lack of colour; white is seen as pure and clean. This symbol refers to the Christian belief that when one becomes a Christian they are transformed by God and now share in His Holy Spirit, which makes them clean. Thus, the white garments worn in the Confirmation ritual signify that the wearer has been transformed.[8] The whiteness of the dress for the Confirmation ritual also has theological meaning as a reference to the passage of the Bible found in Revelations 7:9,[9] and the vision of a great multitude of people coming before the Lamb of God wearing white.[7]

Especially significant for girls' Confirmation clothing, is that the colour white is also symbolic of virginity. There have been discussions by scholars around the correlation between the youth of girls partaking in the ritual of Confirmation and the historically young age at which they were given away by their fathers for the assurance that they were 'untouched' until marriage.[10] Because Confirmation is a ritual that symbolises the child's 'coming-of-age' and their dedication to Christ in their adult life, the bride-like design of the traditional girls' Confirmation dress was symbolic of this assurance that women remain pure before entering into the adult phase of life of being in a marriage, as well as the theological concept that while commitment to marriage is good, virginity is better.[10]

As the traditional design of the girls' Confirmation dress was styled after a bride, there is also symbolic significance in the wearing of the veil. This too, is relational to the young girl participating in the ritual of Confirmation and the importance of maintaining purity before marriage. Because the Christian virgin woman was seen as a bride of Christ, they often customarily wear veils. Therefore, it was thought that girls being confirmed should wear veils because they are moving into adulthood as a bride of Christ, making this commitment prior to imarriage.[10]

The amount that the parent will spend on the child is also communicative as a symbol of their social economic status. As, in the Catholic performance of the Confirmation ritual, a whole group of children will partake in it at once, it is thought that the more conspicuous styles and higher quality fabrics and accessories will make them stand out amongst the other children.[11]

The social symbol of Confirmation being a 'rite of passage' from childhood into adulthood was also represented in the common style of the Confirmation dress. The common attire for girls who are still in their childhood consisted of a knee-length skirt to allow them to run and play, but for their Confirmation, they wore floor-length skirts or dresses. This was a symbolic 'swapping out' of the old childhood garments for the more mature attire of a grown woman; a visual sign of their reaching 'mature' age.[7] 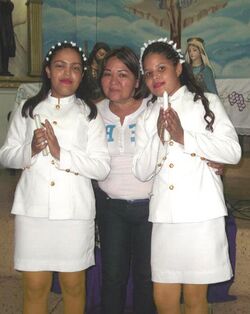 In modern practices of the Confirmation ritual, some parishes ask those partaking in the Confirmation ritual to wear identical, gender-neutral, clothing.[3] This is often in the case of white gowns which are to be worn over, and covering, discreet outfits, especially in the modern Roman Catholic practice of Confirmation,[13] and which are often also purchased especially for the ritual in conforming with the tradition of purchasing new garments for the participating children.[14]

The traditional 'white dress', however, is still commonly used in the ritual today. In these cases, the commercialisation of Confirmation dresses has been emphasised by the fact that the children are effectively 'on display' during this event and, as a result, their parents are pressured to spend more on their garments because they wish for their child to be more prominent than others.[11] Often participants will wear simple and elegant white garments which include the symbols significance to the original design but which follow modern fashion styles while remaining modest.[12]

In the literary work of Olive Senior (in her collection of short stories: Summer Lightning & Other Stories) the traditional Confirmation dress is likened to the Biblical parable of the Ten Virgins. In Senior's writing, the similarity between the wisdom or foolishness of the women spoken about in the parable to the innocence or maturity of the main character as she is prepared for First Communion.[15]

The similarities between the traditional Confirmation dress and the traditional styles of a bride's wedding dress has caused some controversy in more recent decades. To Feminist Religious Scholars, the adornment of young girls as they are dressed liked brides to participate in the Roman Catholic First Communion ritual is perceived as an initiation into the patriarchal disempowerment. The ritual is seen to be a push for young girls to take up the role of bride and mother in what the scholar Jennifer Stith calls the "blind subjugation" of the patriarchal construct of Catholic ritual and doctrine.[3] This is a view which condemns the traditional style of Confirmation dress, claiming that it has a negative impact on the young girls partaking in the ritual of First Communion and participating in 'Confirmation class' which, historically, would teach that the woman's position in the Catholic church was to marry and have children.[16]