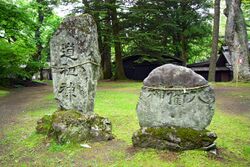 The Dōsojin is on the left 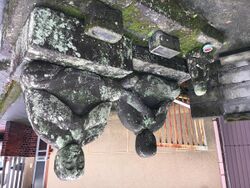 Dōsojin (道祖神, road ancestor kami) is a generic name for a type of Shinto kami popularly worshipped in Kantō and neighboring areas where, as tutelary deities of borders, they are believed to protect travelers and villages from epidemics and evil spirits.[1][2] Also called Sae no kami or Sai no kami (障の神・塞の神), Dōrokujin (道陸神) or Shakujin (石神, literally: "stone kami"), they are often represented as a human couple, by carved male or female genitals, large stones or statues, or even tall poles along a road.

Dōsojin can sometimes be enshrined in small roadside Shinto shrines called hokora. When shaped like a phallus, they are associated with birth and procreation, and therefore marital harmony.[3]

In modern times, Dōsojin have become fused in popular belief with a different deity having similar characteristics called "Sae no kami",[2] whose birth is described in the Kojiki. When kami Izanagi-no-mikoto sought to leave after going to the realm of the dead (Yomi no Kuni) to visit his spouse Izanami-no-mikoto, he was chased by the demoness Yomotsushikome (黄泉醜女, lit. Yomi ugly woman).[2] To stop her, he threw her a stick from which Sae no Kami was born. For this reason, he is the kami who prevents the passage of the spirits of the dead into the world of the living, and therefore a god who is a protector of boundaries. He is represented by large rocks set at the edges of villages. Because of the rocks' elongated shape, he came to be associated also with childbirth, children and matrimonial happiness.[2] As a consequence, he was in turn associated also with Jizō, the bodhisattva who is the protector of children.[3] 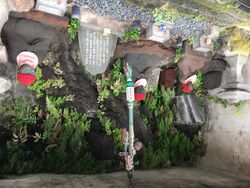 The Manazuru Sae no Kami(ja)

Jizō is the Japanese version of Bodhisattva Ksitigarbha, a Buddhist bodhisattva worshiped mainly in East Asia.[4] His assimilation within a group of kami is an example of the Japanese syncretism of Buddhism and Shinto (shinbutsu shūgō). Originally from India, in Japan he was given new attributes, and he is known as the guardian of unborn, aborted or prematurely dead children. Often found along roads in Japan, he has become a dōsojin.

Chimata-no-kami (岐の神, god of crossroads), according to the Kojiki, was born when kami Izanagi threw away his trousers to wash himself after returning from Yomi, the land of the dead. The Nihongi and Kogoshūi tell the same myth, but call the kami Sarutahiko.[5]