Short description: The Edict which revoked the Edict of Nantes 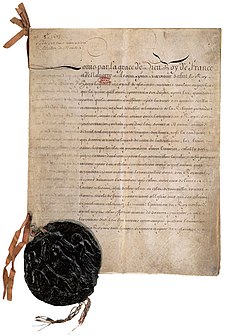 The Edict of Fontainebleau in the Archives Nationales

The Edict of Fontainebleau (22 October 1685) was an edict issued by French King Louis XIV and is also known as the Revocation of the Edict of Nantes. The Edict of Nantes (1598) had granted Huguenots the right to practice their religion without state persecution. Protestants had lost their independence in places of refuge under Cardinal Richelieu on account of their supposed insubordination, but they continued to live in comparative security and political contentment. From the outset, religious toleration in France had been a royal, rather than popular, policy.[1]

The lack of universal adherence to his religion did not sit well with Louis XIV's vision of perfected autocracy.[2] 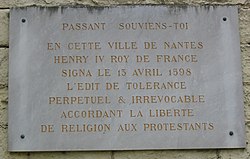 The Edict of Nantes had been issued on 13 April 1598 by Henry IV of France and granted the Calvinist Protestants of France , also known as Huguenots, substantial rights in the predominantly-Catholic state. Henry aimed at promoting civil unity by the edict.[3] The edict treated some Protestants with tolerance and opened a path for secularism. It offered general freedom of conscience to individuals and many specific concessions to the Protestants, such as amnesty and the reinstatement of their civil rights, including the rights to work in any field, including for the state, and to bring grievances directly to the king. It marked the end of the French Wars of Religion, which had afflicted France during the second half of the 16th century. 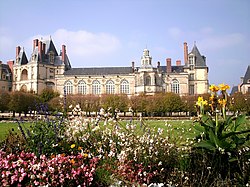 The palace at Fontainebleau as it now stands

By the Edict of Fontainebleau, Louis XIV revoked the Edict of Nantes and ordered the destruction of Huguenot churches as well as the closing of Protestant schools. The edict made official the policy of persecution that was already enforced since the dragonnades that he had created in 1681 to intimidate Huguenots into converting to Catholicism. As a result of the officially-sanctioned persecution by the dragoons, who were billeted upon prominent Huguenots, many Protestants, estimates ranging from 210,000 to 900,000, left France over the next two decades. They sought asylum in the United Provinces, Sweden, Switzerland , Brandenburg-Prussia, Denmark , Scotland, England , Protestant states of the Holy Roman Empire, the Cape Colony in Africa and North America.[4] On 17 January 1686, Louis XIV claimed that out of a Huguenot population of 800,000 to 900,000, only 1,000 to 1,500 had remained in France.

It has long been said that a strong advocate for persecution of the Protestants was Louis XIV's pious second wife, Madame de Maintenon, who was thought to have urged Louis to revoke Henry IV's edict. There is no formal proof of that, and such views have now been challenged. Madame de Maintenon was by birth a Catholic but was also the grand-daughter of Agrippa d'Aubigné, an unrelenting Calvinist. Protestants tried to turn Madame de Maintenon and any time she took the defence of Protestants, she was suspected of relapsing into her family faith. Thus, her position was thin, which wrongly led people to believe that she advocated persecutions.

The revocation of the Edict of Nantes brought France into line with virtually every other European country of the period (with the exception of the Principality of Transylvania and the Polish–Lithuanian Commonwealth), which legally tolerated only the majority state religion. The French experiment of religious tolerance in Europe was effectively ended for the time being. 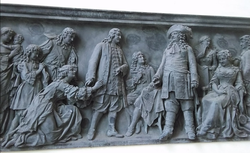 The Edict of Fontainebleau is compared by many historians with the 1492 Alhambra Decree ordering the Expulsion of the Jews from Spain and the Expulsion of the Moriscos in 1609 to 1614. All three are similar both as outbursts of religious intolerance ending periods of relative tolerance and in their social and economic effects. In practice, the revocation caused France to suffer a kind of early brain drain, as it lost many skilled craftsmen, including key designers such as Daniel Marot. Upon leaving France, Huguenots took with them knowledge of important techniques and styles, which had a significant effect on the quality of the silk, plate glass, silversmithing, watchmaking and cabinet making industries of those regions to which they relocated. Some rulers, such as Frederick Wilhelm, Duke of Prussia and Elector of Brandenburg, who issued the Edict of Potsdam in late October 1685, encouraged the Protestants to seek refuge in their nations. Similarly, in 1720 Frederick IV of Denmark invited the French Huguenots to seek refuge in Denmark,[5] which they accepted, settling in Fredericia and other locations.[6][7]

In practice, the stringency of policies outlawing Protestants was opposed by the Jansenists[8] and was relaxed during the reign of Louis XV, especially among discreet members of the upper classes. "The fact that a hundred years later, when Protestants were again tolerated, many of them were found to be both commercially prosperous and politically loyal indicates that they fared far better than the Catholic Irish", R.R. Palmer concluded.[2]

By the late 18th century, numerous prominent French philosophers and literary men of the day, including Anne-Robert-Jacques Turgot, were arguing strongly for religious tolerance. Efforts by Guillaume-Chrétien de Malesherbes, minister to Louis XVI, and Jean-Paul Rabaut Saint-Étienne, a spokesman for the Protestant community, together with members of a provincial appellate court or parlement of the Ancien Régime, were particularly effective in persuading the king to open French society despite concerns expressed by some of his advisors. Thus, on 7 November 1787, Louis XVI signed the Edict of Versailles, known as the edict of tolerance registered in the parlement two-and-a-half months later, on 29 January 1788. The edict offered relief to the main alternative faiths of Calvinist Huguenots, Lutherans and Jews by giving their followers civil and legal recognition as well as the right to form congregations openly after 102 years of prohibition.

Full religious freedom had to wait two more years, with enactment of the Declaration of the Rights of Man and Citizen of 1789. The 1787 edict was a pivotal step in eliminating religious strife, however, and officially ended religious persecution in France.[9] Moreover, when French revolutionary armies invaded other European countries between 1789 and 1815, they followed a consistent policy of emancipating persecuted or circumscribed religious communities (Roman Catholic in some countries, Protestant in others and Jewish in most).

In October 1985, in the tricentenary of the Edict of Fontainebleau, French President François Mitterrand issued a public apology to the descendants of Huguenots around the world.[10]