Religion:Fruit of the Holy Spirit 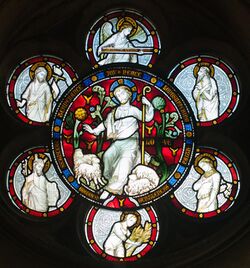 Stained glass window at Christ Church Cathedral in Dublin, depicting the Fruits of the Holy Spirit along with role models representing them, i.e. the Good Shepherd representing love, an angel holding a scroll of Gloria in excelsis Deo representing joy and Jesus Christ, Job representing longsuffering, Jonathan faith, Ruth gentleness and goodness, Moses meekness, and John the Baptist temperance. Executed by Hardman & Co. in the 1870s.[1]

The Fruit of the Holy Spirit is a biblical term that sums up nine attributes of a person or community living in accord with the Holy Spirit, according to chapter 5 of the Epistle to the Galatians: "But the fruit of the Spirit is love, joy, peace, patience, kindness, goodness, faithfulness, gentleness, and self-control."[2] The fruit is contrasted with the works of the flesh which immediately precede it in this chapter.

Aquinas pointed out that numbered among the fruits of the Holy Spirit are certain virtues, such as charity, meekness, faith, chastity, and kindness.[5] Augustine defined virtue as "a good habit consonant with our nature."[6]

Though out discussed as nine attributes of the Fruit of the Spirit, the original Greek term translated as "fruit" is singular. Aquinas explained, "Consequently fruit is mentioned there in the singular, on account of its being generically one, though divided into many species which are spoken of as so many fruits."[5] Augustine's commentary on Galatians 5:25-26 says, "the Apostle had no intention of teaching us how many [either works of the flesh, or fruits of the Spirit] there are; but to show how the former should be avoided, and the latter sought after."[5]

Agape (love) denotes an undefeatable benevolence and unconquerable goodwill that always seeks the highest good for others, no matter their behavior. It is a love that gives freely without asking anything in return and does not consider the worth of its object.[7][8] Agape is more a love by choice than Philos, which is love by chance; and it refers to the will rather than the emotion. Agape describes the unconditional love God has for the world. Paul describes love in 1 Corinthians 13:4–8:[9]

The Greek word ἀγάπη (agapē) occurs 117 times in 106 verses in the Greek concordance of the NASB.

The joy referred to here is deeper than mere happiness; it is rooted in God and comes from Him. Since it comes from God, it is more serene and stable than worldly happiness, which is merely emotional and lasts only for a time.

According to Strong's Greek Lexicon, the Greek word listed in the verse is χαρά (G5479), meaning 'joy', 'gladness', or a source of joy'. The Greek χαρά (chara) occurs 59 times in 57 verses in the Greek concordance of the NASB.

The word "peace" comes from the Greek word eirene, the Greek equivalent for the Hebrew word shalom, which expresses the idea of wholeness, completeness, or tranquility in the soul that is unaffected by the outward circumstances or pressures. The word eirene strongly suggests the rule of order in place of chaos.[13]

The Greek εἰρήνη (eirēnē) occurs 92 times in 86 verses in the Greek concordance of the KJV. The KJV translates Strong's G1515 in the following manner: peace (89x), one (1x), rest (1x), quietness (1x). The outline of Biblical usage is as follows:

Jesus is described as the Prince of Peace, who brings peace to the hearts of those who desire it. He says in John 14:27:[14] "Peace I leave with you, My peace I give to you; not as the world gives do I give to you. Let not your heart be troubled, neither let it be afraid". In Matthew 5:9 he says, "Blessed are the peacemakers, for they will be called sons of God."[15]

Generally the Greek world applied this word to a man who could avenge himself but did not. This word is often used in the Greek Scriptures in reference to God and God's attitude to humans.[16] Exodus 34:6 describes the Lord as "slow to anger and rich in kindness and fidelity."

Patience, which in some translations is "longsuffering" or "endurance", is defined in Strong's by two Greek words, makrothumia and hupomone.

The first, pronounced (mak-roth-oo-mee-ah) comes from makros, "long", and thumos, "temper". The word denotes lenience, forbearance, fortitude, patient endurance, longsuffering. Also included in makrothumia is the ability to endure persecution and ill-treatment. It describes a person who has the power to exercise revenge but instead exercises restraint. (Strong's #3115)

The latter, hupomone, (hoop-om-on-ay) is translated "endurance": Constancy, perseverance, continuance, bearing up, steadfastness, holding out, patient endurance. The word combines hupo, "under", and mone, "to remain". It describes the capacity to continue to bear up under difficult circumstances, not with a passive complacency, but with a hopeful fortitude that actively resists weariness and defeat, (Strong's #5281) with hupomone (Greek ὑπομονή) being further understood as that which would be "as opposed to cowardice or despondency"[17]

"With lowliness and meekness, with longsuffering, forbearing one another in love".[18]

In Greek, old wine was called "chrestos" which meant that it was mellow or smooth.[16] Christ used this word in Matthew 11:30, "For my yoke is easy, and my burden light."

Kindness is acting for the good of people regardless of what they do, properly, "useable, i.e. well-fit for use (for what is really needed); kindness that is also serviceable".[19]

Strong's #5544: Kindness is goodness in action, sweetness of disposition, gentleness in dealing with others, benevolence, kindness, affability. The word describes the ability to act for the welfare of those taxing your patience. The Holy Spirit removes abrasive qualities from the character of one under His control. (emphasis added)

The word kindness comes from the Greek word chrestotes (khray-stot-ace), which meant to show kindness or to be friendly to others and often depicted rulers, governors, or people who were kind, mild, and benevolent to their subjects. Anyone who demonstrated this quality of chrestotes was considered to be compassionate, considerate, sympathetic, humane, kind, or gentle. The apostle Paul uses this word to depict God's incomprehensible kindness for people who are unsaved (see Romans 11:22;[20] Ephesians 2:7;[21] Titus 3:4[22]).

One scholar has noted that when the word chrestotes is applied to interpersonal relationships, it conveys the idea of being adaptable to others. Rather than harshly require everyone else to adapt to his own needs and desires, when chrestotes is working in a believer, he seeks to become adaptable to the needs of those who are around him. (Sparkling Gems from the Greek, Rick Renner)

Kindness is doing something and not expecting anything in return. Kindness is respect and helping others without waiting for someone to help one back. It implies kindness no matter what. We should live "in purity, understanding, patience and kindness; in the Holy Spirit and in sincere love; in truthful speech and in the power of God; with weapons of righteousness in the right hand and in the left".[23]

Popular English Bibles (e.g. NIV, NASB, NLT) translate the single Greek word chrestotes into two English words: kindness and goodness. "Wherefore also we pray always for you, that our God would count you worthy of this calling, and fulfill all the good pleasure of his goodness, and the work of faith with power".[24] "For the fruit of the Spirit is in all goodness and righteousness and truth",[25] with agathosune being "found only in Biblical and ecclesiastical writings, uprightness of heart and life".[26]

The root of pistis[27] ("faith") is peithô,[28] that is to persuade or be persuaded, which supplies the core-meaning of faith as being "divine persuasion", received from God, and never generated by man. It is defined as the following: objectively, trustworthy; subjectively, trustful:—believe(-ing, -r), faithful(-ly), sure, true.[29]

"O Lord, thou art my God; I will exalt thee, I will praise thy name; for thou hast done wonderful things; thy counsels of old are faithfulness and truth".[30] "I pray that out of his glorious riches he may strengthen you with power through his Spirit in your inner being, so that Christ may dwell in your hearts through faith".[Eph 3:16-17]

The writer of the Letter to the Hebrews describes it this way: "Let us fix our eyes on Jesus, the author and perfecter of our faith, who for the joy set before him endured the cross, scorning its shame, and sat down at the right hand of the throne of God".[31]

"a disposition that is even-tempered, tranquil, balanced in spirit, unpretentious, and that has the passions under control. The word is best translated 'meekness,' not as an indication of weakness, but of power and strength under control. The person who possesses this quality pardons injuries, corrects faults, and rules his own spirit well".

"Brothers and sisters, if someone is caught in a sin, you who live by the Spirit should restore that person gently. But watch yourselves, or you also may be tempted".[Gal 6:1]

"Be completely humble and gentle; be patient, bearing with one another in love".[Eph 4:2]

The Greek word used in Galatians 5:23 is "enkrateia", meaning "strong, having mastery, able to control one's thoughts and actions."[33]