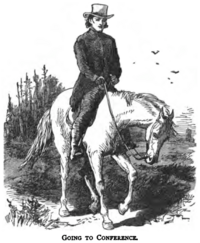 Illustration from The Circuit Rider: A Tale of the Heroic Age by Edward Eggleston depicting a Methodist circuit rider on horseback.

An itinerant preacher (also known as an itinerant minister or evangelist or circuit rider) is a Christian evangelist who preaches the basic Christian redemption message while traveling around to different groups of people within a relatively short period of time.[1] The usage of these travelling ministers is known as itineracy or itinerancy.[2][3]

Early 1st Century New Testament figures such as John the Baptist,[4] Jesus Christ and Apostle Paul were known for extensively traveling and preaching to unreached people groups in the Middle East and Europe, although often staying for longer periods than modern itinerant evangelists.

Starting in the eighteenth century, the Methodists were known for sending out itinerant preachers known as circuit riders to share the message.[5][6] The "chief peculiar usages" of Methodism, include the "Itinerancy, Class-meeting, Love-feast, and Watchnight."[7]