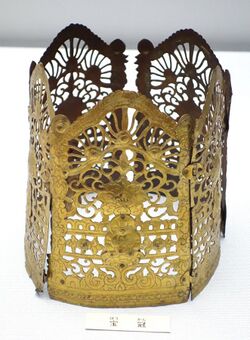 Kanjō (勧請) in Shinto terminology indicates a propagation process through which a kami, previously divided through a process called bunrei, is invited to another location and there reenshrined.[1]

Evolution of the kanjō process

Kanjō was originally a Buddhist term and later entered the Shinto vocabulary.[1] A kanjō was the request of the Buddha's sermon with a sincere heart, and later came to mean the urging of a buddha or bodhisattva to remain in this world to preach and save other human beings.[1] The concept then evolved further to mean the act (and the actual words) of asking buddhas or bodhisattvas to descend to the altar during a Buddhist service.[1] In Japan, the word gradually assumed the present meaning of enshrinement of a buddha or kami in a building for the first time.[1]

Before it can be transferred to its new location the kami must be divided. The division sub-process and the divided spirit itself are called bunrei (分霊), go-bunrei (御分霊) or wakemitama (分霊).[1] The process of propagation, described by the priests as akin to the lighting of a candle from another already lit, leaves the original kami intact in its original place and therefore doesn't alter any of its properties.[1] The wakemitama has all the qualities of the original and is therefore "alive" and permanent.[1] The process is used often, for example during Shinto festivals (Matsuri) to animate temporary shrines called mikisho (神酒所) and their mikoshi.[2]

The kami Inari has been subjected to the kanjō process more often than any other kami,[3] and is therefore a good example of its use.

The transfer does not necessarily take place from a shrine to another: the new location can be a privately owned object or an individual house. The case is recorded of Inari being re-enshrined in a fox hole[3][4] In fact, the first recorded Inari kanjō, in 842, involved the kami's transfer to Ono no Takamura scepter.[3] The kami was then transported to Mutsu no Kuni (Aomori) by its owner.[3] Some years later he returned to Kyoto, and Aomori's people asked him to leave the spirit behind, which he did in what would become Takekoma Inari.[3]

In 1194, Emperor Go-Toba decided that only Fushimi Inari Shrine could perform any of the parts of the Inari kanjō, however abuses were such that the shrine started providing an authenticity certificate with each divided spirit.[3] The process was briefly outlawed nationwide during the Meiji era, but was brought back by popular demand and nowadays most large Inari shrines will perform it for a fee, sometimes decided by the shrine, sometimes left to the discretion of the worshiper.[3] As of 1990, Fushimi Inari Shrine had performed it eighty thousand times for private citizens. [3] The faithful are often given the option to give a personal name to their personal kami. At Toyokawa Inari the worshiper can buy a statue and then participate in the ceremony, called kaigen, to animate it.[3]

When one of Inari's forms is reenshrined with a different name, it may also be worshiped for a specific function.[3] All the new functions are thereafter assumed to be specialties of the kami, particularly in case of a great success in the reenshrinement, even when those functions are very far from its original nature, as for instance fishing is in Inari's case.[3]