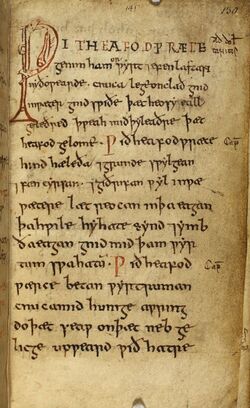 The Lacnunga ('Remedies') is a collection of miscellaneous Anglo-Saxon medical texts and prayers, written mainly in Old English and Latin. The title Lacnunga, an Old English word meaning 'remedies', is not in the manuscript: it was given to the collection by its first editor, Oswald Cockayne, in the nineteenth century.[1] It is found, following other medical texts, in London, British Library Harley MS 585, a codex probably compiled in England in the late tenth or early eleventh century. Many of its herbal remedies are also found, in variant form, in Bald's Leechbook, another Anglo-Saxon medical compendium.

The Lacnunga contains many unique texts, including numerous charms, some of which provide rare glimpses into Anglo-Saxon popular religion and healing practices. Among the charms are several incantations in Old English alliterative verse, the most famous being those known as For Delayed Birth, the Nine Herbs Charm and Wið færstice ('Against a sudden, stabbing pain'). There are also several charms in corrupt Old Irish.

Among the Latin prayers, the longest is a redaction of the Lorica of Laidcenn (formerly often known as the Lorica of Gildas). This seventh-century Irish poem, also preserved in other manuscripts, is a member of the lorica genre of protective prayers. This instance takes the form of an extended litany of body parts for which the speaker seeks the protection of Christ and a multitude of angels from the assaults of demons. It is accompanied in this manuscript by an interlinear gloss in Old English, which probably derives from an exemplar in the Mercian dialect.