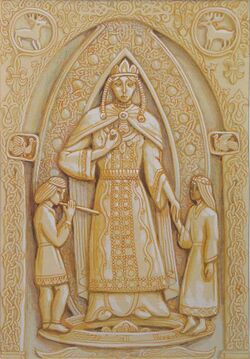 Lada is a goddess in Baltic and Slavic mythology associated with beauty and fertility. Her masculine counterpart is called Lado. Lada and Lado are sometimes seen as divine twins, and at other times as a mother goddess and her son. They are commonly mentioned together in songs related to planting, harvesting, and weddings. Together, Lada and Lado form one aspect of a multiple deity, whose other names and aspects relate to the Sun, water, and grain, respectively.

Worship of Lada and Lado is attested in Russia between the fifteenth and eighteenth centuries during springtime fertility rites, as well as in Polish church prohibitions on pagan rituals. Some scholars have suggested that Lada and Lado are not the names of deities, but simple refrains in songs and poetry. However, a number of songs and historical chronicles provide evidence for a cult of worship.

The origins of Lada in mythology are uncertain; she may derive from other Slavic or Baltic goddesses, or from the Greek Leto or Leda. The names Lada and Lado may be related to the Old Slavic word lad, 'harmony, peace, union'. 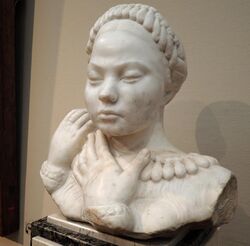 Lada is a goddess of beauty in Latvian, Lithuanian, and Slavic mythology.[2] The divine twins Lada and Lado together form one aspect of a fertility deity akin to the Greek Dionysus. The other names for this deity are Kupalo/Kupala, associated with water; Kostromo-Kostrobunko/Kostroma, associated with grain; and Iarilo/Iarila, associated with the Sun. Each of these aspects has both a masculine and feminine component. Lada and her male counterpart Lado are commonly referred to together, such as in songs sung by groups of women during planting, harvesting, or wedding ceremonies.[3][4]

Linda J. Ivanits writes in Russian Folk Belief that Lada originated in neolithic hunting culture and "remains especially mysterious" among documented pagan Slavic deities.[5] Depending on the source, Lada is thought to derive either from a Latvian goddess, or the Finno-Slavic Mokosh, or the Great Mother Goddess of the northern Letts (Latvians) and Mordvins. Other sources identify her with Loduna, the Scandinavian goddess of fire, the hearth, and herds.[3][4]

A seventeenth-century text names Lada as the mother of Lel and Polel, who are linked with the twins Castor and Pollux, the sons of Leda in Greek mythology. Another connection to Leda comes through association with the Polish twin deities Zizilia and Didilia, who are also associated with love and fertility.[3][4]

Some authors see the male Lado as a deity of the underworld and marriage.[5] The Oxford Companion to World Mythology describes Lada, like Iarilo, as a dying-and-rising deity.[6] By the eighteenth century, Lada had apparently assumed the role of mother goddess, with Lado (also called Dido or Dida) as her son and/or consort.[3][4] The Soviet archaeologist Boris Rybakov proposed that Lada and her daughter Leila were goddesses of spring, representing Slavic versions of the Greek Leto and her daughter Artemis, goddess of the hunt.[5] 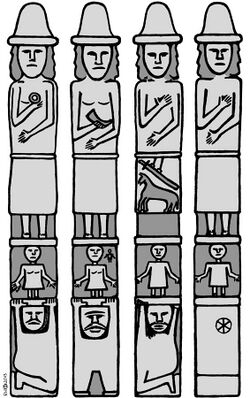 Figures on the 9th-century Zbruch Idol. Russian archaeologist Boris Rybakov proposed that Lada was depicted as the female figure holding a ring on the left.[2]

Russian monastic texts from the fifteenth to the eighteenth century mention girls worshipping a goddess named Lada and a phallic god called Lado. Worship was conducted in springtime, during the period of welcoming the rusalki, water spirits, into the villages and fields.[4] Lada was mentioned by Jan Długosz[7] and in the Kievan Synopsis of 1674 as a goddess from the time of Volodymyr the Great, but the first documentation of a cult of worship comes from fifteenth-century Polish church prohibitions of pagan rituals.[2] A postil by a rector at Cracow University circa 1405 reads:

[Translation] To this day they sing and dance [to] their gods: Lado, Yassa and others [...] surely not references to the Holy Father so can anything good come of this? Certainly not [...] One does not receive salvation through the names of Lada, Yassa, Quia or Nia [...] that incidentally are the names of the gods worshipped here in Poland as will attest cerain chronicles of the Poles.

Some scholars have suggested that Lada was merely a refrain in Slavic folk songs or poetry[2][5] and that no deity by that name was ever worshipped. However, similar musical refrains exist in all Slavic and some Baltic folklore, along with vernacular phrases such as laduvaty (in the Volhynia region, meaning to hold a wedding) that allude to the presence of a Lada cult.[2] Lithuanian songs refer to Lada as a "Great Goddess" and "Mother Lada".[4] The scholar and translator William Ralston Shedden-Ralston comments:

One writer has gone so far as to maintain that Lado and Lada are merely two of the meaningless refrains that occur in Russian songs. But the generally received idea is that Lado was the name of the Sun-god, answering to Freyr, and that Lada was the Slavonic counterpart of Freyja, the goddess of the spring and of love. In Lithuanian songs Lada is addressed as 'Lada, Lada, dido musu deve!' 'Lada, Lada, our great goddess!' And the epithet dido, or great, may account for the form Did-Lado, which frequently occurs in the Russian songs [...] In the songs of the Russian people the words lado and lada are constantly used as equivalents, in one case for lover, bridegroom, or husband, and in the other for mistress, bride, or wife.[9]

After the Christianization of the Slavs, veneration of Lada was transferred to the Virgin Mary.[9][10] According to Ralston:

On that account it is that the Servians [Serbians] call her 'Fiery Mary', and speak of her in their songs as the sister of Elijah the Thunderer, that is [the Slavic thunder god] Perun.[9]

The names Lada and Lado may be related to the Russian word lad; lad and ladit' mean, respectively, "harmony" and "to become on good terms with". Joanna Hubbs suggests that this was the role performed by young women welcoming the rusalki in springtime to invoke the fertility of nature.[11] According to Ralston, "Lad means peace, union, harmony, as in the proverb, 'When a husband and wife have lad, they don't require also klad (a treasure)'".[9]