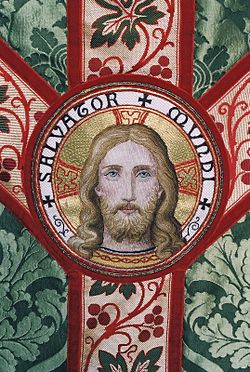 Green is the liturgical colour of the Ordinary Time

The word "ordinary" as used here comes from the ordinal numerals by which the weeks are identified or counted, from the 1st week of Ordinary Time in January to the 34th week that begins toward the end of November.[2]

After Eastertide the Ordinary Time resumes on the Monday after the Solemnity of Pentecost. In regional calendars where Whitmonday is a Day of Obligation, Ordinary Time and the use of the liturgical colour Green may begin on the following Tuesday. Depending on where the first Sunday of Advent falls between 27 November and 3 December, the Ordinary Time may have 33 or 34 weeks.

The decision to treat the whole of Ordinary Time as a unit led to abandonment of the previous terminology, whereby the Sundays of the first period were called Sundays after Epiphany and those of the second period Sundays after Pentecost.

The celebration of an Ordinary Time weekday gives way to that of any solemnity, feast, or obligatory memorial that falls on the same day, and may optionally be replaced by that of a non-obligatory memorial or of any saint mentioned in the Roman Martyrology for that day.

The solemnities, feasts, and commemorations of the General Roman Calendar which may, according to the Ranking of liturgical days in the Roman Rite, replace a Sunday of the Ordinary time are:[4]

The Universal Norms on the Liturgical Year and the General Roman Calendar also lists as proper solemnities (which outrank in the relevant church building or community Sundays in Ordinary Time):

Following the lead of the liturgical reforms of the Roman Rite, many Protestant churches also adopted the concept of an Ordinary Time alongside the Revised Common Lectionary, which applies the term to the period between Pentecost and Advent. However, use of the term is not common.

Those that have adopted the Revised Common Lectionary include churches of the Anglican, Methodist, Lutheran, Old Catholic and Reformed traditions.[5]

Some Protestant denominations set off a time at the end of Ordinary Time known as Kingdomtide or Season of End Times. This period can range anywhere from only the three Sundays prior to Christ the King (as in the Wisconsin Synod Lutheran) to 13 or 14 weeks (most notably in the United Methodist Church). The Church of England observes this time between All Saints and Advent Sunday.

In some traditions, what in the Roman Rite is the first period of Ordinary Time is called Epiphanytide (beginning on Epiphany Day in the Anglican Communion and Methodist churches)[6] and from Trinity Sunday to Advent is called Trinitytide.[7] In the Church of England, Sundays during "Ordinary Time" in this narrower sense are called "Sundays after Trinity", except the final four, which are termed "Sundays before Advent". In the Episcopal Church (United States), it is normal to refer to Sundays after Epiphany and Sundays after Pentecost (not Trinity).

The total number of Sundays varies according to the date of Easter and can range anything from 18 to 23. When there are 23, the Collect and Post-Communion for the 22nd Sunday are taken from the provision for the Third Sunday before Lent.