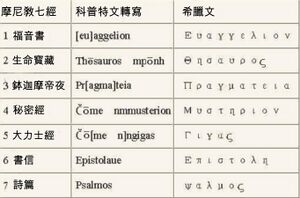 Mani realized that the religions before him had various drawbacks, and therefore determined to create a universal and unified religion. In Mani's view, the religions of the past can only be unified when their founders are alive. However, these founders did not write their own books, and when they died, their disciples had their own opinions, leading to division and chaos in their religion. "I have chosen a religion ten times greater than any previous religion. First, the previous religion was limited to one country and one language, but my religion is different. It will be popular in every country and adopt all languages. , Spread all over the world. Second, the past religions existed only when they had pure leaders, and once the leaders died, their religion immediately fell into chaos, and its precepts and writings were also ignored. But my religion But because there are living scriptures, there are missionaries, bishops, monks and lay believers, because they have wisdom and writings, they will last forever."[2]

In the Manichaean Compendium these seven scriptures are compared to ships: Power, make seven of them for sailing."[12]

For various reasons, Manichaeism no longer exists today, and none of the seven scriptures has been found in its entirety. Existing fragments of scriptures in Coptic, Middle Persian, Parthian, Sogdian, Uighur and other languages have been discovered, but their specific ownership needs to be further studied.

The Shabuhragan(Persian: شاپورگان‎ Shāpuragān), which means "[the] book of Shapur", was a sacred book of the Manichaean religion, written by the founder Mani (c. 210–276 CE) himself, originally in Middle Persian, and dedicated to Shapur I (c. 215–272 CE), the contemporary king of the Sassanid Persian Empire. The book was designed to present to Shapur an outline of Mani's new religion, which united elements from Zoroastrianism, Christianity, and Buddhism. Original Middle Persian fragments were discovered at Turpan, and quotations were brought in Arabic by Biruni: It is the only work of Mani's not written in Syriac[13]

"Da Er Zong Tu" is transliterated as "door lotus wing diagram" in "Yilue", which is derived from the Parthian word bungāhīg, which means "basic principle". This is an atlas illustrating the dualism of light and dark in Manichaeism. It was drawn by Mani and used to explain the doctrine to illiterate illiterate people. At this point, Mani believes that his religion is more superior than the previous ones: "Indeed, all the apostles, my brothers who came before me, did not write a book. Their wisdom is just like mine. They did not paint their wisdom in the pictures like me."[14]The importance of the Da Erzong Picture is second only to the Seven Dajing. In the Parthian language, this collection is also called "Ādrhang".[15] [16]

In the Christian literature, there is another saying of the "Four Sutras of Manichae", which is not mentioned in the accounts of Manichaeism or other religions. There are many errors and it is not enough to believe.