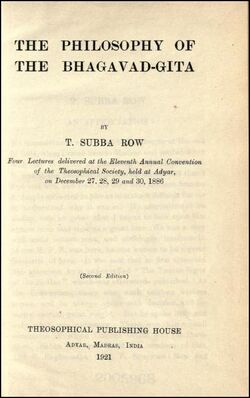 Subba Row's Book The Philosophy of the Bhagavad-Gita. Title page of the second edition.

Subba Row's writings are about Esotericism, Theosophy, the Zodiac, the theosophic septenary, the Chakras and other topics. His commentary on the Baghavad Gita is well known among theosophists. Blavatsky appreciated Subba Row's esoteric knowledge, and she asked him to review her book The Secret Doctrine.

Some of Subba Row's writings were previously published in The Theosophist, and in the book The Esoteric Writings, T. Subba Row (Theosophical Publishing House, Adyar).