The sawtooth wave (or saw wave) is a kind of non-sinusoidal waveform. It is so named based on its resemblance to the teeth of a plain-toothed saw with a zero rake angle. A single sawtooth, or an intermittently triggered sawtooth, is called a ramp waveform.

This sawtooth function has the same phase as the sine function.

While a square wave is constructed from only odd harmonics, a sawtooth wave's sound is harsh and clear and its spectrum contains both even and odd harmonics of the fundamental frequency. Because it contains all the integer harmonics, it is one of the best waveforms to use for subtractive synthesis of musical sounds, particularly bowed string instruments like violins and cellos, since the slip-stick behavior of the bow drives the strings with a sawtooth-like motion.[2]

A sawtooth can be constructed using additive synthesis. For period p and amplitude a, the following infinite Fourier series converge to a sawtooth and a reverse (inverse) sawtooth wave:

In digital synthesis, these series are only summed over k such that the highest harmonic, Nmax, is less than the Nyquist frequency (half the sampling frequency). This summation can generally be more efficiently calculated with a fast Fourier transform. If the waveform is digitally created directly in the time domain using a non-bandlimited form, such as y = x − floor(x), infinite harmonics are sampled and the resulting tone contains aliasing distortion. 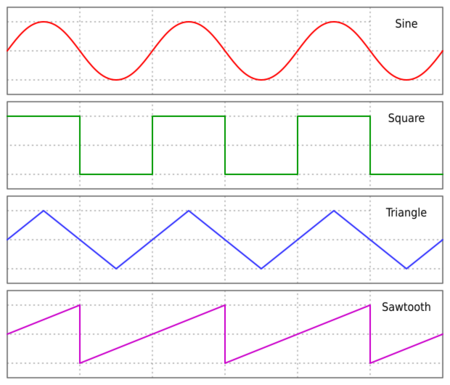