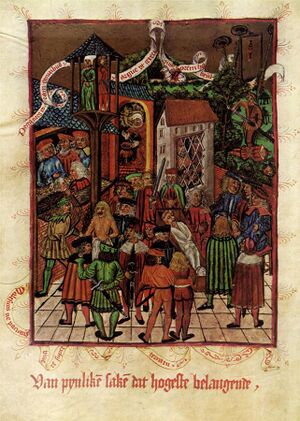 Cruentation (Latin: "ius cruentationis" or "Ius feretri sive sandapilae") was one of the medieval methods of finding proof against a suspected murderer. The common belief was that the body of the victim would spontaneously bleed in the presence of the murderer.

Cruentation was used in Germanic law systems as early as the medieval period, whence it spread to Germany, Poland, Bohemia, Scotland, and European colonies in North America.[1] In Germany it was used as a method to find proof of guilt until the middle of the 18th century.[2]

Early modern trials privileged explicit human testimony over forensic evidence, unless that evidence represented the testimony of a divine being (i.e., God).[3] But not all cases could be resolved simply by obtaining a confession; in cases where it was difficult for the jurors to determine whether someone accused of murder was guilty or innocent, the case could be solved by means of a trial by ordeal.[4] In the case of cruentation, the accused was brought before the corpse of the murder victim and was made to put his or her hands on it. If the wounds of the corpse then began to bleed or other unusual visual signs appeared, that was regarded as God's verdict, announcing that the accused was guilty.[5] At the same time, cruentation alone rarely convicted a suspect; more often, the psychological impact of the test caused the suspect to confess.[6]

Cruentation appears in many texts relating to criminal procedure: the Malleus Maleficarum, or King James' Daemonologie.[7][8] Nonetheless, contemporaries drew a distinction between cruentation and (to a modern observer) equally occult practices. Other forms of trial by ordeal vanished during the centuries before cruentation's demise, precisely because they (hubristically) effected divine judgement.[9]

As the practice of anatomical dissection became more prevalent, medical professions became increasingly aware of circumstances in which dead bodies could autochthonously emit fluids. Cruentative procedures became increasingly stringent,[10] and in 1545, Antonius Blancus was the first to question the reliability of cruentation as a practice.[11] Nonetheless, the first published refutation appeared in 1669, more than a century later.[12] Yet Alberti's Systema jurisprudentiae medicae [System of Forensic Medicine], published almost a century later, still encourages investigators to rely on torture and cruentation.[13]

The rise of anatomical approaches to sanguine emissions also coincided with disruption in the theological underpinnings of cruentation. After the Lutheran Reformation the practice of cruentation was unwarranted from a legal point of view in Denmark and Norway, and during the sixteenth and seventeenth centuries leading theologians of the Danish Church condemned it several times. Nevertheless, cruentation continued to be used well into the eighteenth century, and its outcome continued to be accepted as evidence by law courts – indeed, in a few cases, the ordeal was overseen or even organized by clergymen. Apparently the practice was so popular that it continued to remain judicially sanctioned for some time even when that meant circumventing the official teaching of the Protestant state church.[14]