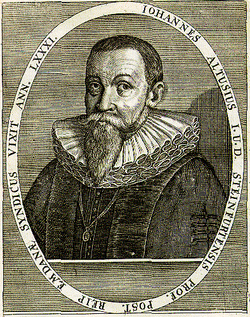 He is best known for his 1603 work, "Politica Methodice Digesta, Atque Exemplis Sacris et Profanis Illustrata".[lower-alpha 1] revised editions were published in 1610 and 1614. The ideas expressed therein relate to the early development of federalism in the 16th and 17th centuries and the construction of subsidiarity.

Althusius was born in 1563, to a family of modest means in Diedenshausen, County Sayn-Wittgenstein (Siegen-Wittgenstein),[1] a Calvinist County in what is now the state of North Rhine Westphalia (but was then the seat of an independent Grafschaft or County). Under the patronage of a local count, he attended the Gymnasium Philippinum in Marburg from 1577 and began his studies in 1581, concentrating in law and philosophy. He first studied Aristotle in Cologne, then he later studied law around 1585/86 under Denis Godefroy at Basel.[2] In 1586, Althusius received his doctorate in civil and canon law from the University of Basel. While studying at Basel, Althusius lived with Johannes Grynaeus for a period of time, with whom he studied theology.[2]

In 1586, after completing his studies, Althusius became the first professor of law at the Protestant-Calvinist Herborn Academy of Nassau County.[2] From 1592 to 1596, he taught at the Calvinist Academy in Burgsteinfurt/Westphalia, and was afterward appointed president of the Nassau College in Siegen (removed in this town from 1596 to 1600) in 1599/1600 and in Herborn in 1602,[1] also beginning his political career by serving as a member of the Nassau (Germany) county council. For the next several years, he became involved in various colleges throughout the area, variously serving as their president and lecturing on law and philosophy, and in 1603, he was elected to be a municipal trustee of the city of Emden, in East Frisia, where he ultimately made his fame. He became a city Syndic in 1604, which placed him at the helm of Emden's governance until his death.

In 1617, Althusius published his principal judicial work, Dicaeologicae. In this work, he categorized laws into types main types: natural laws and positive laws, and argued that natural law is "the will of God for men."[3] Althusius contended that terms such as "common law" and "moral law" were other names for natural law. In order to know the true dictates of natural law, he argued, we must carefully study Scripture and tradition, as well as revelation and reason.[4]

After his death, Althusius remained a controversial thinker. His Politica was attacked by Henning Arnisaeus and Hugo Grotius during the seventeenth century for its defense of local autonomies against the rise of territorial absolutism and proponents of the modern unitary nation state.[5]

By the time Althusius began his formal studies in 1581, the Dutch Revolt against Spain had already come to a head, and it was not to be settled until Dutch independence was recognized in 1609. Because the nature of the conflict was largely religious – Calvinist states rebelling against their Catholic overlords – it was of especial interest to Calvinist political thinkers such as Althusius.

In the late sixteenth and early seventeenth centuries, Emden in East Frisia (now Germany) was at the crossroads of political and religious activity in the region. A prosperous seaport situated between the Netherlands and the Holy Roman Empire, with convenient maritime access to England, Emden was a prominent city in the politics and policy of all three nations, and was thus able to retain a significant amount of political freedom. It was located within the overlapping territories of the Catholic Habsburg emperor and a Lutheran provincial lord, but its population was mainly Calvinist, and the city had a strong Calvinist spirit. Emden also played host to two Protestant synods, first in 1571 and again in 1610, and was widely regarded as the "Geneva of the North" or the "alma mater" of the Dutch Reformed Church. These attributes made the city the ideal place for Althusius to propose his particular brand of political philosophy; Emden's theological and political prominence coupled with its yen for religious and civic independence made the Althusian political theory both topical and popular.

He was married in 1596 in Siegen to Margarethe Neurath (born 1574), with whom he had at least six children.