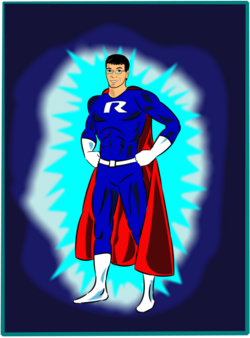 RETMAN is a comics’ character, associated to Rational Emotive Behavior Therapy (REBT). Through it, REBT tries more efficiently address children, adolescents and the general public. This form of therapy approaches the treatment of emotional disorders and the promotion of mental health by modifying maladaptive/irrational behaviors and cognitions (thoughts).

The first RETMAN concept was thought up at the Albert Ellis Institute, US, in the 80s (Calvin Merrifield and Rebecca Merriefield: Call Me Retman and Have a Ball, 1979) inspired by the name Rational Emotive Therapy (that is how this form of cognitive-behavioral psychotherapy was referred to then). The prototype for the superhero was Albert Ellis himself. As “RET-Man”, Ellis is arrested by the police but not before helping a depressed jilted lover give up his thoughts of suicide in favor of more rational thinking.[1] However, because of the high production costs at the time, the project was abandoned after the publication of a comic.

The concept was resumed in 2008, with the approval of the Albert Ellis Institute by a team of Romanian psychologists and graphic designers led by Prof. Daniel David, with a modern technology. For the first time they also investigated the efficiency of the concept in promoting psychological health and in the treatment of psychological disorders in children and adolescents (see "Meet RETMAN" [2]). The team developed the RETMAN concept in an innovative way, creating an entire system that includes: (1) therapeutic comics; (2) therapeutic stories; (3) therapeutic cartoons; and (4) the therapeutic system RoboRETMAN.[3]

The Retman technology is being used by (selection) The Child and Adolescent Psychiatric Clinic, UMF, Cluj-Napoca, the “PsyTech” University Psychological Clinic at Babes-Bolyai, Cluj-Napoca, kindergartens and private clinical psychology/counseling/psychotherapy practices in Romania.[4] It is also used on the REThink Project,[5] a research grant with the goal to design, develop, and evaluate a therapeutic video game accessible over the Internet, meant to be used primarily as a standalone application to promote emotional resilience in children and adolescents.

The concept was resumed by a team of designers and psychologists at the International Institute for the Advanced Studies of Psychotherapy and Applied Mental Health (link), led by “Aaron T.Beck” professor Daniel David. The institute was co-founded by the Albert Ellis Institute and Babes-Bolyai University. The concept put forward by this team was a completely changed one, using the character Superman as a model for Retman. A planet was created for Retman (Rationalia), as well as new adventures and a dangerous opponent (the evil sorcerer Irationalius) The stories of Retman are based on an original story, developed by dr. Daniel David: “...Retman was the ruler of Planet Rationalia from the System of Ataraxia in the Happiness Galaxy. He lived in a town called Equilibrium and was a Great Sorcerer Psychotherapist, who is a person who helps you when you suffer and teaches you how to be happy. The Great Sorcerer Psychotherapist practiced “Retmagic” (a rational-emotional therapeutic magic). This gift had been given to him by the Almighty Creator of the World. All the inhabitants of the planet were happy because they had everything they wanted, but mostly because they wanted only what they knew they deserved. The secret of their happiness was therefore their minds and their way of thinking. But while Retman fostered rational thinking on the planet, his enemy, the Sorcerer Irationalius became envious of his power and stole the minds of the inhabitants of the planet. They became mean and envious and the whole planet was overtaken by evil and despair. Then the Almighty Creator of the World, in anger, destroyed everyone, sparing just Retman, as he was the only person whose mind Irationalius could not steal. He was sent on Earth with the goal of teaching everyone here to be rational and happy, so they wouldn’t end up like the inhabitants of Rationalia...” The stories of Retman have been published in Romanian and English.