Tragicomedy is a literary genre that blends aspects of both tragic and comic forms. Most often seen in dramatic literature, the term can describe either a tragic play which contains enough comic elements to lighten the overall mood or a serious play with a happy ending.[1] Tragicomedy, as its name implies, invokes the intended response of both the tragedy and the comedy in the audience, the former being a genre based on human suffering that invokes an accompanying catharsis or pleasure and the latter being a genre intended to be humorous or amusing by inducing laughter. 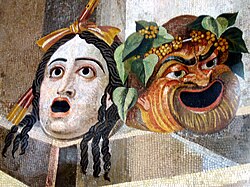 There is no complete formal definition of tragicomedy from the classical age. It appears that the Greek philosopher Aristotle had something like the Renaissance meaning of the term (that is, a serious action with a happy ending) in mind when, in Poetics, he discusses tragedy with a dual ending.[2] In this respect, a number of Greek and Roman plays, for instance Alcestis, may be called tragicomedies, though without any definite attributes outside of plot. The word itself originates with the Roman comic playwright Plautus, who coined the term somewhat facetiously in the prologue to his play Amphitryon. The character Mercury, sensing the indecorum of the inclusion of both kings and gods alongside servants in a comedy, declares that the play had better be a "tragicomoedia":[3]

Plautus's comment had an arguably excessive impact on Renaissance aesthetic theory, which had largely transformed Aristotle's comments on drama into a rigid theory. For "rule mongers" (the term is Giordano Bruno's), "mixed" works such as those mentioned above, more recent "romances" such as Orlando Furioso, and even The Odyssey were at best puzzles; at worst, mistakes. Two figures helped to elevate tragicomedy to the status of a regular genre, by which is meant one with its own set of rigid rules. Giovanni Battista Giraldi Cinthio, in the mid-sixteenth century, both argued that the tragedy-with-comic-ending (tragedia de lieto fin) was most appropriate to modern times and produced his own examples of such plays. Even more important was Giovanni Battista Guarini. Guarini's Il Pastor Fido, published in 1590, provoked a fierce critical debate in which Guarini's spirited defense of generic innovation eventually carried the day. Guarini's tragicomedy offered modulated action that never drifted too far either to comedy or tragedy, mannered characters, and a pastoral setting. All three became staples of continental tragicomedy for a century and more.

In England, where practice ran ahead of theory, the situation was quite different. In the sixteenth century, "tragicomedy" meant the native sort of romantic play that violated the unities of time, place, and action, that glibly mixed high- and low-born characters, and that presented fantastic actions. These were the features Philip Sidney deplored in his complaint against the "mungrell Tragy-comedie" of the 1580s, and of which Shakespeare's Polonius offers famous testimony: "The best actors in the world, either for tragedy, comedy, history, pastoral, pastoral-comical, historical-pastoral, tragical-historical, tragical-comical-historical-pastoral, scene individuable, or poem unlimited: Seneca cannot be too heavy, nor Plautus too light. For the law of writ and the liberty, these are the only men." Some aspects of this romantic impulse remain even in the work of more sophisticated playwrights: Shakespeare's last plays, which may well be called tragicomedies, have often been called romances.

By the early Stuart period, some English playwrights had absorbed the lessons of the Guarini controversy. John Fletcher's The Faithful Shepherdess, an adaptation of Guarini's play, was produced in 1608. In the printed edition, Fletcher offered an interesting definition of the term, worth quoting at length: "A tragi-comedie is not so called in respect of mirth and killing, but in respect it wants deaths, which is enough to make it no tragedy, yet brings some neere it, which is inough to make it no comedie." Fletcher's definition focuses primarily on events: a play's genre is determined by whether or not people die in it, and in a secondary way on how close the action comes to a death. But, as Eugene Waith showed, the tragicomedy Fletcher developed in the next decade also had unifying stylistic features: sudden and unexpected revelations, outré plots, distant locales, and a persistent focus on elaborate, artificial rhetoric.

Some of Fletcher's contemporaries, notably Philip Massinger and James Shirley, wrote successful and popular tragicomedies. Richard Brome also essayed the form, but with less success. And many of their contemporary writers, ranging from John Ford to Lodowick Carlell to Sir Aston Cockayne, made attempts in the genre.

Tragicomedy remained fairly popular up to the closing of the theaters in 1642, and Fletcher's works were popular in the Restoration as well. The old styles were cast aside as tastes changed in the eighteenth century; the "tragedy with a happy ending" eventually developed into melodrama, in which form it still flourishes.

Landgartha (1640) by Henry Burnell, the first play by an Irish playwright to be performed in an Irish theatre, was explicitly described by its author as a tragicomedy. Critical reaction to the play was universally hostile, partly it seems because the ending was neither happy nor unhappy. Burnell in his introduction to the printed edition of the play attacked his critics for their ignorance, pointing out that as they should know perfectly well, many plays are neither tragedy nor comedy, but "something between".

The more subtle criticism that developed after the Renaissance stressed the thematic and formal aspects of tragicomedy, rather than plot. Gotthold Ephraim Lessing defined it as a mixture of emotions in which "seriousness stimulates laughter, and pain pleasure." Even more commonly, tragicomedy's affinity with satire and "dark" comedy have suggested a tragicomic impulse in modern theatre with Luigi Pirandello who influenced Beckett. Also it can be seen in absurdist drama. Friedrich Dürrenmatt, the Swiss dramatist, suggested that tragicomedy was the inevitable genre for the twentieth century; he describes his play The Visit (1956) as a tragicomedy. Tragicomedy is a common genre in post-World War II British theatre, with authors as varied as Samuel Beckett, Tom Stoppard, John Arden, Alan Ayckbourn and Harold Pinter writing in this genre. Many writers of the metamodernist and postmodernist movements have made use of tragicomedy and/or gallows humor. A notable example of a metamodernist tragicomedy is David Foster Wallace's 1996 magnum opus, Infinite Jest.

Beginning with BoJack Horseman in 2014, the tragicomic genre has spread into the television medium. Television shows that are considered tragicomedies that have come after Bojack are One Mississippi, Horace and Pete, Fleabag, Barry, Dead to Me, and Kidding starring Jim Carrey.

Several tragicomic plays have been adapted for the big screen including Shakespeare's The Merchant of Venice. Tom Stoppard has also adapted his own play Rosencrantz and Guildenstern Are Dead into a movie of the same name.

Film director, Taika Waititi has made a name out of making tragicomedy films including his 2010 film Boy and his recent Adolf Hitler satire, Jojo Rabbit.

Other notable examples of tragicomedy films include Little Miss Sunshine, Inside Llewyn Davis, Eternal Sunshine of the Spotless Mind, Life Is Beautiful, and Good Bye, Lenin!.