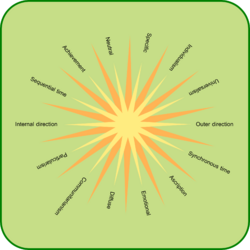 Trompenaars' model of national culture differences is a framework for cross-cultural communication applied to general business and management, developed by Fons Trompenaars and Charles Hampden-Turner.[1][2] This involved a large-scale survey of 8,841 managers and organization employees from 43 countries.[3]

Universalism is the belief that ideas and practices can be applied everywhere without modification, while particularism is the belief that circumstances dictate how ideas and practices should be applied. It asks the question, What is more important, rules or relationships? Cultures with high universalism see one reality and focus on formal rules. Business meetings are characterized by rational, professional arguments with a "get down to business" attitude. Trompenaars research found there was high universalism in countries like the United States, Canada, UK, Australia, Germany, and Sweden. Cultures with high particularism see reality as more subjective and place a greater emphasis on relationships. It is important to get to know the people one is doing business with during meetings in a particularist environment. Someone from a universalist culture would be wise not to dismiss personal meanderings as irrelevancies or mere small talk during such business meetings. Countries that have high particularism include Venezuela, Indonesia, China, South Korea, and the former Soviet Union.[4]

Individualism refers to people regarding themselves as individuals, while communitarianism refers to people regarding themselves as part of a group. Trompenaars research yielded some interesting results and suggested that cultures may change more quickly that many people realize. It may not be surprising to see a country like the United States with high individualism, but Mexico and the former communist countries of Czechoslovakia and the Soviet Union were also found to be individualistic in Trompenaars research. In Mexico, the shift from a previously communitarian culture could be explained with its membership in NAFTA and involvement in the global economy. This contrasts with Hofstede's earlier research, which found these countries to be collectivist, and shows the dynamic and complex nature of culture. Countries with high communitarianism include Germany, China, France, Japan, and Singapore.[5]

An example of these specific and diffuse cultural dimensions is provided by the United States and Germany. A U.S. professor, such as Robert Smith, PhD, generally would be called “Doctor Smith” by students when at his U.S. university. When shopping, however, he might be referred to by the store clerk as “Bob,” and he might even ask the clerk’s advice regarding some of his intended purchases. When golfing, Bob might just be one of the guys, even to a golf partner who happens to be a graduate student in his department. The reason for these changes in status is that, with the specific U.S. cultural values, people have large public spaces and often conduct themselves differently depending on their public role. At the same time, however, Bob has private space that is off-limits to the students who must call him “Doctor Smith” in class. In high-diffuse cultures, on the other hand, a person’s public life and private life often are similar. Therefore, in Germany, Herr Professor Doktor Schmidt would be referred to that way at the university, local market, and bowling alley—and even his wife might address him formally in public. A great deal of formality is maintained, often giving the impression that Germans are stuffy or aloof.[7][8][9]

A sequential time culture is the one in which the people like events to happen in a chronological order. The punctuality is very appreciated and they base their lives in schedules, plannification and specific and clear deadlines; in this kind of cultures time is very important and they do not tolerate the waste of time. Instead in synchronic cultures, they see specific time periods as interwoven periods, the use to highlight the importance of punctuality and deadlines if these are key to meeting objectives and they often work in several things at a time, they are also more flexible with the distribution of time and commitments.[11]