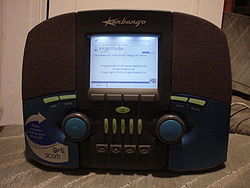 The "Kerbango Internet Radio" was a product, never released, that would allow users to listen to Internet radio without a computer.[1]

An Internet radio device, also called network music player is a hardware device that is capable of receiving and playing streamed media from either Internet radio stations or a home network.

Streaming media became mainstream with the advent of portable music players / MP3 player and the convenience of converting and compressing CD music into music file by the computer or the acquisition of products in such formats using on-line music stores like Amazon, iTunes, and 7digital.

The network music player is connected to a home router. For convenience a wireless router is often used. The router is connected to the internet and thus enables access to Internet streaming resources. Alternatively, the home network can access the user's collection of music on a computer or on a network-attached storage (NAS) device dedicated to store a user's music files.

Audio streaming is one way of transmitting audio files on a continuous feed to a network music player. A common way today is to stream the audio from the computer to a network music player over the more convenient wireless technologies such as Wi-Fi in a networked environment. The computer, which is typically used for storing the music file, acts as a music server by means of server software, often compliant to DLNA (Digital Living Network Alliance) standard. And the network music player is a typical receiver which starts playing an audio file as soon as some of the data has been received so that one does not have to wait for the entire audio file to finish downloading.

Internet reaches many areas in the world, and thus does Internet radio. It has expanded enormously with an estimated 19,000 stations currently available, including many traditional FM /AM simulcasting their content over the Internet.

Station directory services keep a current list of active Internet radio stations, their URI and streaming formats and list them sorted by genre, location, language and other criteria. Many devices use either proprietary vendor-specific station list servers or dedicated directory services.

There are generally two types of network music players:

Some devices also have: