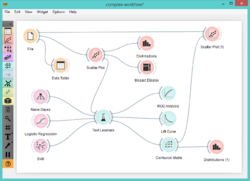 A typical workflow in Orange 3.

Orange components are called widgets and they range from simple data visualization, subset selection, and preprocessing, to empirical evaluation of learning algorithms and predictive modeling.

Visual programming is implemented through an interface in which workflows are created by linking predefined or user-designed widgets, while advanced users can use Orange as a Python library for data manipulation and widget alteration.[5]

Orange is an open-source software package released under GPL. Versions up to 3.0 include core components in C++ with wrappers in Python are available on GitHub. From version 3.0 onwards, Orange uses common Python open-source libraries for scientific computing, such as numpy, scipy and scikit-learn, while its graphical user interface operates within the cross-platform Qt framework.

Orange is supported on macOS, Windows and Linux and can also be installed from the Python Package Index repository (pip install Orange3).

Orange consists of a canvas interface onto which the user places widgets and creates a data analysis workflow. Widgets offer basic functionalities such as reading the data, showing a data table, selecting features, training predictors, comparing learning algorithms, visualizing data elements, etc. The user can interactively explore visualizations or feed the selected subset into other widgets. 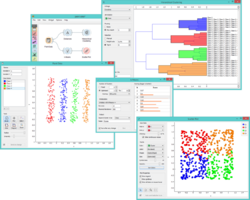 Paint Data widget in combination with hierarchical clustering and k-Means.

The program provides a platform for experiment selection, recommendation systems, and predictive modeling and is used in biomedicine, bioinformatics, genomic research, and teaching. In science, it is used as a platform for testing new machine learning algorithms and for implementing new techniques in genetics and bioinformatics. In education, it was used for teaching machine learning and data mining methods to students of biology, biomedicine, and informatics.

Various projects build on Orange either by extending the core components with add-ons or using only the Orange Canvas to exploit the implemented visual programming features and GUI.