Swatch Internet Time (or .beat time) is a decimal time concept introduced in 1998 by the Swatch corporation as part of their marketing campaign for their line of "Beat" watches.

Instead of hours and minutes, the mean solar day is divided into 1000 parts called ".beats". Each .beat is equal to one decimal minute in the French Revolutionary decimal time system and lasts 1 minute and 26.4 seconds (86.4 seconds) in standard time. Times are notated as a 3-digit number out of 1000 after midnight. So, for example @248 would indicate a time 248 .beats after midnight representing 248/1000 of a day, just over 5 hours and 57 minutes.

There are no time zones in Swatch Internet Time; instead, the new time scale of Biel Meantime (BMT) is used, based on Swatch's headquarters in Biel, Switzerland and equivalent to Central European Time, West Africa Time, and UTC+01. Unlike civil time in Switzerland and many other countries, Swatch Internet Time does not observe daylight saving time.

Swatch Internet Time was announced on 23 October 1998, in a ceremony at the Junior Summit '98, attended by Nicolas G. Hayek, President and CEO of the Swatch Group, G.N. Hayek, President of Swatch Ltd., and Nicholas Negroponte, founder and then-director of the MIT Media Lab. During the Summit, Swatch Internet Time became the official time system for Nation1, an online country (supposedly) created and run by children. 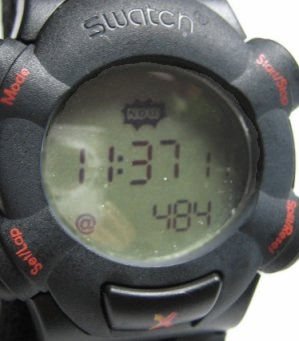 A Swatch watch showing .beat time in the bottom part of the display

During 1999, Swatch produced several models of watch, branded "Swatch .beat", that displayed Swatch Internet Time as well as standard time, and even convinced a few websites (such as CNN.com) to use the new format.[1] PHP's date() function has a format specifier 'B' which returns the Swatch Internet Time notation for a given time stamp.[2] It is also used as a time reference on ICQ, and the online role-playing game Phantasy Star Online has used it since its launch on the Dreamcast in 2000 to try to facilitate cross-continent gaming (as the game allowed Japanese, American and European players to mingle on the same servers). In March 2001, Ericsson released the T20e, a mobile phone which gave the user the option of displaying Internet Time. Outside these areas, it is infrequently used. While Swatch still offers the concept on its website, it no longer markets beat watches. In July 2016, Swatch released Touch Zero Two, its second wirelessly connected watch, with Swatch Internet Time function.

In early 1999, Swatch began a marketing campaign about the launch of their Beatnik satellite, intended to service a set of Internet Time watches. They were criticized for planning to use an amateur radio frequency for broadcasting a commercial message (an act banned by international treaties). The satellite was intended to be deployed by hand from Mir. Swatch reallocated the transmitter batteries to a different function on Mir, thus the satellite never broadcast.[3]

The concept was touted as an alternative, decimal measure of time. One of the supposed goals was to simplify the way people in different time zones communicate about time, mostly by eliminating time zones altogether.

Instead of hours and minutes, the mean solar day is divided into 1,000 parts called ".beats". Each .beat lasts 1 minute and 26.4 seconds. One .beat is equal to one decimal minute in French decimal time.

Although Swatch does not specify units smaller than one .beat, third party implementations have extended the standard by adding "centibeats" or "sub-beats", for extended precision: @248.00. Each "centibeat" is a hundredth of a .beat and is therefore equal to one French decimal second (0.864 seconds).[4][5]

There are no time zones; instead, the new time scale of Biel Meantime (BMT) is used, based on the company's headquarters in Biel, Switzerland. Despite the name, BMT does not refer to mean solar time at the Biel meridian (7°15′E), but to the standard time there. It is equivalent to the Central European Time and West Africa Time or UTC+1.

Like UTC, Swatch Internet Time is the same throughout the world. For example, when the time is 875 .beats, or @875, in New York, it is also @875 in Tokyo: 0.875 × 24 hours = 21:00 BMT = 20:00 UTC. Unlike civil time in most European countries, Internet Time does not observe daylight saving time and thus it matches Central European Time during (European) winter and Western European Summer Time, which is observed by the United Kingdom, Ireland, Portugal and the Canary Islands (Spain), during summer.

The most distinctive aspect of Swatch Internet Time is its notation; as an example, "@248" would indicate a time 248 .beats after midnight, equivalent to a fractional day of 0.248 CET, or 04:57:07.2 UTC. No explicit format was provided for dates, although the Swatch website formerly displayed the Gregorian calendar date in the order day-month-year, separated by periods and prefixed by the letter d (d31.01.99).

Note that units smaller than 1 .beat are not officially recognized by the standard.

The formula for calculating the current time in .beats from UTC+1 is:

Round down the outcome.[6]