Volumes relating to legal history published by the Selden Society

Members of the society (private individuals or institutions) pay an annual subscription, in return for which they either automatically receive a copy of each volume as it is published, or (as in the case of, for example, the Royal Historical Society) are eligible to purchase volumes at favourable members' rates. Some societies attempt to keep to a regular cycle of publishing (generally one volume per year, as in the case of the London Record Society and the Canterbury and York Society: the Royal Historical Society, exceptionally, aims for two volumes per year). Others, however, publish on an irregular and occasional basis, as the completion of editorial work allows. Volumes are usually also made available for sale to non-members, but the price is invariably higher than that paid (either as the retail price or through subscriptions) by members, thereby establishing an incentive for interested parties to join. The model originated and is most commonly found in the United Kingdom , but has also been adopted in other countries.

In the 19th century, when many of the societies were founded, they were sometimes known as book clubs. They have also been termed printing clubs.[1] Those that publish exclusively archival material are often known as record societies or records societies.

The principle of subscription publishing – that is, of funding the publication of a volume by securing multiple advance subscriptions from individuals interested in buying the final product – was first established in the 17th century, and routinely adopted during the 18th.[2][3] The idea of extending the model to the membership of a society was initiated by the Roxburghe Club, founded in 1812 as a convivial association of bibliophiles, but which rapidly introduced the principle that each member should sponsor the publication of an edition of a rare work of interest to members, and that other volumes would be published by the Club collectively. In both cases, the volumes were intended for distribution to the entire membership. The Club's first publication, donated by Sir William Bolland and issued in 1814, was the Earl of Surrey's translation of parts of Virgil's Aeneid, originally printed in 1557.

One early Roxburghe Club member (from 1822) was Sir Walter Scott, who was inspired by it to establish the Bannatyne Club to print works of interest for Scottish tradition, literature, and history. Other special-interest societies followed. In contrast to the exclusive Roxburghe Club (which had an elite membership and issued its publications as luxurious limited editions), most had broad membership criteria, and had as their primary objective the dissemination of valuable historical texts as widely as possible.[4] Nevertheless, their activities tended to appeal to the "monied and educated" classes: in 1838, 20% of the Camden Society's members were clergymen, 9% held legal qualifications, and 36% were Fellows of the Society of Antiquaries.[5]

Success being dependent on fund-raising and the attraction of new members, the early societies often suffered from financial and organisational troubles. Controversy followed Frederick James Furnivall, a prime mover in many of the early ventures. In the second half of the 19th century the government-sponsored Rolls Series took over some of the territories of the amateur societies, particularly in respect of the publication of chronicles.[6] The productions of several of the early societies included literary texts, but by the end of the 19th century, the majority of societies were tending to focus instead on the publication of archival records. This continued to be the pattern in the 20th century.

The Durham-based Surtees Society, founded in 1834 and modelled in part on the Scottish Bannatyne and Maitland Clubs,[7] was the first English society to adopt a specifically regional remit, in its case the elucidation of the history of the area constituting the ancient kingdom of Northumbria. Its establishment was deeply rooted in local pride: in an early prospectus, James Raine (its principal founder and first secretary) drew attention to just a few unpublished manuscripts of Durham interest, "which, in these times, few individuals would incur the risk of printing at their own cost; but which nevertheless, afford even singly, how much more collectively, the most valuable materials to those who are anxious to study rightly the History of our forefathers under its different characters".[8] The Chetham Society, founded in 1843, concerned itself in much the same way with the counties of Lancashire and Cheshire. From the 1880s onwards, many societies focused on a single county. A particularly energetic advocate was W. P. W. Phillimore, who was active in the foundation of the British Record Society, Scottish Record Society, Thoroton Society, Canterbury and York Society, and Irish Record Society.[9] 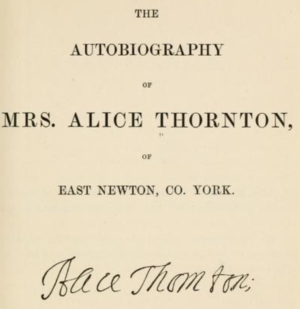 Title page of Alice Thornton's autobiography, dating from the 17th century and published by the Surtees Society in 1875

Defunct, or no longer active in text publication