A page from the Bhavishyottara section of Bhavishya Purana (Sanskrit, Devanagari)

The Bhavishya Purana (Bhaviṣya Purāṇa, lit. "Future Purana") is one of the eighteen major works in the Purana genre of Hinduism, written in Sanskrit.[1][2] The title Bhavishya means "future" and implies it is a work that contains prophecies regarding the future, however, the "prophecy" parts of the extant manuscripts are a modern era addition and hence not an integral part of the Bhavishya Purana.[3][4] Those sections of the surviving manuscripts that are dated to be older, are partly borrowed from other Indian texts such as Brihat Samhita and Shamba Purana.[3][5] The veracity and authenticity of much of the Bhavishya Purana has been questioned by modern scholars and historians, and the text is considered an example of "constant revisions and living nature" of Puranic genre of Hindu literature.[6][7]

The text exists in many inconsistent versions, wherein the content as well as their subdivisions vary, and five major versions are known.[4] Some manuscripts have four Parvan (parts), some two, others don't have any parts.[1][3] The text as it exists today is a composite of material ranging from medieval era to very recent. The available versions of Bhavishya Purana are based on a printed text published during the British colonial era.

The first 16 chapters of the first part of the Bhavisya Purana is called Brahmaparvan. It shows similarities to, and likely borrowed verses from some version of the Manusmriti.[3][8] However, some of the caste-related and women's rights related discussion in the Bhavishya Purana is egalitarian and challenge those found in the 19th-century published manuscripts of the Manusmriti.[9][10][11] The Brahmaparvan part of the Bhavishya Purana includes a 169 chapters compendium of Surya (Sun god) related literature, that overlaps with Zoroastrianism-related views.[5] These Sun-related sections are a notable and important part of the Bhavishya Purana, and it may be related to the migration or interaction between people of Persia and central Asia with those in Indian subcontinent.[12][13]

The second part of the text, called Madhyamaparvan, is a Tantra-related work.[6] The "prophecy"-related third part Pratisargaparvan includes sections on Christianity, Islam, Bhakti movement, Sikhism, British rule, and considered by scholars as a 19th-century creation.[14][5] The fourth part of the text called Uttaraparvan, is also known as Bhavishyottara Purana. This last part describes festivals related to various Hindu gods and goddesses and their Tithis (dates on lunar calendar), as well as mythology and a discussion of Dharma particularly vrata (vow) and dana (charity).[14][5] The text also has many Mahatmya chapters on geography, travel guide and pilgrimage to holy sites such as Uthiramerur,[15][16] and is one of the Tirtha-focussed Puranas.[17]

In records of land grants of the fifth century CE verses are quoted which occur only in the Padma, Bhavishya, and Brahma Puranas, and on this basis Pargiter in 1912 assigned these particular Puranas to the early centuries CE. Moriz Winternitz considers it more probable that these verses, both in the inscriptions and in the puranas, were taken as quotations from earlier dharmaśāstras, and thus argues that chronological deductions cannot be made on that basis.[18]

Some manuscripts of the Bhavishya Purana assert that it has five parts (Sanskrit: parvans),[21] but the extant printed editions contain four parts (Brāhma, Madhyama, Pratisarga, and Uttara).[22] These four parts have distinctive content and dating.

The Brahmaparvan contains 215 chapters, the Madhyamaparvan has three sections with a cumulative total of 62 chapters, the Pratisargaparvan has four sections with 7, 35, 32 and 26 chapters sequentially, and the Uttaraparvan has 208 chapters. Some manuscripts of the text do not have these Parvans and have different number of chapters.[3] The Madhyamaparvan part is a Tantra-related work, while the "prophecy"-related third part Pratisargaparvan is likely a 19th-century creation.[3][5]

The text is sometimes titled Bhaviṣyat Purāṇa.[2] In the Padma Purana,[23] it is classified in the rajas category, which contains puranas related to Brahma.[24][25][26] Scholars consider the Sattva-Rajas-Tamas classification as "entirely fanciful" and there is nothing in this text that actually justifies this classification.[27]

Despite being labelled a purana or "tales of ancient times", the work relates only a few legends. It is one of several puranas in which a list of royal dynasties of the "past" are followed by lists of kings predicted to rule in the future.[28] 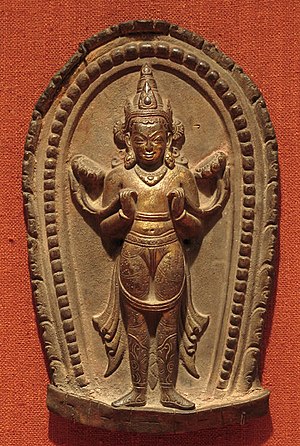 This part of the text has 215 chapters.[3] It covers topics such as rites of passage, ceremonies and feasts.[29] It also covers the duties and rights of women, a discussion on the nature of people and how to identify good and bad characters, and a caste-related discussion. According to Arora, and other scholars,[30][11] the caste-related and women's rights related discussion in the Bhavishya Purana is egalitarian, similar to those found in Brahma Purana and Vajrasuchi Upanishad, all three of which challenge the views expressed in the Manusmriti.[9][10][31][30]

The Brahmaparvan also includes sections on festival dates and methods for worshipping Brahma, Ganesha, Skanda, and the Nāga.[3][32] A considerable section deals with Sun worship in a place called "Śākadvīpa" which may be a reference to Scythia.[33][34] This overlaps with Zoroastrianism-related views,[5] and may be related to ancient migration or interaction between Persia and central Asia with Indian subcontinent.[12][35] These chapters are the most comprehensive and important source of sun-worship tradition in India, and may be related to the escape and resettlement of people from Persia into western India during the mid to late medieval era.[36]

The text in Brāhmaparvan is largely taken from the Samba Purana which is regarded to be older.[37][38] R.C. Hazra in his Studies in the Upapuranas dates Sambapurana between 650 and 850 AD.[39]

The second part of the Bhavisya Purana has 62 chapters on Tantra.[3]

This is not mentioned in other Indian text, states Hazra, to have been a part of the Bhavishya Purana, and therefore he states that it may be "a late appendage" abounding in Tantric theories of the 2nd-millennium.[40] However, states Rocher, the tantra sections of this Purana were likely part of the text by about 1500 CE.[41]

The Pratisarga parvan has 100 chapters,[3] which deal with topics such as the genealogy of the kings and sages, and prophecies.[6] It is written as a universal history with the first and the second chapters (called Khandas) dealing with old time, the third part with the medieval, and the fourth with the new age.[42] This section has led numerous scholars to question the authenticity of much of the Bhavishya Purana, and as evidence that these Puranas were not scriptures, but rather a document of history that was constantly revised and thus of a living nature, both over time and over geography.[43][44][42]

This varga specially has drawn intense criticism and incurred the ire of most vedic scholars who questioned the veracity of much of this section as being ancient. Research has confirmed significant corruption of this section with historical narratives over the last few centuries.[citation needed] Alf Hiltebeitel, who has researched these claims and translated and summarized this part of the Bhavisya Purana,[42] considers that 1839 marks the terminus a quo (completed after a year) for the text's history of the Mughals and the same terminus a quo would apply to Pratisargaparvan's first khanda Genesis-Exodus sequence, and the diptych in the section concerning "Isha Putra" (Jesus Christ) and Muhammad (as the incarnation of the demon Tripurasura) in its third chapter.[45] Further, mention of Queen Victoria's palaces, Calcutta and several 18th century historic events place the terminus ad quem (completed before a year) at mid to late 19th Century.[46][47] Hiltebeitel states that this part of the Bhavisya Purana was mostly likely composed in the 19th century.[48]

The Uttaraparvan is large with 208 chapters.[3] Though nominally attached to the Bhavishya Purana, is usually considered to be an independent work, also known as the Bhaviṣyottara Purāṇa, and as such is included among the Upapuranas (Lesser Puranas).[49] The Bhaviṣyottara Purana is primarily a handbook of religious rites with a few legends and myths.[50] Rajendra Hazra characterizes it as "a loose collection of materials taken from various sources" that is lacking in many of the traditional five characteristics of a purana, but which offers an interesting study of vows, festivals, and donations from sociological and religious point of view.[51]