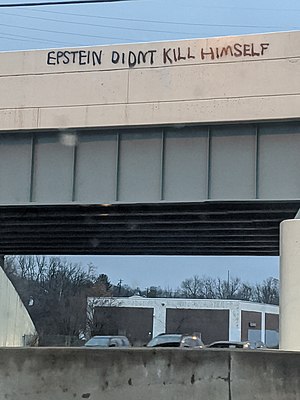 The phrase Epstein didn't kill himself refers to the theory surrounding the death of Jeffrey Epstein that disputes the official account of suicide by hanging. Epstein was a financier and convicted sex offender with connections to several other powerful and wealthy figures, and his reported suicide generated numerous theories about the nature and cause of his death. The meme first gained traction in November 2019 as more of the circumstances around his death became public.

The central idea is to include the phrase "Epstein didn't kill himself" in unexpected contexts like a photo caption of painter Bob Ross[1] or at the end of post as a non sequitur.[2][3] The meme has appeared at multiple televised sports games in the form of signs and painted bodies.[4][5][6] Several people have also randomly interjected the phrase at the end of interviews.[1][7] It is used by individuals on all sides of the political spectrum without agreement on the specific details of Epstein's death.[6][8][9] 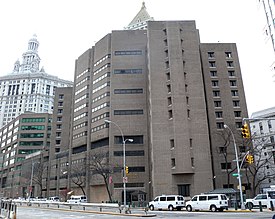 On August 10, 2019, American financier and convicted sex offender Jeffrey Epstein was found unresponsive in his Metropolitan Correctional Center jail cell, where he was awaiting trial on new sex trafficking charges. According to the Department of Justice, Federal Bureau of Prisons official statement, "He was transported to a local hospital for treatment of life-threatening injuries and subsequently pronounced dead by hospital staff."[10] The New York City medical examiner ruled Epstein's death a suicide.[11] Epstein's lawyers challenged that conclusion and opened their own investigation.[12] Epstein's brother Mark hired Michael Baden to oversee the autopsy. In late October, Baden announced that autopsy evidence was more indicative of homicidal strangulation than suicidal hanging.[13] Both the FBI and the U.S. Department of Justice's inspector general conducted investigations into the circumstances of his death, and the guards on duty were later charged with conspiracy and record falsification.[14]

Due to violations of normal jail procedures on the night of his death[note 1] and Epstein's claimed knowledge of compromising information about influential people, his death generated doubt about his apparent suicide and speculation that he was murdered.[4][17][18]

"Epstein didn't kill himself"
Seemingly overnight, those last four words, or something close to them, were everywhere: Belted out in videos posted by teenagers to TikTok, the social media platform beloved by Generation Z. Hacked into a roadside traffic sign in Modesto, Calif. Uttered by a University of Alabama student during a live report on MSNBC, hours before the president was set to appear at the school's football game.

The meme on a sticker at a bus stop in Halifax, Canada

At the end of an interview with Jesse Watters on Fox News, former Navy SEAL and founder of the Warrior Dog Foundation Mike Ritland asked if he could give a "PSA". After being told that he could, he stated, "If you see the coverage [about combat dogs] and you decide I want one of these dogs, either buy a fully trained and finished dog from a professional or just don't get one at all. That, and Epstein didn't kill himself."[21][22] Ritland later stated his purpose for suddenly mentioning the phrase was to keep the Jeffrey Epstein story alive.[4][23] According to The Washington Post , the meme gained a large amount of attention in the immediate aftermath of this interview.[19][20]

Arizona Republican Congressman Paul Gosar shared the meme in a series of 23 tweets where the first letter of each tweet spelled out the phrase.[4][24] Australian rapper Matthew Lambert of Hilltop Hoods, after winning the 2019 ARIA Music Award for Best Australian Live Act, included the phrase in his acceptance speech.[25]

In his opening monologue at the 77th Golden Globe Awards, host and comedian Ricky Gervais joked that the suicidal character of his show After Life will come back for a second season. He added: "So in the end, he didn't kill himself — just like Jeffrey Epstein," and told the audience of Hollywood celebrities: "I know he's your friend, but I don't care".[26]

The meme has been shared by individuals on a number of platforms including Facebook and Twitter.[27] Podcast host Joe Rogan and internet personality Tank Sinatra used Instagram to spread the meme to their followers,[28] which in Rogan's case had included Mike Ritland.[23] The "Epstein didn't kill himself" meme also has appeared in TikTok videos,[1][20] which notably is frequented by a younger user base.[20]

Several users on dating apps, such as Tinder and Hinge, have written in their profiles that whether or not a someone accepts the premise of the meme is a relationship deal breaker.[29] In the 2020 Mardi Gras celebration in New Orleans, a Le Krewe d'Etat parade float featured a large float with effigies of Epstein and Hillary Clinton.[30][31]

Computer programmer, businessman, and Presidential candidate John McAfee announced the release of an Ethereum-based token named after the meme. He had previously expressed doubts about Epstein's death.[36] Also known as WHACKD,[37] 700 million tokens of the cryptocurrency were released to 8,000 users following its airdrop.[2]

Holiday-theme merchandise, such as Christmas jumpers, which prominently feature the phrase also became available for sale through several online retailers.[28][38] In an interview with Slate, independent merchandisers indicated that the Christmas/Epstein product lines were selling comparatively well and cited the mashup's dark humor for its internet popularity.[38] According to Variety, the Christmas-themed paraphernalia was reportedly outselling Game of Thrones merchandise.[2]

The phrase has been connected to several incidents of vandalism including its appearance "on road signs and overpasses around the country."[2] One specific incident saw the meme painted on 7-foot-high boulder and visible to travellers on Washington State Route 9 in Snohomish,[2] causing a bit of controversy in the local community.[39]

The site of a popular art piece at the Art Basel in Miami, Comedian,[note 2] a banana that had been duct-taped to a wall, was vandalized when Roderick Webber of Massachusetts wrote "Epstien [sic] didn't kill himself" in red lipstick on wall which Comedian had previously occupied.[2][40] Webber was arrested for criminal mischief,[41] and he reportedly spent a night in jail.[42]

NPR's Scott Simon compared the bait-and-switch aspect of the meme to rickrolling.[8] He also worried that doing a news story about the meme could spread misinformation.[8] Federal prosecutors have tried to discourage the spread of the theory, but the Associated Press reported, "[t]he phrase 'Jeffrey Epstein didn't kill himself' has taken on a life of its own—sometimes more as a pop culture catchphrase than an actual belief."[43]

Writer James Poulos cited the advancement of social media and growing populist sentiments for the meme.[3] Commentators have also suggested that growing distrust of government and the elite played a large factor in its popularity as well.[5][9][28] Jeet Heer with The Nation has expressed his worries that this could lead to the meme becoming a useful tool for recruitment for the far-right;[19] but Adam Bulger, in a featured article for BTRtoday, dismissed Heer's concerns and encouraged the Democratic Party to embrace the meme.[44]

In an article for Mel Magazine published shortly before the Fox News interview, Miles Klee wrote that there were numerous factors for the meme's rise online; among these included a "simmering resentment" and a lack of justice for Epstein's victims.[45][46] He further explained that a large attraction of sharing the "Epstein didn't kill himself" meme was it served as a method to keep the Epstein story within the news cycle.[27][46] Author Anna Merlan has instead argued that the meme over time tends to trivialize the concerns of Epstein's victims.[1] However, she mentioned that Jane Doe 15,[note 3] who on November 19, 2019 publicly alleged that Jeffrey Epstein had raped her,[note 4] wore a bracelet featuring the phrase "Epstein didn't kill himself" at a public press conference to possibly indicate her belief in the theory.[1]

Cite error: <ref> tags exist for a group named "note", but no corresponding <references group="note"/> tag was found, or a closing </ref> is missing