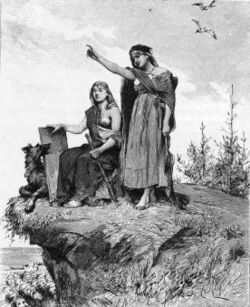 The völvas were pagan priestesses that specialized in chanting galdrs.

A galdr (plural galdrar) or gealdor (plural ġealdru) refers to a spell or incantation in Old Norse and Old English respectively; these were usually performed in combination with certain rites.[1] It was performed by both women and men.[2] Some scholars have proposed they chanted it in falsetto (gala).[2][3]

Old Norse: galdr and Old English: ġealdor or galdor are derived from the reconstructed Proto-Germanic *galdraz, meaning a song or incantation.[4][5] The terms are also related by the removal of an Indo-European -tro suffix to the verbs Old Norse: gala and Old English: galan, both derived from Proto-Germanic *galaną, meaning to sing or cast a spell.[6][7] In Old High German the -stro suffix produced galster instead.[8]

From these terms are descended words such as the Icelandic verb að gala "to sing, call out, yell", Middle English: galder "magic" and as a component of nightingale (from nihtegale), related to ġiellan, the verb ancestral to Modern English yell.[9][10] The words are also cognate with Dutch gillen "to yell, scream".

Some incantations were composed in a special meter named galdralag.[2] This meter was similar to the six-lined ljóðaháttr, also used for ritual, but added at least one more C-line.[11] Diverse runic inscriptions suggest informal impromptu methods. Another characteristic is a performed parallelism,[11] see the stanza from Skirnismál, below.

A practical galdr for women was one that made childbirth easier,[2] but they were also notably used for bringing madness onto another person, whence modern Swedish galen meaning "mad",[3] derived from the verb gala ('to sing, perform galdr').[12] Moreover, a master of the craft was also said to be able to raise storms, make distant ships sink, make swords blunt, make armour soft and decide victory or defeat in battles.[3] Examples of this can be found in Grógaldr and in Frithiof's Saga.[3] In Grógaldr, Gróa chants nine (a significant number in Norse mythology) galdrar to aid her son, and in Buslubœn, the schemes of king Ring of Östergötland are averted.[13]

It is also mentioned in several of the poems in the Poetic Edda, and for instance in Hávamál, where Odin claims to know 18 galdrar.[1] For instance, Odin mastered galdrar against fire, sword edges, arrows, fetters and storms, and he could conjure up the dead and speak to them.[14][15] There are other references in Skírnismál,[1] where Skirnir uses galdrar to force Gerðr to marry Freyr[13] as exemplified by the following stanza:

A notable reference to the use of galdrar is the eddic poem Oddrúnargrátr, where Borgny could not give birth before Oddrún had chanted "biting galdrar"[2] (but they are translated as potent charms, by Henry Adams Bellows below):

In Beowulf, gealdor is described as having been used to protect the dragon's hoard that was buried in a barrow: