According to the Greek mythology, the Korybantes (/ˌkɒrɪˈbæntiːz/; Greek: Κορύβαντες) were the armed and crested dancers who worshipped the Phrygian goddess Cybele with drumming and dancing. They are also called the Kurbantes in Phrygia. The conventional English equivalent is "Corybants". The Korybantes were the offspring of Thalia and Apollo.

The name Korybantes is of uncertain etymology. Edzard Johan Furnée and R. S. P. Beekes have suggested a Pre-Greek origin.[1][2]

The Kuretes or Kouretes (Κουρῆτες) were nine dancers who venerate Rhea, the Cretan counterpart of Cybele. A fragment from Strabo's Book VII[4] gives a sense of the roughly analogous character of these male confraternities, and the confusion rampant among those not initiated:

Many assert that the gods worshipped in Samothrace as well as the Kurbantes and the Korybantes and in like manner the Kouretes and the Idaean Daktyls are the same as the Kabeiroi, but as to the Kabeiroi they are unable to tell who they are.

A decorous Corybantian dance, as pictured in William Smith's A Dictionary of Greek and Roman Antiquities [5] (1870).

These armored male dancers kept time to a drum and the rhythmic stamping of their feet. Dance, according to Greek thought, was one of the civilizing activities, like wine-making or music. The dance in armor (the "Pyrrhic dance" or pyrrhichios [Πυρρίχη]) was a male coming-of-age initiation ritual linked to a warrior victory celebration. Both Jane Ellen Harrison and the French classicist Henri Jeanmaire[6] have shown that both the Kouretes (Κουρῆτες) and Cretan Zeus, who was called "the greatest kouros (κοῦρος)",[7] were intimately connected with the transition of boys into manhood in Cretan cities.

The English "Pyrrhic Dance" is a corruption of the original Pyrríkhē or the Pyrríkhios Khorós "Pyrrhichian Dance". It has no relationship with the king Pyrrhus of Epirus, who invaded Italy in the 3rd century BC, and who gave his name to the Pyrrhic victory, which was achieved at such cost that it was tantamount to a defeat.

The Phrygian Korybantes were often confused by Greeks with other ecstatic male confraternities, such as the Idaean Dactyls or the Cretan Kouretes, spirit-youths (kouroi) who acted as guardians of the infant Zeus. In Hesiod's telling of Zeus's birth,[8] when Great Gaia came to Crete and hid the child Zeus in a "steep cave", beneath the secret places of the earth, on Mount Aigaion with its thick forests; there the Cretan Kouretes' ritual clashing spears and shields were interpreted by Hellenes as intended to drown out the infant god's cries, and prevent his discovery by his cannibal father Cronus. Emily Vermeule observed,

This myth is Greek interpretation of mystifying Minoan ritual in an attempt to reconcile their Father Zeus with the Divine Child of Crete; the ritual itself we may never recover with clarity, but it is not impossible that a connection exists between the Kouretes' weapons at the cave and the dedicated weapons at Arkalochori".[9]

Among the offerings recovered from the cave, the most spectacular are decorated bronze shields with patterns that draw upon north Syrian originals and a bronze gong on which a god and his attendants are shown in a distinctly Near Eastern style.[10]

Korybantes also presided over the infancy of Dionysus, another god who was born as a babe, and of Zagreus, a Cretan child of Zeus, or child-doublet of Zeus. The wild ecstasy of their cult can be compared to the female Maenads who followed Dionysus.

Ovid, in Metamorphoses, says the Kouretes were born from rainwater (Uranus fertilizing Gaia). This suggests a connexion with the Pelasgian Hyades. 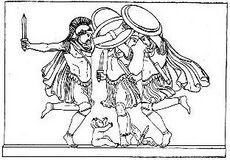 The Kouretes dancing around the infant Zeus, as pictured in Themis by Jane Ellen Harrison (1912, p. 23; see References section below).

The scholar Jane Ellen Harrison writes that besides being guardians, nurturers, and initiators of the infant Zeus, the Kouretes were primitive magicians and seers. She also writes that they were metal workers and that metallurgy was considered an almost magical art.[11] There were several "tribes" of Korybantes, including the Cabeiri, the Korybantes Euboioi, the Korybantes Samothrakioi. Hoplodamos and his Gigantes were counted among Korybantes, and Titan Anytos was considered a Kourete.

Homer referred to select young men as kouretes, when Agamemnon instructs Odysseus to pick out kouretes, the bravest among the Achaeans to bear gifts to Achilles.[12] The Greeks preserved a tradition down to Strabo's day, that the Kuretes of Aetolia and Acarnania in mainland Greece had been imported from Crete.[13]