The Melania Trump replacement theory is a conspiracy theory that First Lady of the United States Melania Trump has been replaced by a body double,[1][2][3] and that the "real" Melania is either dead or gone from public life. Supporters of the theory allege physical differences in facial features, bodily dimensions, or behavior between the original and replacement Melania, and changes in President Donald Trump's language in referring to Melania.

Mainstream media sources have labelled the theory false, calling it for example "a ridiculous conspiracy theory"[4] and "a non-story."[1] Website Vox described the theory as conforming with a narrative outsiders have created about Melania, which "paints Melania as either unwilling to be part of the administration or as someone who hates her husband so much that she’s found a body double to stand in".[13] 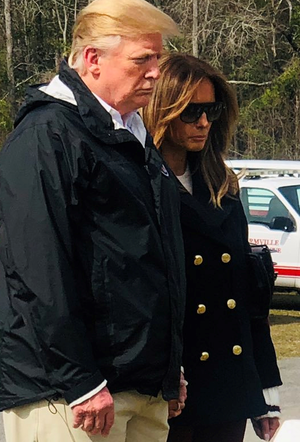 Donald and Melania Trump in Alabama, March 2018. Some believe the woman pictured here was not the real Melania.

In October 2017, The Guardian columnist Marina Hyde claimed to have inadvertently launched the theory by tweeting on 13 October, "Absolutely convinced Melania is being played by a Melania impersonator these days. Theory: she left him weeks ago".[7] Another source wrote that the theory had already been circulating for months by then.[4] An October 13 Facebook post of the theory by an actress named Andrea Wagner Barton quickly gained nearly a hundred thousand shares.[4] Others noted an image where Melania was accompanied by another woman, appearing to be a Secret Service agent, with a very similar appearance.[4] Some found it suspicious that Trump referred aloud to "my wife, Melania, who happens to be right here."[2][4][5][6]

On May 14, 2018, Melania reportedly underwent an embolization, which is a minimally invasive procedure that deliberately blocks a blood vessel[14] in order to treat a benign kidney condition. The procedure was reportedly successful and without complications.[15] During this period she was not seen in public for five weeks, while the White House refused for most of that period to comment on her absence at all, spurring further theories.[16] In one instance, when asked about Melania, Trump told pool reporters that she was watching them from a window, pointing to the window, which was clearly empty.[9] Following Melania's reported return to the White House following surgery, Trump tweeted a welcome which misspelled her name as "Melanie".[17][18] An alternative theory proposed after the surgery episode was that Melania had had plastic surgery, possibly a facelift or breast enlargement, resulting in different appearance.[19] The body double theory arose again in July 2018, from images of Melania exiting Air Force One in Brussels.[20]

The theory was raised again in 2019 following a Trump visit to an Alabama tornado site. The TV show The View had a segment on "a surge of internet chatter about the former fashion model’s Alabama appearance under the #fakeMelania hashtag."[10]

After the Alabama trip, Donald Trump tweeted "the Fake News photoshopped pictures of Melania, then propelled conspiracy theories that it’s actually not her by my side in Alabama and other places."[10][21] Trump gave no evidence of any photoshopped pictures.[21] Melania's spokeswoman called the segment on The View "shameful"[22] and "beyond petty".[23]

One scholar, University of Pennsylvania history professor Sophia Rosenfeld, noted that this conspiracy theory follows a long line of such claims of noted figures: "Pornographic libelles featuring a sex-obsessed Marie-Antoinette in the years before the French Revolution are simply the ancestors of today's 'news stories' claiming Michelle Obama or Melania Trump is actually a man, or a body double, or a lesbian, or anything else salacious."[24]

Late night talk show host Stephen Colbert has poked fun at the theory by having actress Laura Benanti appear on his show as a Melania impersonator.[25]