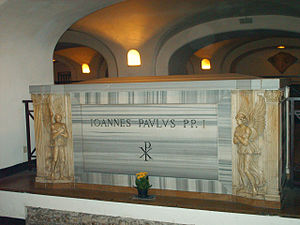 Tomb of John Paul I in the Vatican Grottoes

Pope John Paul I died suddenly in September 1978, 33 days after his election. Following contradictory reports about the circumstances of his death and apparent anomalies about the issuing of the death certificate and other procedures, several conspiracy theories have gained currency.

Many of these concern the serious corruption in the Vatican Bank (Istituto per le Opere Religiose), possibly linked to Freemasonry, which is forbidden by church law. None of the claims has been substantiated.

Discrepancies in the Vatican's account of the events surrounding John Paul I's death – its inaccurate statements about who found the body;[1] what he had been reading; when, where, and whether an autopsy could be carried out[1][2] – produced a number of conspiracy theories, many associated with the Vatican Bank, which owned many shares in Banco Ambrosiano.

Some conspiracy theorists connect the death of John Paul in September 1978 with the image of the "bishop dressed in white" said to have been seen by Lucia Santos and her cousins Jacinta and Francisco Marto during the visitations of Our Lady of Fátima in 1917.[3][4] In a letter to a colleague, John Paul had said he was deeply moved by having met Lucia and vowed to perform the Consecration of Russia in accordance with her vision.[5]

David Yallop's 1984 book In God's Name proposed the theory that the pope had been in "potential danger" because of corruption in the Vatican Bank (known officially as the Institute for Works of Religion or Istituto per le Opere di Religione), the Vatican's most powerful financial institution[6] which owned many shares in Banco Ambrosiano. The Vatican Bank lost about a quarter of a billion dollars.[7]

This corruption was real[8] and is known to have involved the bank's head, Bishop Paul Marcinkus, along with Roberto Calvi of the Banco Ambrosiano. Marcinkus, at the time head of the Vatican Bank, was indicted in Italy in 1982 as an accessory in the $3.5 billion collapse of Banco Ambrosiano.[9] Calvi was a member of P2, an illegal Italian Masonic lodge.[10] He was found dead in London in 1982, after disappearing just before the corruption became public. His death was initially ruled suicide and a second inquest – ordered by his family – then returned an open verdict.[11]

Upon publication of his book, Yallop agreed to donate every penny he made from sales to a charity of the Vatican's choice if they agreed to investigate his central claim, that when the body of the pope was discovered, his contorted hand gripped a piece of paper that was later destroyed because it named high-ranking members of the curia who were Freemasons and others who had a role in numerous corruption scandals and the laundering of mafia drug money. One of the names believed to be on the paper was that of Bishop Paul Marcinkus, who was later promoted by Pope John Paul II to Pro-President of Vatican City, making him the third most powerful person in the Vatican, after the pope and the secretary of state. None of Yallop's claims, which are unproven, has thus far been acknowledged by the Vatican, although Yallop disclosed the amount of Masonic Lodge members from the Curia, whom he alleged to be Freemasons, within the pages of his book.[12] There is a papal ban of Freemasonry, and it is forbidden by Church law for a Roman Catholic to be a Freemason.

Yallop specifically summarized his conspiracy theory in his book: Three archbishops—Marcinkus, Villot and Cody—conspired with three Mafia types—Calvi, Sindona and Gelli—in the murder of John Paul I. “It was clear that these six men—Marcinkus, Villot, Cody, Calvi, Sidona and Gelli—had a great deal to fear if the papacy of John Paul I should continue… all of them stood to gain in a variety of ways if John Paul I should suddenly die.”[13]

In his book A Thief in the Night, British historian and journalist John Cornwell examines and challenges Yallop’s points of suspicion. Yallop’s murder theory requires that the pope’s body be found at 4:30 or 4:45 a.m., one hour earlier than official reports estimated.[14] He bases this, inter alia, on an early story by Vatican Radio and the Italian news service ANSA that garbled the time and misrepresented the layout of the papal apartments. Yallop says he had testimony from Sister Vincenza Taffarel (the nun who found the pope's body) to this effect but refused to show Cornwell his transcripts.[15]

Theologian Abbé Georges de Nantes (fr) spent much of his life building a case for murder against the Vatican, collecting statements from people who knew the pope before and after his election. His writings go into detail about the banks and about John Paul I's supposed discovery of a number of Freemason priests in the Vatican, along with a number of his proposed reforms and devotion to Our Lady of Fátima.[12][16]

Gregoire builds on his forerunners, benefiting by events not available to the others when they wrote their books. “I owe a great debt of gratitude to my predecessors…had Yallop not laid out the blueprint, had Cornwell not told the truth, had Manhattan not struck on the plot; I could have never written my book.”[17]

Avro Manhattan linked the CIA to the murder of John Paul I. “The CIA resolved to destroy John Paul I before he would destroy a Vatican subservient to the will of the USA.”[18]

In September 1978, with the growing likelihood that U.S President Jimmy Carter would cut off funds to strongman Anastasio Somoza, the CIA feared if Nicaragua fell to the Marxist Sandinistas, the USA would soon be looking at a half-dozen mini-Cubas in Central America.[19]

What Gregoire brings to the table is the complete record of the courts that tried the bank scandal—from the first transaction that took place on October 22, 1978 six days after John Paul II took office which investor was first contacted on September 15, 1978 midway thru the papacy of John Paul I,[21] to the last transaction in 1981 when Banco Ambrosiano was caught funneling hundreds of millions of dollars through the Vatican Bank to Nicaragua and Panama to the benefit of Somoza and the Contras and to a lesser extent Solidarity.[22]

According to the Catholic Traditionalist Movement, their founder Fr. Gommar DePauw was to have gone to Rome to help John Paul I reestablish the Tridentine Mass.[25]

[Fr. DePauw] stated on the 15th anniversary of the pope’s death: “Well, I tell you one thing, if he had remained Pope, you wouldn’t have me here at the Chapel because with that beautiful official letter signed by the Secretary of State, also came an unofficial message that I better start packing my suitcase, that there was a job waiting for me in Rome, in the Vatican, to help Pope John Paul I bring the Truth back to the Church. Well, it wasn’t to be and the Lord, Who knows what He does, obviously wanted me to be in this Chapel. … What was I going to do in Rome? Well let’s just forget it.”

Other prominent Traditionalist Catholic websites, not related to CTM, have suggested John Paul I may have been assassinated to prevent restoration of the Tridentine Mass.[26][27]

In his 2017 book The Godmother: Madre Pascalina,[28] Fr. Charles Murr writes about the coincidence that Pope John Paul I had attempted to discipline Cardinal Sebastiano Baggio, who appointed many "liberal" bishops including, later, the sex abuser Theodore McCarrick, and that Cdl. Baggio was the last person to have seen Pope John Paul I alive.[29]

In his book published in 2019, Anthony Raimondi, a nephew of Lucky Luciano, says he helped his cousin Archbishop Paul Marcinkus kill the pope by force-feeding the latter with valium. The reason given was that John Paul had allegedly threatened to expose "a massive stock fraud run by Vatican insiders". Raimondi says that plans were made to also assassinate John Paul II had the latter decided to expose the fraud. Raimondi says that "If they take [the pope’s body] and do any type of testing, they will still find traces of the poison in his system."[30]

Malachi Martin's 1986 book Vatican: A Novel[31] is a novel based on recent papal history. Although officially a work of fiction, Martin proposes the theory that the pope was murdered by the Soviet Union because he would abdicate the benign policy of his two predecessors, John XXIII and Paul VI, towards accommodating communism, and once again condemn it as an atheistic totalitarian ideology. Martin believed that the church structure was infiltrated for decades by illuminati agents who reached positions of high influence and rank, such as Jean-Marie Villot, at that time Cardinal Secretary of State.[32]

In December 1986, a play by Mark E. Smith of British post-punk band The Fall, Hey! Luciani: The Life and Codex of John Paul I, was staged for two weeks in London, starring performance artist Leigh Bowery. It drew on conspiracy theories about the pope's death. A single, "Hey! Luciani", reached number 59 on the UK singles chart.[33][34]

The 1990 motion picture The Godfather Part III featured a story element depicting Società Generale Immobiliare, the largest real estate company in the world (whose former largest shareholder was the Holy See and the Vatican Bank) involved in organised crime during and after the death of the old pope, and the election of a fictional cardinal named Lamberto to the papacy. Lamberto, an ally to central character Michael Corleone, takes the papal name "John Paul I" and, like the real Pope John Paul I, he mysteriously dies in his bed after a brief papal tenure. However, unlike the actual pope, who was thin and slight in appearance, this version of John Paul I was dark-haired, stocky and muscular.[35]

In the 2002 novel The Company: A Novel of the CIA by Robert Littell, Pope John Paul I is murdered by a KGB hired killer.[36]

The Last Confession is a play written in 2007 by Roger Crane. It is a thriller that tracks the dramatic tensions, crises of faith, and political manoeuvrings inside the Vatican surrounding the death of Pope John Paul I.[37] The play toured the UK in the spring of 2007, before being transferred to the Theatre Royal, Haymarket, with a cast including David Suchet. It was subsequently broadcast on BBC Radio 4 on 4 October 2008. In October 2010 the play was brought to continental Europe by the Antwerp Theater Group "De Speling". Suchet reprised the role at the Ahmanson Theater in Los Angeles in July 2014 and the Comedy Theatre in Melbourne in September 2014.