Chicago
Location in the United States

Lua error in Module:Location_map at line 501: Unable to find the specified location map definition: "Module:Location map/data/USA Illinois" does not exist. United Airlines Flight 553 was a scheduled flight from Washington National Airport to Omaha, Nebraska, via Chicago Midway International Airport. On December 8, 1972, the Boeing 737-222 serving the flight, City of Lincoln, registration Template:Airreg[1]:2 crashed during an aborted landing and go around while approaching Chicago Midway International Airport.[1]:1[2][3]

The plane crashed into a residential neighborhood, destroying five houses; there was an intense ground fire. 43 of the 61 aboard the aircraft and two on the ground were killed.[4][5] Among the passengers killed were Illinois congressman George W. Collins and Dorothy Hunt, the wife of Watergate conspirator E. Howard Hunt.[6] This crash was the first fatal accident involving a Boeing 737, which had entered airline service nearly five years earlier in February 1968.[7]

United Airlines Flight 553 was a scheduled service from Washington National Airport to Omaha, Nebraska, via Chicago Midway International Airport. The aircraft used for the flight was a four-year-old Boeing 737-222 City of Lincoln, registration Template:Airreg[1]:2 (built in 1968).

The accident occurred as the aircraft was on a northwesterly heading to land on runway 31L at Midway Airport.[1]:2 The area was overcast at the time: a pilot landing on that runway immediately after the accident later reported that the airport was only visible below 500–600 feet (150–180 m) AGL.[1]:7 Flight 553 was on instruments, cleared by air traffic control at 14:24 CST for a nonprecision approach.[1]:1

The localizer approach for runway 31L used an Outer Marker Beacon (OMB) named "Kedzie", located 3.3 nmi (6.1 km; 3.8 mi) prior to the runway threshold. Under the published landing procedures, the aircraft was to maintain a minimum altitude of 1,500 feet (460 m) until it passed the OMB, at which point the flight was allowed to descend to a minimum descent altitude (MDA) of 1,040 feet (320 m).[1]:7 Published procedures, and pilots operating under instrument flight rules, use mean sea level (MSL) as the point of reference for measuring altitude; at Midway Airport, an altitude of 1,040 feet (320 m) MSL corresponded to an actual height above ground level (AGL) of only 429 feet (131 m).[1]:7

When Flight 553 reached the Kedzie OMB, the aircraft was still at an altitude of 2,200 feet (670 m) MSL, a full 700 feet (210 m) above the minimum crossing altitude of 1,500 feet (460 m) MSL,[1]:26 1,160 feet (350 m) above the height at which the decision on whether to land must be finalized. Realizing the aircraft was too high, the captain extended the spoilers (speed brakes) and steepened the aircraft's descent rate to 1,550 feet (470 m) per minute[1]:26 (in comparison with the 1,000 feet (300 m) per minute approximate rate specified[1]:57 by United Airlines for the final segment of a nonprecision approach;[1]:26–27 typical precision approach descent rates are 600–700 feet (180–210 m) per minute). The aircraft continued to descend at a rate of 1,500 feet (460 m) per minute, emerging from cloud 500 feet (150 m) above the ground,[1]:28 until it reached its level-off altitude at MDA.[1]:26–27 The captain leveled the plane off and increased engine power, but did not advance the throttles fully. With the spoilers still extended, thrust was not enough to maintain level flight without losing speed.[1]:29 The stick shaker, a stall warning device attached to the pilots' control yoke, activated 6–7 seconds after the aircraft leveled off and continued to sound as the aircraft entered an aerodynamic stall.[1]:28

The three-man flight crew died, along with 40 of the 55 passengers.[1]:4 The crash destroyed five houses and damaged three others,[1]:5 killing two people on the ground.[1]:4 Survivors credited the heroic actions of stewardesses who called out to survivors to exit through a hole in the rear of the plane.[10] 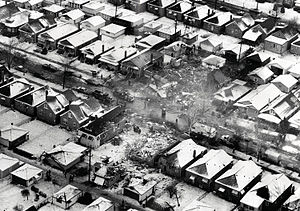 A photo of the crash site,
taken by NTSB investigators

The National Transportation Safety Board (NTSB) was notified of the accident at 14:40 CST and immediately dispatched an investigation team to the scene.[1]:35 Agents of the Federal Bureau of Investigation (FBI) were on the scene about 45 minutes after the crash, before any investigators from the NTSB.[lower-alpha 1][lower-alpha 2]

The Flight Data Recorder (FDR) on board the aircraft was not functioning at the time of the crash due to a mechanical failure.[1]:8 Fortunately, the ARTS-III (Automated Terminal Radar Services) system at nearby O'Hare International Airport was in operation at the time of the accident, and saved recorded transponder data on magnetic tape.[1]:14–15 The tapes were analyzed extensively and compared to Boeing flight profile data to develop the course, speed, rate of descent, and altitudes of the plane as it made its approach to Chicago Midway.[1]:15 The system had tracked the plane from a position of 55 miles (89 km) east of its antenna site to close to the crash site.[1]:15

The Cockpit Voice Recorder (CVR) was working normally and the tape in that "black box" was relatively undamaged,[1]:8 which enabled the NTSB to sequence it in time with the readings of ARTS-III.[1]:18 The NTSB then was able to determine the power output of the engines, at any given point in time, with CVR tape sound analysis. That correlation, CVR with ARTS-III, allowed the NTSB to reconstruct the flight's performance, and to determine that the stick shaker first sounded 6 to 7 seconds after the plane leveled off at 1,000 ft (300 m) MSL (380 ft (120 m) AGL) and continued until ground impact.

No evidence was found of sabotage or foul play.[1]:32 The NTSB Report described nonsurvivors’ injuries in unusual detail, finding this “necessary” because of the allegations “injected into the publicity surrounding” the accident.[1]:13 The Board’s official finding of the probable cause of the accident was the captain’s failure to exercise positive flight management.[1]:32 The Analysis section of the Report concludes with a paragraph to “emphasise”[1]:31 that the accident sequence resulted from that failure, and “reiterate[d][1]:33 its often-expressed concern about the apparent lack of crew coordination and cockpit discipline during nonprecision approaches”. It went on to make comparison with the then-recent Eastern Airlines hard landing at Fort Lauderdale[12] and Southern Airways accident at Huntington Tri-State, and refers[1]:33 the reader to the Report on the Southern Airways accident[13] which quotes in full an FAA Bulletin raising issues of training and culture.

The CVR showed cockpit discussion of the FDR fault[1]:25, 55-7 and it has since been reported[14] as fact that the crew had become distracted by it.

The NTSB sought to understand how the rapid descent had been accomplished. From performance studies and simulator tests it was clear that the aircraft was in a high-drag configuration,[1]:18 rather than any of the approach configurations specified[1]:57 by the airline, and the Board concluded that Flight 553 had landing gear down, flaps at 30 degrees and spoilers extended to the flight detent position.[1]:27 The status indicator for the spoilers would then be showing green: the same indication as for spoilers retracted but ready to deploy automatically immediately on landing, potentially misleading the First Officer when executing the final-descent checklist urgently.[1]:27 It was thus likely that when the Captain attempted to level off he failed to immediately retract the spoilers.[1]:28 The aircraft lost speed, and a stall began to develop.

Coincidentally,[1]:25 the Air Traffic Controller decided that the separation between Flight 553 and the slower aircraft ahead of it on the approach to the runway was no longer sufficient and instructed Flight 553 to go around for a missed approach. This instruction was received on 553’s radio as the aircraft’s stall warning began.

The final mistake was inappropriate retraction of the flaps, from 30 degrees to 15 degrees, while the plane's airspeed was still too low and the spoilers were still extended. Flaps-15 was the correct configuration for the go-around, but not with spoilers deployed;[1]:57 and flap retraction is inappropriate with the stick shaker active because flap retraction increases the minimum speed for flight.

Dorothy Hunt's death led to the accident becoming caught up in rumors and conspiracy theories related to the unfolding Watergate scandal.[14] Hunt was carrying $10,000 in $100 bills when the plane crashed, and some alleged that this money was meant for people connected to Watergate.[6][14] James McCord alleged that Hunt supplied the Watergate defendants with money for legal expenses.[6] The FBI's appearance at the crash scene was also regarded by some as unusually fast.[11][14] Skeptics of the official narrative speculated that the plane was targeted due to Hunt's presence on board, and that sabotage of the flight was covered up by government agencies. As a result, the accident became known as "the Watergate crash."[11][14]

Proponents of Watergate-related theories included Sherman Skolnick, a Chicago-based private investigator, who alleged that the aircraft had been sabotaged by the CIA.[lower-alpha 3] On June 13, 1973, Skolnick testified at an NTSB hearing in Rosemont, Illinois and claimed the Federal Bureau of Investigation, Columbia Broadcasting System, United Airlines, traffic controllers at Midway, and the NTSB itself conspired in a plot to sabotage the flight because 12 of its passengers had links to Watergate.[15][lower-alpha 4] United Airlines officials had asked the NTSB to hear Skolnick's version because he had frequently charged that UAL was among those attempting to suppress his explanation of events.[15] He said that Hunt carried $2 million in traveler's checks and money orders stolen from the Committee for the Re-Election of the President, $50,000 in currency, and documents that may have led to the impeachment of President Richard Nixon.[15] He stated a hitman — that Nixon had placed aboard the aircraft to make sure that Hunt was killed — also died in the crash.[15] The Chicago Tribune said that Skolnick "[knitted] scores of facts and assumptions together loosely" and "[no] documentation was produced to substantiate the charges".[15]

The claim of CIA responsibility was echoed by Nixon's special counsel Chuck Colson in an interview with Time (magazine) magazine in 1974.[16] However, the same article speculated that Colson was accusing the CIA of the broad Watergate conspiracy in a desperate attempt to stave off Nixon's impeachment in the scandal, and that Colson may have "lost touch with reality" as he faced a prison sentence.[16]

Note that tailstrike.com‘s accident summary is from this
Wikipedia article, as in December 2007, lightly copy-edited.