A video game genre is a classification assigned to a video game based primarily on its gameplay (type of interaction) rather than visual or narrative features.[1][2] A video game genre is normally defined by a set of gameplay challenges considered independently of setting or game-world content, unlike works of fiction that are expressed through other media, such as films or books. For example, a shooter game is still a shooter game, regardless of where or when it takes place.[3][4]

As with nearly all varieties of genre classification, the matter of a specific game's genre is open to subjective interpretation. An individual game may belong to several genres at once.[1]

In Tom Hirschfeld's 1981 book How to Master the Video Games, he divides the included games into broad categories in the table of contents: Space Invaders-type, Asteroids-type, maze, reflex, and miscellaneous.[5] The first two of these correspond to the still-used genres of fixed shooter and multidirectional shooter. Maze is also a modern genre.

Chris Crawford attempted to classify video games in his 1984 book The Art of Computer Game Design. In this book, Crawford primarily focused on the player's experience and activities required for gameplay.[6] Here, he stated that "the state of computer game design is changing quickly. We would therefore expect the taxonomy presented [in this book] to become obsolete or inadequate in a short time."[7] Since then, among other genres, the platformer and 3D shooter genres, which hardly existed at the time, have gained in popularity. As hardware capabilities have increased, new genres have become possible, with examples being increased memory, the move from 2D to 3D, new peripherals, online functionalities, and location-based mechanics.

The video game industry expanded in the 1990s and both smaller and independent publishers had little chance of surviving. Because of this, game developers settled more into set genres that larger publishers and retailers could use for marketing.[2] 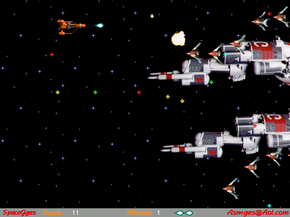 This space-themed video game is a shoot 'em up, or a horizontally scrolling shooter.

Due to "direct and active participation" of the player, video game genres differ from literary and film genres. Though one could state that Space Invaders is a science fiction video game, author Mark J.P. Wolf wrote that such a classification "ignores the fundamental differences and similarities which are to be found in the player's experience of the game."[6] In contrast to the visual aesthetics of games, which can vary greatly, it is argued that it is interactivity characteristics that are common to all games.[1]

Like film genres, the names of video game genres have come about generally as a common understanding between the audience and the producers.[6] Descriptive names of genres take into account the goals of the game, the protagonist and even the perspective offered to the player. For example, a first-person shooter is a game that is played from a first-person perspective and involves the practice of shooting.[8] Whereas "shooter game" is a genre name, "first-person shooter" and "third-person shooter" are common subgenres of the shooter genre.[9] Other examples of such prefixes are real-time, turn based, top-down and side-scrolling. Genre names are not fixed and may change over time because of the nature of audience-producer agreement on genre naming. One of the best known examples of such changes is with the waning of "Doom clones", initially used for games like 1993's Doom, into "first-person shooters" over the next several years with the latter becoming most predominate for the genre by around 2000.[10]

The target audience, underlying theme or purpose of a game are sometimes used as a genre identifier, such as with "Christian game" and "serious game" respectively. However, because these terms do not indicate anything about the gameplay of a video game, these are not considered genres.[2]

Video game genres vary in specificity, with popular video game reviews using genre names varying from "action" to "baseball". In this practice, basic themes and more fundamental characteristics are used alongside each other.[11]

Elements of the role-playing genre, which focuses on storytelling and character growth, have been implemented in many different genres of video games. This is because the addition of a story and character enhancement to an action, strategy or puzzle video game does not take away from its core gameplay, but adds an incentive other than survival to the experience.[13]

In addition to gameplay elements, some games may be categorized by other schemes, those these are typically not used as genres:[1]

According to some analysts, the percentage of each broad genre in the best-selling physical games worldwide is broken down as follows.[14][15]

The most popular genres are shooter, action, role-playing and sports, with platformer and racing having both declined in the last decade. Puzzle games have declined when measured by sales, however, on mobile, where the majority of games are free-to-play, this genre remains the most popular worldwide.[16][17][18]