AArch64 or ARM64 is the 64-bit extension of the ARM architecture family. 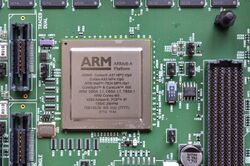 It was first introduced with the Armv8-A architecture. Arm releases a new extension every year.[1]

Announced in October 2011,[2] ARMv8-A represents a fundamental change to the ARM architecture. It adds an optional 64-bit architecture, named "AArch64", and the associated new "A64" instruction set. AArch64 provides user-space compatibility with the existing 32-bit architecture ("AArch32" / ARMv7-A), and instruction set ("A32"). The 16-32bit Thumb instruction set is referred to as "T32" and has no 64-bit counterpart. ARMv8-A allows 32-bit applications to be executed in a 64-bit OS, and a 32-bit OS to be under the control of a 64-bit hypervisor.[3] ARM announced their Cortex-A53 and Cortex-A57 cores on 30 October 2012.[4] Apple was the first to release an ARMv8-A compatible core (Cyclone) in a consumer product (iPhone 5S). AppliedMicro, using an FPGA, was the first to demo ARMv8-A.[5] The first ARMv8-A SoC from Samsung is the Exynos 5433 used in the Galaxy Note 4, which features two clusters of four Cortex-A57 and Cortex-A53 cores in a big.LITTLE configuration; but it will run only in AArch32 mode.[6]

The main opcode for selecting which group an A64 instruction belongs to is at bits 25-28.

In December 2014, ARMv8.1-A,[9] an update with "incremental benefits over v8.0", was announced. The enhancements fell into two categories: changes to the instruction set, and changes to the exception model and memory translation.

Enhancements for the exception model and memory translation system included the following:

In January 2016, ARMv8.2-A was announced.[11] Its enhancements fell into four categories:

The Scalable Vector Extension (SVE) is "an optional extension to the ARMv8.2-A architecture and newer" developed specifically for vectorization of high-performance computing scientific workloads.[12][13] The specification allows for variable vector lengths to be implemented from 128 to 2048 bits. The extension is complementary to, and does not replace, the NEON extensions.

A 512-bit SVE variant has already been implemented on the Fugaku supercomputer using the Fujitsu A64FX ARM processor. It aims to be the world's highest-performing supercomputer with "the goal of beginning full operations around 2021."[14]

In October 2016, ARMv8.3-A was announced. Its enhancements fell into six categories:[16]

ARMv8.3-A architecture is now supported by (at least) the GCC 7 compiler.[20]

In September 2019, ARMv8.6-A was announced. Its enhancements fell into these categories:[37]

For example, fine-grained traps, Wait-for-Event (WFE) instructions, EnhancedPAC2 and FPAC. The Bfloat16 extensions for SVE and Neon are mainly for deep learning use.[39]

In September 2020, ARMv8.7-A was announced. Its enhancements fell into these categories:[40]

In September 2021, ARMv8.7-A and ARMv9.3-A was announced. Their enhancements fell into these categories:[41]

Optional AArch64 support was added to the Armv8-R profile, with the first Arm core implementing it being the Cortex-R82.[42] It adds the A64 instruction set, with some changes to the memory barrier instructions.[43]