A (finite) drunkard's walk is an example of an absorbing Markov chain.[1]

Like general Markov chains, there can be continuous-time absorbing Markov chains with an infinite state space. However, this article concentrates on the discrete-time discrete-state-space case.

A Markov chain is an absorbing chain if[1][2]

In an absorbing Markov chain, a state that is not absorbing is called transient.

A basic property about an absorbing Markov chain is the expected number of visits to a transient state j starting from a transient state i (before being absorbed). The probability of transitioning from i to j in exactly k steps is the (i,j)-entry of Qk. Summing this for all k (from 0 to ∞) yields the fundamental matrix, denoted by N. It can be proven that

where It is the t-by-t identity matrix. The (i, j) entry of matrix N is the expected number of times the chain is in state j, given that the chain started in state i. With the matrix N in hand, other properties of the Markov chain are easy to obtain.[2]

This fundamental matrix can be thought of as a matrix equivalent of the following geometric series:

Variance on number of visits

where Ndg is the diagonal matrix with the same diagonal as N and Nsq is the Hadamard product of N with itself (i.e. each entry of N is squared).

where 1 is a length-t column vector whose entries are all 1.

Variance on number of steps

where tsq is the Hadamard product of t with itself (i.e. each entry of t is squared).

where Ndg is the diagonal matrix with the same diagonal as N.

Another property is the probability of being absorbed in the absorbing state j when starting from transient state i, which is the (i,j)-entry of the matrix

Alternatively, this probability can also be directly obtained from the (i,j)-entry of [math]\displaystyle{ P^n }[/math] for a large enough value of n. That is:

Consider the process of repeatedly flipping a fair coin until the sequence (heads, tails, heads) appears. This process is modeled by an absorbing Markov chain with transition matrix

For this absorbing Markov chain, the fundamental matrix is

Therefore, the expected number of coin flips before observing the sequence (heads, tails, heads) is 10, the entry for the state representing the empty string. 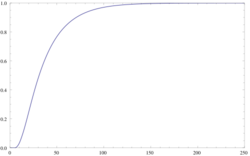 Games based entirely on chance can be modeled by an absorbing Markov chain. A classic example of this is the ancient Indian board game Snakes and Ladders. The graph on the left[3] plots the probability mass in the lone absorbing state that represents the final square as the transition matrix is raised to larger and larger powers. To determine the expected number of turns to complete the game, compute the vector t as described above and examine tstart, which is approximately 39.2.

The example of infectious disease testing, in either blood products or in medical clinics, is often taught as an example of an absorbing Markov chain.[4] The public U.S. Centers for Disease Control and Prevention (CDC) model for HIV and for hepatitis B, for example,[5] illustrates the property that absorbing Markov chains can lead to the detection of disease, versus the loss of detection through other means.

In the standard CDC model, the Markov chain has five states, a state in which the individual is uninfected, then a state with infected but undetectable virus, a state with detectable virus, and absorbing states of having quit/been lost from the clinic, or of having been detected (the goal). The typical rates of transition between the Markov states are the probability p per unit time of being infected with the virus, w for the rate of window period removal (time until virus is detectable), q for quit/loss rate from the system, and d for detection, assuming a typical rate [math]\displaystyle{ \lambda }[/math] at which the health system administers tests of the blood product or patients in question. 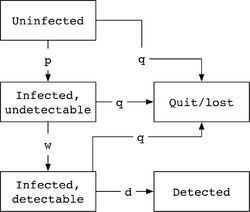 It follows that we can "walk along" the Markov model to identify the overall probability of detection for a person starting as undetected, by multiplying the probabilities of transition to each next state of the model as: