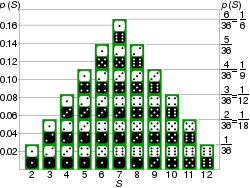 These concepts have been given an axiomatic mathematical formalization in probability theory, which is used widely in areas of study such as statistics, mathematics, science, finance, gambling, artificial intelligence, machine learning, computer science, game theory, and philosophy to, for example, draw inferences about the expected frequency of events. Probability theory is also used to describe the underlying mechanics and regularities of complex systems.[3]

When dealing with experiments that are random and well-defined in a purely theoretical setting (like tossing a coin), probabilities can be numerically described by the number of desired outcomes, divided by the total number of all outcomes. For example, tossing a coin twice will yield "head-head", "head-tail", "tail-head", and "tail-tail" outcomes. The probability of getting an outcome of "head-head" is 1 out of 4 outcomes, or, in numerical terms, 1/4, 0.25 or 25%. However, when it comes to practical application, there are two major competing categories of probability interpretations, whose adherents hold different views about the fundamental nature of probability:

The word probability derives from the Latin probabilitas, which can also mean "probity", a measure of the authority of a witness in a legal case in Europe, and often correlated with the witness's nobility. In a sense, this differs much from the modern meaning of probability, which in contrast is a measure of the weight of empirical evidence, and is arrived at from inductive reasoning and statistical inference.[10]

According to Richard Jeffrey, "Before the middle of the seventeenth century, the term 'probable' (Latin probabilis) meant approvable, and was applied in that sense, univocally, to opinion and to action. A probable action or opinion was one such as sensible people would undertake or hold, in the circumstances."[12] However, in legal contexts especially, 'probable' could also apply to propositions for which there was good evidence.[13]

The sixteenth-century Italian polymath Gerolamo Cardano demonstrated the efficacy of defining odds as the ratio of favourable to unfavourable outcomes (which implies that the probability of an event is given by the ratio of favourable outcomes to the total number of possible outcomes[14]). Aside from the elementary work by Cardano, the doctrine of probabilities dates to the correspondence of Pierre de Fermat and Blaise Pascal (1654). Christiaan Huygens (1657) gave the earliest known scientific treatment of the subject.[15] Jakob Bernoulli's Ars Conjectandi (posthumous, 1713) and Abraham de Moivre's Doctrine of Chances (1718) treated the subject as a branch of mathematics.[16] See Ian Hacking's The Emergence of Probability[10] and James Franklin's The Science of Conjecture[17] for histories of the early development of the very concept of mathematical probability.

The theory of errors may be traced back to Roger Cotes's Opera Miscellanea (posthumous, 1722), but a memoir prepared by Thomas Simpson in 1755 (printed 1756) first applied the theory to the discussion of errors of observation.[18] The reprint (1757) of this memoir lays down the axioms that positive and negative errors are equally probable, and that certain assignable limits define the range of all errors. Simpson also discusses continuous errors and describes a probability curve.

The first two laws of error that were proposed both originated with Pierre-Simon Laplace. The first law was published in 1774, and stated that the frequency of an error could be expressed as an exponential function of the numerical magnitude of the error—disregarding sign. The second law of error was proposed in 1778 by Laplace, and stated that the frequency of the error is an exponential function of the square of the error.[19] The second law of error is called the normal distribution or the Gauss law. "It is difficult historically to attribute that law to Gauss, who in spite of his well-known precocity had probably not made this discovery before he was two years old."[19]

Daniel Bernoulli (1778) introduced the principle of the maximum product of the probabilities of a system of concurrent errors.

Adrien-Marie Legendre (1805) developed the method of least squares, and introduced it in his Nouvelles méthodes pour la détermination des orbites des comètes (New Methods for Determining the Orbits of Comets).[20] In ignorance of Legendre's contribution, an Irish-American writer, Robert Adrain, editor of "The Analyst" (1808), first deduced the law of facility of error,

In 1906, Andrey Markov introduced[21] the notion of Markov chains, which played an important role in stochastic processes theory and its applications. The modern theory of probability based on the measure theory was developed by Andrey Kolmogorov in 1931.[22]

On the geometric side, contributors to The Educational Times were influential (Miller, Crofton, McColl, Wolstenholme, Watson, and Artemas Martin).[23] See integral geometry for more info.

Like other theories, the theory of probability is a representation of its concepts in formal terms—that is, in terms that can be considered separately from their meaning. These formal terms are manipulated by the rules of mathematics and logic, and any results are interpreted or translated back into the problem domain.

There have been at least two successful attempts to formalize probability, namely the Kolmogorov formulation and the Cox formulation. In Kolmogorov's formulation (see also probability space), sets are interpreted as events and probability as a measure on a class of sets. In Cox's theorem, probability is taken as a primitive (i.e., not further analyzed), and the emphasis is on constructing a consistent assignment of probability values to propositions. In both cases, the laws of probability are the same, except for technical details.

There are other methods for quantifying uncertainty, such as the Dempster–Shafer theory or possibility theory, but those are essentially different and not compatible with the usually-understood laws of probability.

An example of the use of probability theory in equity trading is the effect of the perceived probability of any widespread Middle East conflict on oil prices, which have ripple effects in the economy as a whole. An assessment by a commodity trader that a war is more likely can send that commodity's prices up or down, and signals other traders of that opinion. Accordingly, the probabilities are neither assessed independently nor necessarily rationally. The theory of behavioral finance emerged to describe the effect of such groupthink on pricing, on policy, and on peace and conflict.[24]

In addition to financial assessment, probability can be used to analyze trends in biology (e.g., disease spread) as well as ecology (e.g., biological Punnett squares). As with finance, risk assessment can be used as a statistical tool to calculate the likelihood of undesirable events occurring, and can assist with implementing protocols to avoid encountering such circumstances. Probability is used to design games of chance so that casinos can make a guaranteed profit, yet provide payouts to players that are frequent enough to encourage continued play.[25]

A probability is a way of assigning every event a value between zero and one, with the requirement that the event made up of all possible results (in our example, the event {1,2,3,4,5,6}) is assigned a value of one. To qualify as a probability, the assignment of values must satisfy the requirement that for any collection of mutually exclusive events (events with no common results, such as the events {1,6}, {3}, and {2,4}), the probability that at least one of the events will occur is given by the sum of the probabilities of all the individual events.[27]

If two events A and B occur on a single performance of an experiment, this is called the intersection or joint probability of A and B, denoted as [math]\displaystyle{ P(A \cap B) }[/math].

If two events, A and B are independent then the joint probability is[28]

If either event A or event B can occur but never both simultaneously, then they are called mutually exclusive events.

If two events are mutually exclusive, then the probability of both occurring is denoted as [math]\displaystyle{ P(A \cap B) }[/math] and

If two events are mutually exclusive, then the probability of either occurring is denoted as [math]\displaystyle{ P(A \cup B) }[/math] and

If the events are not mutually exclusive then

Relation to randomness and probability in quantum mechanics

In a deterministic universe, based on Newtonian concepts, there would be no probability if all conditions were known (Laplace's demon), (but there are situations in which sensitivity to initial conditions exceeds our ability to measure them, i.e. know them). In the case of a roulette wheel, if the force of the hand and the period of that force are known, the number on which the ball will stop would be a certainty (though as a practical matter, this would likely be true only of a roulette wheel that had not been exactly levelled – as Thomas A. Bass' Newtonian Casino revealed). This also assumes knowledge of inertia and friction of the wheel, weight, smoothness, and roundness of the ball, variations in hand speed during the turning, and so forth. A probabilistic description can thus be more useful than Newtonian mechanics for analyzing the pattern of outcomes of repeated rolls of a roulette wheel. Physicists face the same situation in the kinetic theory of gases, where the system, while deterministic in principle, is so complex (with the number of molecules typically the order of magnitude of the Avogadro constant 6.02×1023) that only a statistical description of its properties is feasible.

Probability theory is required to describe quantum phenomena.[33] A revolutionary discovery of early 20th century physics was the random character of all physical processes that occur at sub-atomic scales and are governed by the laws of quantum mechanics. The objective wave function evolves deterministically but, according to the Copenhagen interpretation, it deals with probabilities of observing, the outcome being explained by a wave function collapse when an observation is made. However, the loss of determinism for the sake of instrumentalism did not meet with universal approval. Albert Einstein famously remarked in a letter to Max Born: "I am convinced that God does not play dice".[34] Like Einstein, Erwin Schrödinger, who discovered the wave function, believed quantum mechanics is a statistical approximation of an underlying deterministic reality.[35] In some modern interpretations of the statistical mechanics of measurement, quantum decoherence is invoked to account for the appearance of subjectively probabilistic experimental outcomes.