Adaptive histogram equalization (AHE) is a computer image processing technique used to improve contrast in images. It differs from ordinary histogram equalization in the respect that the adaptive method computes several histograms, each corresponding to a distinct section of the image, and uses them to redistribute the lightness values of the image. It is therefore suitable for improving the local contrast and enhancing the definitions of edges in each region of an image.

Motivation and explanation of the method

Ordinary histogram equalization uses the same transformation derived from the image histogram to transform all pixels. This works well when the distribution of pixel values is similar throughout the image. However, when the image contains regions that are significantly lighter or darker than most of the image, the contrast in those regions will not be sufficiently enhanced. 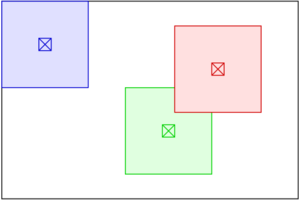 Pixels near the image boundary have to be treated specially, because their neighbourhood would not lie completely within the image. This applies for example to the pixels to the left or above the blue pixel in the figure. This can be solved by extending the image by mirroring pixel lines and columns with respect to the image boundary. Simply copying the pixel lines on the border is not appropriate, as it would lead to a highly peaked neighbourhood histogram.

Ordinary AHE tends to overamplify the contrast in near-constant regions of the image, since the histogram in such regions is highly concentrated. As a result, AHE may cause noise to be amplified in near-constant regions. Contrast Limited AHE (CLAHE) is a variant of adaptive histogram equalization in which the contrast amplification is limited, so as to reduce this problem of noise amplification.[3]

It is advantageous not to discard the part of the histogram that exceeds the clip limit but to redistribute it equally among all histogram bins.[3]

The redistribution will push some bins over the clip limit again (region shaded green in the figure), resulting in an effective clip limit that is larger than the prescribed limit and the exact value of which depends on the image. If this is undesirable, the redistribution procedure can be repeated recursively until the excess is negligible.

Adaptive histogram equalization in its straightforward form presented above, both with and without contrast limiting, requires the computation of a different neighbourhood histogram and transformation function for each pixel in the image. This makes the method very expensive computationally.

This procedure reduces the number of transformation functions to be computed dramatically and only imposes the small additional cost of linear interpolation.

An alternative to tiling the image is to "slide" the rectangle one pixel at a time, and only incrementally update the histogram for each pixel,[5] by adding the new pixel row and subtracting the row left behind. The algorithm is denoted SWAHE (Sliding Window Adaptive Histogram Equalization) by the original authors. The computational complexity of histogram calculation is then reduced from O(N²) to O(N) (with N = pixel width of the surrounding rectangle); and since there is no tiling a final interpolation step is not required.