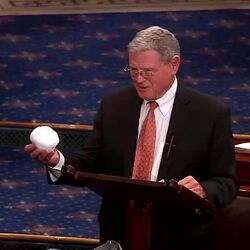 U.S. Senator James Inhofe (R-OK) holding a snowball on the Senate floor during a speech in which he derided climate change as a hoax.[1]

Within the sociology of knowledge, agnotology (formerly agnatology) is the study of deliberate, culturally-induced ignorance or doubt, typically to sell a product or win favour, particularly through the publication of inaccurate or misleading scientific data.[2][3] More generally, the term also highlights the condition where more knowledge of a subject leaves one more uncertain than before.

Coined in 1992 by linguist and social historian of technics and the commons Iain Boal[4][2][5][6] at the request of Stanford University professor Robert N. Proctor,[7] the word is based on the Neoclassical Greek word agnōsis (ἄγνωσις, 'not knowing'; cf. Attic Greek ἄγνωτος, 'unknown')[8] and -logia (-λογία).[9] Proctor cites as a prime example the tobacco industry's 40-year public relations campaign to manufacture doubt about the adverse health effects of tobacco use.[9][10] This technique and its subsequent adoption by the fossil fuel industry in a similar campaign against the scientific consensus on climate change is the focus of the 2010 book Merchants of Doubt by Naomi Oreskes and Erik M. Conway.[11]

David Dunning of Cornell University warns that "the internet is helping propagate ignorance,... which makes [users] prey for powerful interests wishing to deliberately spread ignorance."[3] Irvin C. Schick refers to unknowledge "to distinguish it from ignorance," using the example of "terra incognita" in early maps to note that the "reconstruction of parts of the globe as uncharted territory is...the production of unknowledge, the transformation of those parts into potential objects of Western political and economic attention. It is the enabling of colonialism."[12]

Active causes of culturally-induced ignorance can include the influence of the media, corporations, and governmental agencies, through secrecy and suppression of information, document destruction, and selective memory.[13] Another example is climate change denial, where oil companies paid teams of scientists to downplay the effects of climate change.[14] Passive causes include structural information bubbles, including those created by segregation along racial and class lines, that create differential access to information.

Agnotology also focuses on how and why diverse forms of knowledge do not "come to be," or are ignored or delayed. For example, knowledge about plate tectonics was censored and delayed for at least a decade because some evidence remained classified military information related to undersea warfare.[9]

There is a cult of ignorance in the United States, and there has always been. The strain of anti-intellectualism has been a constant thread winding its way through our political and cultural life, nurtured by the false notion that democracy means that
"my ignorance is just as good as your knowledge".

The term "agnotology" first appeared in print in a footnote in Stanford University professor Robert N. Proctor's 1995 book, The Cancer Wars: How Politics Shapes What We Know and Don't Know About Cancer:

Historians and philosophers of science have tended to treat ignorance as an ever-expanding vacuum into which knowledge is sucked – or even, as Johannes Kepler once put it, as the mother who must die for science to be born. Ignorance, though, is more complex than this. It has a distinct and changing political geography that is often an excellent indicator of the politics of knowledge. We need a political agnotology to complement our political epistemologies.[16]

In a 2001 interview about his lapidary work with agate, a colorful rock, Proctor was quoted using the term to describe his research "only half jokingly" as "agnotology." He connected the two seemingly unrelated topics by noting the lack of geologic knowledge and study of agate since its first known description by Theophrastus in 300 BC, relative to the extensive research on other rocks and minerals such as diamonds, asbestos, granite, and coal, all of which have much higher commercial value. He said agate was a "victim of scientific disinterest," the same "structured apathy" he called "the social construction of ignorance."[17]

He was later quoted as calling it "agnotology, the study of ignorance," in a 2003 The New York Times story on medical historians who testify as expert witnesses.[18]

Proctor co-organized a pair of events with Londa Schiebinger, his wife and fellow professor of science history: the first was a workshop at the Pennsylvania State University in 2003 titled "Agnatology: The Cultural Production of Ignorance;"[19] and later a conference at Stanford University in 2005 titled "Agnotology: The Cultural Production of Ignorance".[13] In 2008, they published an anthology entitled Agnotology: The Making and Unmaking of Ignorance, which "provides a new theoretical perspective to broaden traditional questions about 'how we know' to ask: Why don't we know what we don't know?" They place agnotology within the larger field of epistemology.[20]

In 2004, Londa Schiebinger offered a more precise definition of agnotology in a paper on 18th-century voyages of scientific discovery and gender relations,[21] and contrasted it with epistemology, the theory of knowledge, saying that the latter questions how humans know while the former questions why humans do not know: "Ignorance is often not merely the absence of knowledge but an outcome of cultural and political struggle."[22]

Its use as a critical description of the political economy has been expanded upon by Michael Betancourt in a 2010 article titled "Immaterial Value and Scarcity in Digital Capitalism,"[23] and expanded in the book The Critique of Digital Capitalism.[24] His analysis is focused on the housing bubble as well as the bubble economy of the period from 1980 to 2008. Betancourt argues that this political economy should be termed "agnotologic capitalism" because the systemic production and maintenance of ignorance is a major feature that enables the economy to function as it allows the creation of a "bubble economy."[21]

Betancourt's argument is posed in relation to the idea of affective labor:

The creation of systemic unknowns where any potential "fact" is always already countered by an alternative of apparently equal weight and value renders engagement with the conditions of reality – the very situations affective labor seeks to assuage – contentious and a source of confusion, reflected by the inability of participants in bubbles to be aware of the imminent collapse until after it has happened. The biopolitical paradigm of distraction, what [Juan Martin] Prada calls "life to enjoy", can only be maintained if the underlying strictures remain hidden from view. If affective labor works to reduce alienation, agnotology works to eliminate the potential for dissent.[23]

In his view, the role of affective labor is to enable the continuation of the agnotologic effects that enable the maintenance of the capitalist status quo.[23]

The availability of such large amounts of knowledge in this information age may not necessarily be producing a knowledgeable citizenry. Instead, it may be allowing many people to cherry-pick information in blogs or news that reinforces their existing beliefs,[25] and to be distracted from new knowledge by repetitive or base entertainments. There is conflicting evidence on how television viewing affects value formation and intelligence.[26]

An emerging new scientific discipline that has connections to agnotology is cognitronics:[27][28]

Cognitonics, first of all, aims (a) at explicating the distortions in the perception of the world caused by the information society and globalization and (b) at coping with these distortions in different fields. Cognitronics is studying and looking for the ways of improving cognitive mechanisms of processing information and developing emotional sphere of the personality – the ways aiming at compensating three mentioned shifts in the systems of values and, as an indirect consequence, for the ways of developing symbolic information processing skills of the learners, linguistic mechanisms, associative and reasoning abilities, broad mental outlook being important preconditions of successful work practically in every sphere of professional activity in information society.[28]

The field of cognitronics appears to be growing as international conferences have centered on the topic. The 2013 conference was held in Slovenia.[28]

From the same Greek roots, agnoiology refers either to "the science or study of ignorance, which determines its quality and conditions"[29] or "the doctrine concerning those things of which we are necessarily ignorant,"[30] describing a branch of philosophy studied by James Frederick Ferrier in the 19th century.[31]

Anthropologist Glenn Stone points out that some examples of agnotology (such as work promoting tobacco use) do not actually create a lack of knowledge so much as they create confusion. As a more accurate term Stone suggested "ainigmology", from the Greek root ainigma (as in 'enigma'), referring to riddles or to language that obscures the true meaning of a story.[32]