Some Greek measures of length were named after parts of the body, such as the δάκτυλος (daktylos, plural: δάκτυλοι daktyloi) or finger (having the size of a thumb), and the πούς (pous, plural: πόδες podes) or foot (having the size of a shoe). The values of the units varied according to location and epoch (e.g., in Aegina a pous was approximately 333 mm (13.1 in), whereas in Athens (Attica) it was about 296 mm (11.7 in)),[1] but the relative proportions were generally the same.

The ordinary units used for land measurement were:

Greeks measured volume according to either solids or liquids, suited respectively to measuring grain and wine. A common unit in both measures throughout historic Greece was the cotyle or cotyla whose absolute value varied from one place to another between 210 ml and 330 ml.[1] The basic unit for both solid and liquid measures was the κύαθος (kyathos, plural: kyathoi).[4]

The Attic liquid measures were: 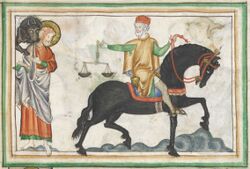 Illustration of the Third Horseman of the Apocalypse holding a set of scales; in the Book of Revelation he proclaims "A choinix of wheat for a denarius, and three choinikes of barley for a denarius;" indicating high food prices during a famine.[8]

and the Attic dry measures of capacity were:

The basic unit of Athenian currency was the obol, weighing approximately 0.72 grams of silver:[9][10]

Mass is often associated with currency since units of currency involve prescribed amounts of a given metal. Thus for example the English pound has been both a unit of mass and a currency. Greek masses similarly bear a nominal resemblance to Greek currency yet the origin of the Greek standards of weights is often disputed.[11] There were two dominant standards of weight in the eastern Mediterranean: a standard that originated in Euboea and that was subsequently introduced to Attica by Solon, and also a standard that originated in Aegina. The Attic/Euboean standard was supposedly based on the barley corn, of which there were supposedly twelve to one obol. However, weights that have been retrieved by historians and archeologists show considerable variations from theoretical standards. A table of standards derived from theory is as follows:[11]

Athenians measured the day by sundials and unit fractions. Periods during night or day were measured by a water clock (clepsydra) that dripped at a steady rate and other methods. Whereas the day in the Gregorian calendar commences after midnight, the Greek day began after sunset. Athenians named each year after the Archon Eponymous for that year, and in Hellenistic times years were reckoned in quadrennial epochs according to the Olympiad.

In archaic and early classical Greece, months followed the cycle of the Moon which made them not fit exactly into the length of the solar year. Thus, if not corrected, the same month would migrate slowly into different seasons of the year. The Athenian year was divided into 12 months, with one additional month (Poseidon deuterons, thirty days) being inserted between the sixth and seventh months every second year. Even with this intercalary month, the Athenian or Attic calendar was still fairly inaccurate and days had occasionally to be added by the Archon Basileus. The start of the year was at the summer solstice (previously it had been at the winter solstice) and months were named after Athenian religious festivals, 27 mentioned in the Hibah Papyrus, circa 275 BC.

This section of a frieze from the Elgin Marbles shows a cavalry procession that was part of the quadrennial Greater Panathenaic festival, always held in the month Hekatombion.