The Cassini space probe was deliberately disposed of via a controlled fall into Saturn's atmosphere on September 15, 2017, ending its nearly two-decade-long mission.[1][2][3][4] This method was chosen to prevent biological contamination of any of the moons of Saturn now thought to offer potentially habitable environments.[5] Factors that influenced the mission end method included the amount of rocket fuel left, the health of the spacecraft, and funding for operations on Earth.[6]

Some possibilities for Cassini's later stages were aerobraking into orbit around Titan,[6] leaving the Saturn system,[6] or making close approaches and/or changing its orbit.[6] For example, it could have collected solar wind data in a heliocentric orbit.[3]

During planning for its extended missions, various future plans for Cassini were evaluated on the basis of scientific value, cost, and time.[3][7] Some of the options examined included collision with Saturn atmosphere, an icy satellite, or rings; another was departure from Saturn orbit to Jupiter, Uranus, Neptune, or a centaur.[3][8] Other options included leaving it in certain stable orbits around Saturn, or departure to a heliocentric orbit.[3] Each plan required certain amounts of time and changes in velocity.[3] Another possibility was aerobraking into orbit around Titan.[6] 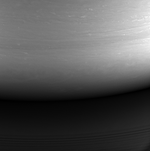 On July 4, 2014, the Cassini science team announced that the proximal orbits of the probe would be named the "Grand Finale".[9] This would be immediately preceded by a gradual shift in inclination to better view Saturn's polar hexagon, and a flyby of Enceladus to more closely study its cryovolcanism.[10] This was followed by a dive into Saturn's atmosphere.[9]

Scientific data was collected using eight of its twelve science instruments. All of the probe's magnetosphere and plasma science instruments, plus the spacecraft's radio science system, and its infrared and ultraviolet spectrometers collected data during the final plunge. The data rates flowing back from Saturn could not support imaging during the final plunge, so all pictures were downlinked (transmitted back to Earth) and cameras were switched off, before the final plunge began.[11] The predicted altitude for loss of signal was approximately 1,500 km (930 mi) above Saturn's cloud tops, when the spacecraft began to tumble and burn up like a meteor.[12]

Cassini's final transmissions were received by the Canberra Deep Space Communication Complex, located in Australia at 18:55:46 AEST. In a bittersweet ending for the scientists involved, some of whom had been involved in the mission for decades,[13][14] data was received for 30 seconds longer than anticipated, and the spacecraft's ultimate demise was predicted to have occurred within 45 seconds after that.[15] Homages were paid on social media.[16] NASA's video won an Emmy for "Outstanding Original Interactive Program".[17]