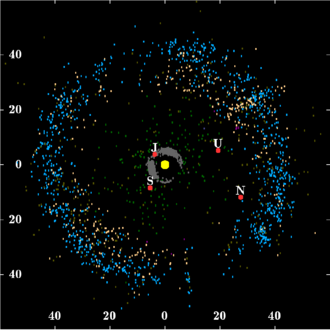 Positions of known outer Solar System objects.
The centaurs lie generally inwards of the Kuiper belt and outside the Jupiter trojans. (scale in AU; epoch as of January 2015; # of objects in parenthesis)

Centaurs are small solar system bodies with a semi-major axis between those of the outer planets. They generally have unstable orbits because they cross or have crossed the orbits of one or more of the giant planets; almost all their orbits have dynamic lifetimes of only a few million years,[1] but there is one centaur, (514107) 2015 BZ509, which may be in a stable (though retrograde) orbit.[2] Centaurs typically behave with characteristics of both asteroids and comets. They are named after the mythological centaurs that were a mixture of horse and human. It has been estimated that there are around 44,000 centaurs in the Solar System with diameters larger than 1 kilometer.[1]

The first centaur to be discovered, under the definition of the Jet Propulsion Laboratory and the one used here, was 944 Hidalgo in 1920. However, they were not recognized as a distinct population until the discovery of 2060 Chiron in 1977. The largest confirmed centaur is 10199 Chariklo, which at 260 kilometers in diameter is as big as a mid-sized main-belt asteroid, and is known to have a system of rings. It was discovered in 1997. However, the lost centaur 1995 SN55 may be somewhat larger.

No centaur has been photographed up close, although there is evidence that Saturn's moon Phoebe, imaged by the Cassini probe in 2004, may be a captured centaur that originated in the Kuiper belt.[3] In addition, the Hubble Space Telescope has gleaned some information about the surface features of 8405 Asbolus.

(As of 2008), three centaurs have been found to display comet-like comas: 2060 Chiron, 60558 Echeclus, and 166P/NEAT. Chiron and Echeclus are therefore classified as both asteroids and comets. Other centaurs, such as 52872 Okyrhoe, are suspected of having shown comas. Any centaur that is perturbed close enough to the Sun is expected to become a comet.

However, different institutions have different criteria for classifying borderline objects, based on particular values of their orbital elements:

The collection The Solar System Beyond Neptune (2008) defines objects with a semi-major axis between those of Jupiter and Neptune and a Jupiter – Tisserand's parameter above 3.05 – as centaurs, classifying the objects with a Jupiter Tisserand's parameter below this and, to exclude Kuiper belt objects, an arbitrary perihelion cut-off half-way to Saturn (q < 7.35) as Jupiter-family comets[note 1] and classifying those objects on unstable orbits with a semi-major axis larger than Neptune's as members of the scattered disc.[7]

Other astronomers prefer to define centaurs as objects that are non-resonant with a perihelion inside the orbit of Neptune that can be shown to likely cross the Hill sphere of a gas giant within the next 10 million years,[8] so that centaurs can be thought of as objects scattered inwards and that interact more strongly and scatter more quickly than typical scattered-disc objects.

The JPL Small-Body Database lists 452 centaurs.[9] There are an additional 116 trans-Neptunian objects (objects with a semi-major axis further than Neptune's, i.e. a > 30.1 AU) with a perihelion closer than the orbit of Uranus (q < 19.2 AU).[10] The Committee on Small Body Nomenclature of the International Astronomical Union has not formally weighed in on either side of the debate.

Instead, it has adopted the following naming convention for such objects: Befitting their centaur-like transitional orbits between TNOs and comets, "objects on unstable, non-resonant, giant-planet-crossing orbits with semimajor axes greater than Neptune's" are to be named for other hybrid and shape-shifting mythical creatures. Thus far, only the binary objects Ceto and Phorcys and Typhon and Echidna have been named according to the new policy.[11]

Other objects caught between these differences in classification methods include 944 Hidalgo which was discovered in 1920 and is listed as a centaur in the JPL Small-Body Database. (44594) 1999 OX3, which has a semi-major axis of 32 AU but crosses the orbits of both Uranus and Neptune is listed as an outer centaur by the Deep Ecliptic Survey (DES). Among the inner centaurs, (434620) 2005 VD, with a perihelion distance very near Jupiter, is listed as a centaur by both JPL and DES. 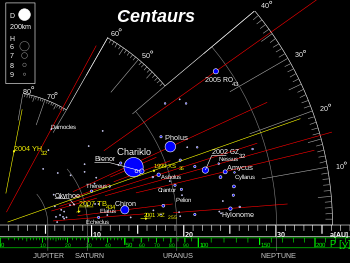 The diagram illustrates the orbits of known centaurs in relation to the orbits of the planets. For selected objects, the eccentricity of the orbits is represented by red segments (extending from perihelion to aphelion).

The orbits of centaurs show a wide range of eccentricity, from highly eccentric (Pholus, Asbolus, Amycus, Nessus) to more circular (Chariklo and the Saturn-crossers Thereus and Okyrhoe).

To illustrate the range of the orbits' parameters, the diagram shows a few objects with very unusual orbits, plotted in yellow : 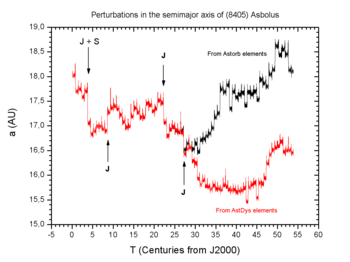 The semi-major axis of Asbolus during the next 5500 years, using two slightly different estimates of present-day orbital elements. After the Jupiter encounter of year 4713 the two calculations diverge.[13]

Because the centaurs are not protected by orbital resonances, their orbits are unstable within a timescale of 106–107 years.[14] For example, 55576 Amycus is in an unstable orbit near the 3:4 resonance of Uranus.[1] Dynamical studies of their orbits indicate that being a centaur is probably an intermediate orbital state of objects transitioning from the Kuiper belt to the Jupiter family of short-period comets.

Objects may be perturbed from the Kuiper belt, whereupon they become Neptune-crossing and interact gravitationally with that planet (see theories of origin). They then become classed as centaurs, but their orbits are chaotic, evolving relatively rapidly as the centaur makes repeated close approaches to one or more of the outer planets. Some centaurs will evolve into Jupiter-crossing orbits whereupon their perihelia may become reduced into the inner Solar System and they may be reclassified as active comets in the Jupiter family if they display cometary activity. Centaurs will thus ultimately collide with the Sun or a planet or else they may be ejected into interstellar space after a close approach to one of the planets, particularly Jupiter.

The relatively small size of centaurs precludes remote observation of surfaces, but colour indices and spectra can provide clues about surface composition and insight into the origin of the bodies.[14] 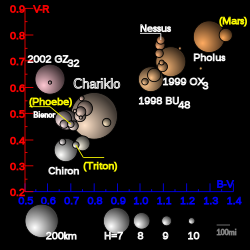 The colours of centaurs are very diverse, which challenges any simple model of surface composition.[15] In the side-diagram, the colour indices are measures of apparent magnitude of an object through blue (B), visible (V) (i.e. green-yellow) and red (R) filters. The diagram illustrates these differences (in exaggerated colours) for all centaurs with known colour indices. For reference, two moons: Triton and Phoebe, and planet Mars are plotted (yellow labels, size not to scale).

Centaurs appear to be grouped into two classes:

There are numerous theories to explain this colour difference, but they can be divided broadly into two categories:

As examples of the second category, the reddish colour of Pholus has been explained as a possible mantle of irradiated red organics, whereas Chiron has instead had its ice exposed due to its periodic cometary activity, giving it a blue/grey index. The correlation with activity and color is not certain, however, as the active centaurs span the range of colors from blue (Chiron) to red (166P/NEAT).[16] Alternatively, Pholus may have been only recently expelled from the Kuiper belt, so that surface transformation processes have not yet taken place.

The interpretation of spectra is often ambiguous, related to particle sizes and other factors, but the spectra offer an insight into surface composition. As with the colours, the observed spectra can fit a number of models of the surface. 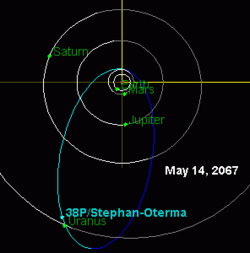 Comet 38P exhibits centaur-like behavior by making close approaches to Jupiter, Saturn, and Uranus between 1982 and 2067.[20]

Chiron appears to be the most complex. The spectra observed vary depending on the period of the observation. Water ice signature was detected during a period of low activity and disappeared during high activity.[21][22][23]

Observations of Chiron in 1988 and 1989 near its perihelion found it to display a coma (a cloud of gas and dust evaporating from its surface). It is thus now officially classified as both a comet and an asteroid, although it is far larger than a typical comet and there is some lingering controversy. Other centaurs are being monitored for comet-like activity: so far two, 60558 Echeclus, and 166P/NEAT have shown such behavior. 166P/NEAT was discovered while it exhibited a coma, and so is classified as a comet, though its orbit is that of a centaur. 60558 Echeclus was discovered without a coma but recently became active,[24] and so it too is now classified as both a comet and an asteroid.

Carbon monoxide has been detected in 60558 Echeclus[25] and Chiron [26] in very small amounts, and the derived CO production rate was calculated to be sufficient to account for the observed coma. The calculated CO production rate from both 60558 Echeclus and Chiron is substantially lower than what is typically observed for 29P/Schwassmann–Wachmann, another distantly active comet often classified as a centaur.

There is no clear orbital distinction between centaurs and comets. Both 29P/Schwassmann-Wachmann and 39P/Oterma have been referred to as centaurs since they have typical centaur orbits. The comet 39P/Oterma is currently inactive and was seen to be active only before it was perturbed into a centaur orbit by Jupiter in 1963.[27] The faint comet 38P/Stephan–Oterma would probably not show a coma if it had a perihelion distance beyond Jupiter's orbit at 5 AU. By the year 2200, comet 78P/Gehrels will probably migrate outwards into a centaur-like orbit.

A periodogram analysis of the light-curves of these Chiron and Chariklo gives respectively the following rotational periods: 5.5±0.4~h and 7.0± 0.6~h.[28][28]

A catalogue on the physical characteristics of centaurs can be found at http://www.johnstonsarchive.net/astro/tnodiam.html. Centaurs can reach diameters up to hundreds of kilometers. The largest centaurs have diameters in excess of 100 km, and primarily reside beyond about 13.11 AU. [29]

The study of centaur development is rich in recent developments, but any conclusions are still hampered by limited physical data. Different models have been put forward for possible origin of centaurs.

Simulations indicate that the orbit of some Kuiper belt objects can be perturbed, resulting in the object's expulsion so that it becomes a centaur. Scattered disc objects would be dynamically the best candidates (For instance, the centaurs could be part of an "inner" scattered disc of objects perturbed inwards from the Kuiper belt.[30]) for such expulsions, but their colours do not fit the bicoloured nature of the centaurs. Plutinos are a class of Kuiper belt object that display a similar bicoloured nature, and there are suggestions that not all plutinos' orbits are as stable as initially thought, due to perturbation by Pluto.[31] Further developments are expected with more physical data on Kuiper belt objects.

^ the class is defined by the perihelion and aphelion distance of the object: S indicates a perihelion/aphelion near Saturn, U near Uranus, N near Neptune, and K in the Kuiper belt.