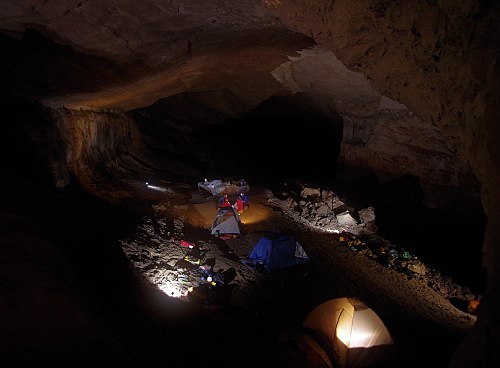 CAVES, an acronym for Cooperative Adventure for Valuing and Exercising human behaviour and performance Skills, is a European Space Agency astronaut training course in which international astronauts train in a space-analogue cave environment.[1] The course is designed at the European Astronaut Center to prepare astronauts for safe and efficient long duration spaceflight operations by means of a realistic scientific and exploration mission within a multicultural, ISS-representative team.

Each training implementation last for approximately two weeks. In the first week, the so-called "cavenauts" are provided with the necessary scientific knowledge and technical skills to work effectively and safely in the underground environment and visit some simple caves to get acquainted with the condition they will find during their expedition. Afterwards, they spend six uninterrupted days exploring a complex cave system. The main purpose of the mission is to foster their communication, decision-making, problem-solving, leadership and team dynamics capabilities by means of team processes and a real crew mission performed in a space-like environment.[2][3]

CAVES takes place in several caves in the Italian island of Sardinia, part of a Karst System which lie within the Supramonte region of the Gennargentu National Park. Rocks most commonly found in the area are limestone and dolomite.[4] 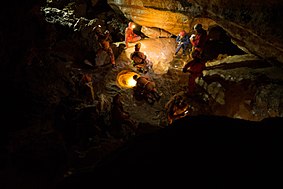 The CAVES training uphold the following training objectives for participants: 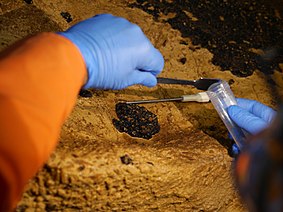 The cave environment is an exceptional space analogue, as it allows to recreate, on Earth, most of the stress elements and specific characteristics encountered in long duration spaceflight. Such peculiar elements include:

Another analogue aspect concerns astronauts progression, i.e. how they move inside the cave. The employed speleological techniques involve safety principles similar to that of EVA, such as the need to be attached to a safe surface – the cave wall in CAVES, the ISS or the vehicle in space. Last, the crew mission performed during the exploration has several elements in common with the ISS operations, including a time-lined sequence of activities, daily planning calls to the ground support team, standardized procedures and data collection forms.

In the same way astronauts in space spend a consistent part of their time doing science, cavenauts are tasked to perform a real crew mission comprising several different experiments and activities while exploring the cave. Conducting scientific and technological research is the secondary objectives of the CAVES course, in addition to team training. A third one consists in exploring and documenting previously unknown areas of the cave.

New Alpioniscus species discovered by astronauts during a caves training.

Biology (counting and sampling of cave terrestrial and aquatic fauna, search for micro-crustaceans, search for fauna in the soil)

One of the most remarkable scientific results is the discovery of a previously unknown species of crustaceans of the genus Alpioniscus living in the cave.[5]

All other results are available on the ESA Erasmus Experiment Archive, divided by year:

Different roles and responsibilities are assigned to the participants for the mission, according to their background, experience and interests.

All participants are astronauts – either veteran or rookies – unless otherwise mentioned.