Short description: A partial ring of stars in the Milky Way galaxy 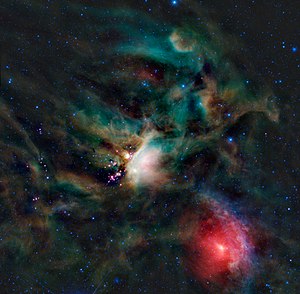 The ρ Oph cloud complex is a star-forming region in the Gould Belt.

The Gould Belt is a local, partial ring of stars in the Milky Way, about 3000 light years long, tilted toward/away from the galactic plane by about 16 to 20 degrees. It contains many O- and B-type stars, amounting to the nearest star-forming regions of the local spiral arm, to which the Sun belongs. It has been largely superseded in definition by the Radcliffe Wave. The Sun is closest to the Orion (constellation) part of its recent star-created sub-belt of the many times longer Orion Arm. This means the solar system is about 325 light years away, though about 100 light years further to the more extensive Radcliffe Wave's stars, dust and gas in the Taurus Molecular Cloud (which is the nearest large star formation region).

The Belt, as formed, and traditionally defined, runs for much less than one tenth of the extent of the local circumference of the galaxy, meaning in galactic coordinates it spans a narrow range of galactic longitudes. The coalescence and/or inception of new stars which cluster within it, nearby, are dated to about 30 to 50 million years ago. Beyond suspected prior nebulosity of many of the younger stars, and the relative concentration of gas mentioned in the Radcliffe Wave, the factors that have led to the Gould Belt's unbroken nature and concentration are far from fully understood – dark matter has in some leading literature been posited as causatory, in astrophysics, as somehow intrinsic to the high density of recent stellar formation seen. It is named after Benjamin Gould, who identified it in 1879.[1][2][3]

The belt contains bright, young stars in many constellations. These are, in order, going south-west then north-west (after Crux):

The dense plane of the Milky Way, looking slightly and fully tangentially, and then outward, makes luminosity and dust in forming the central axis for its course, though stays in Scorpius, not passing noticeably into Lupus and stays to one side of Orion, for instance. The belt thus meanders slightly east and west of its main course, corresponding with its tilt to, or maximal deviation from, the visible, star-rich galactic plane.

Star-forming regions and OB associations that make up this region include the Orion Nebula and the Orion molecular clouds, the Scorpius-Centaurus OB Association, Cepheus OB2, Perseus OB2, and the Taurus-Auriga Molecular Clouds. The Serpens Molecular Cloud containing star-forming regions W40 and Serpens south is often included in Gould Belt surveys, but is not formally part of the Gould Belt due to its greater distance.

A theory proposed around 2009 suggests that the Gould Belt formed about 30 million years ago when a blob of dark matter collided with the molecular cloud in our region. There is also evidence for similar Gould belts in other galaxies.[4][5]