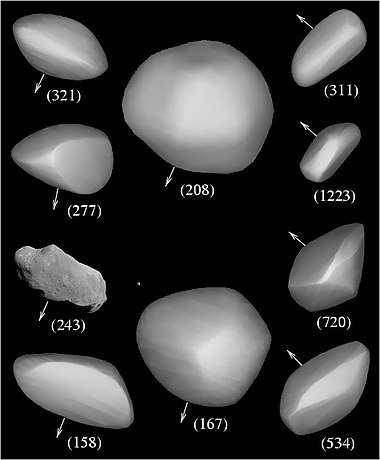 The Koronis or Koronian family (FIN: 605), also known as the Lacrimosa family,[1]:16 is a very large asteroid family of stony asteroids, located in the outer region of the asteroid belt. They are thought to have been formed at least two billion years ago in a catastrophic collision between two larger bodies. The family is named after 158 Koronis, and the largest known member (208 Lacrimosa) is about 41 km (25 mi) in diameter. The Koronis family travels in a cluster along the same orbit.[2] It has 5949 members.[1]

On August 28, 1993, the Galileo spacecraft visited a member of this family, 243 Ida. A photo of Ida (and its tiny moon Dactyl) is part of the composite image at right (numbered 243).