Short description: Straight line segment that passes through the center of a circle 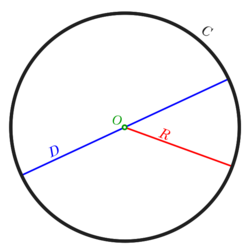 For a convex shape in the plane, the diameter is defined to be the largest distance that can be formed between two opposite parallel lines tangent to its boundary, and the width is often defined to be the smallest such distance. Both quantities can be calculated efficiently using rotating calipers.[1] For a curve of constant width such as the Reuleaux triangle, the width and diameter are the same because all such pairs of parallel tangent lines have the same distance.

In differential geometry, the diameter is an important global Riemannian invariant.

In planar geometry, a diameter of a conic section is typically defined as any chord which passes through the conic's centre; such diameters are not necessarily of uniform length, except in the case of the circle, which has eccentricity [math]\displaystyle{ e = 0. }[/math]

The symbol or variable for diameter, ⌀, is sometimes used in technical drawings or specifications as a prefix or suffix for a number (e.g. "⌀ 55 mm"), indicating that it represents diameter. For example, photographic filter thread sizes are often denoted in this way.

In German, the diameter symbol (German Durchmesserzeichen) is also used as an average symbol (Durchschnittszeichen).

The Latin small letter o with stroke ø is similar in size and design to this. The diameter symbol ⌀ is distinct from the empty set symbol ∅, from an (italic) uppercase phi Φ, and from the Nordic vowel Ø (Latin capital letter O with stroke).[5] See also slashed zero.

The symbol has a Unicode code point at U+2300 ⌀ DIAMETER SIGN (HTML &#8960;), in the Miscellaneous Technical set. On an Apple Macintosh, the diameter symbol can be entered via the character palette (this is opened by pressing in most applications), where it can be found in the Technical Symbols category. In Unix/Linux/ChromeOS systems, it is generated using  . It can be obtained in Unix-like operating systems using a Compose key by pressing, in sequence, .[6] In Windows, it can be entered in most programs with Alt code 8960.

The character will sometimes not display correctly, however, since many fonts do not include it. In many situations, the Nordic letter ø at Unicode U+00F8 ø LATIN SMALL LETTER O WITH STROKE (HTML &#248; · &oslash;) is an acceptable substitute. It can be entered on a Macintosh by pressing (the letter o, not the number 0). In Unix/Linux/ChromeOS systems, it is generated using   or . AutoCAD uses U+2205 ∅ EMPTY SET available as a shortcut string %%c.

In Microsoft Word, the diameter symbol can be acquired by typing and then pressing .

In LaTeX, the diameter symbol can be obtained with the command \diameter from the "wasysym" package.[7]