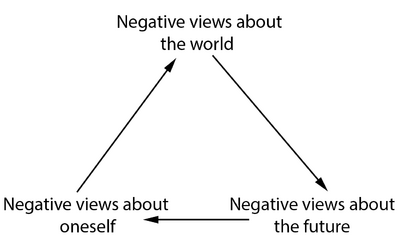 Beck's cognitive triad, also known as the negative triad,[1][2] is a cognitive-therapeutic view of the three key elements of a person's belief system present in depression. It was proposed by Aaron Beck in 1967.[3] The triad forms part of his cognitive theory of depression[4] and the concept is used as part of CBT, particularly in Beck's "Treatment of Negative Automatic Thoughts" (TNAT) approach.

Examples of this negative thinking include:

From a cognitive perspective, depressive disorders are characterized by people's dysfunctional negative views of themselves, their life experience (and the world in general), and their future—the cognitive triad.

People with depression often view themselves as unlovable, helpless, doomed or deficient. They tend to attribute their unpleasant experiences to their presumed physical, mental, and/or moral deficits.[6] They tend to feel excessively guilty, believing that they are worthless, blameworthy, and rejected by self and others. They may have a very difficult time viewing themselves as people who could ever succeed, be accepted, or feel good about themselves and this may lead to withdrawal and isolation, which further worsens the mood.[7] 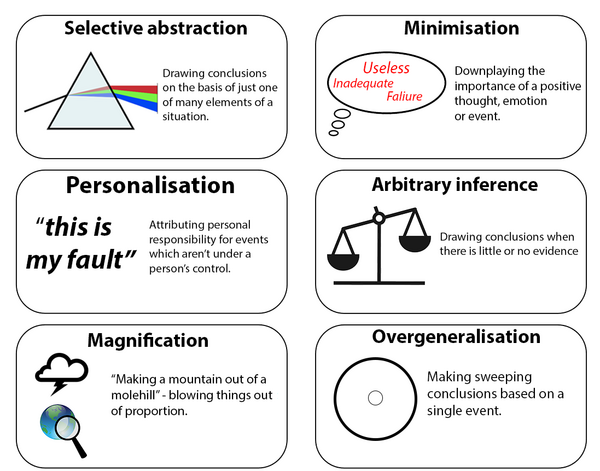 Examples of some of the cognitive biases used by depressed individuals, according to cognitive theories including Beck's cognitive model. People with depression may be taught how to identify and alter these biases as part of Cognitive Behavioural Therapy.

Beck proposes that those with depression develop cognitive distortions, a type of cognitive bias sometimes also referred to as faulty or unhelpful thinking patterns. Beck referred to some of these biases as "automatic thoughts", suggesting they are not entirely under conscious control. People with depression will tend to quickly overlook their positive attributes and disqualify their accomplishments as being minor or meaningless. They may also misinterpret the care, good will, and concern of others as being based on pity or susceptible to being lost easily if those others knew the “real person" and this fuels further feelings of guilt. The main cognitive distortions according to Beck are summarised below:[1][8]

Depressed people view their lives as devoid of pleasure or reward, presenting insuperable obstacles to achieving their important goals. This is often manifested as a lack of motivation and leads to the depressed person feeling further withdrawal and isolation as they may be seen as lazy by others. Everything seems and feels “too hard to manage” and other people are seen as punishing (or potentially so). They believe that their troubles will continue indefinitely, and that the future will only bring further hardship, deprivation, and frustration. “Paralysis of the will” results from the depressed patients' pessimism and hopelessness. Expecting their efforts to end in failure, they are reluctant to commit themselves to growth-oriented goals, and their activity level drops. Believing that they cannot affect the outcome of various situations, they experience a desire to avoid such situations.[7]

Suicidal wishes are seen as an extreme expression of the desire to escape from problems that appear to be uncontrollable, interminable, and unbearable.[10]

Beck also believed that a depressed person will, often from childhood experiences, hold a negative self-schema.[11] This schema may originate from negative early experiences, such as criticism, abuse or bullying.[12] Beck suggests that people with negative self-schemata are liable to interpret information presented to them in a negative manner, leading to the cognitive distortions outlined above. The pessimistic explanatory style, which describes the way in which depressed or neurotic people react negatively to certain events, is an example of the effect of these schemata on self-image. This explanatory style involves blaming oneself for negative events outside of their control or the behaviour of others (personalisation), believing that such events will continue forever and letting these events significantly affect their emotional wellbeing.

Measuring aspects of the triad

A number of instruments have been developed to attempt to measure negative cognition in the three areas of the triad.[13] The Beck Depression Inventory (BDI) is a well-known questionnaire for scoring depression based on all three aspects of the triad. Other examples include the Beck Hopelessness Scale[14] for measuring thoughts about the future and the Rosenberg Self-Esteem Scale[15] for measuring views of the self. The Cognitive Triad Inventory (CTI) was developed by Beckham et al.[13] to attempt to systematically measure the three aspects of Beck's triad. The CTI aims to quantify the relationship between "therapist behaviour in a single treatment session to changes in the cognitive triad" and "patterns of changes to the triad to changes in overall depressive mood".[13] This inventory has since been adapted for use with children and adolescents in the CTI-C, developed by Kaslow et al.[16]