Francis Joseph McCabe (May 3, 1936 - March 15, 2014) was a manufacturing company executive, inventor, pilot and an environmentalist. He was the founder of Prefco Products, a fire and smoke damper manufacturer and also designed the world’s fastest and lowest wind-responding wind-turbine airfoil.

In addition, McCabe was a rocket scientist and had worked with Boeing, MDI and NASA engineers.[3][4] McCabe gave speeches, was a consultant, a writer and owned more than 100 patents in machinery and aerodynamics.[5][6][7] Before his death, McCabe was working on gryoscopic physics, examining its spin-motion-power energy usages. He had submitted this idea to NASA as a way to replace rocket propulsion. McCabe taught gyroscopic science through The Institutes for the Achievement of Human Potential and at The Quaker School in Horsham, PA.[3][4]

McCabe was born in Philadelphia, Pennsylvania to Felix and Josephine McCabe. He graduated from Northeast Catholic High School for Boys, where he was an honor student.[1] After graduation, McCabe took mechanical engineering classes at Drexel University.[1][4] He then joined the Navy where he served as a pilot from 1958-1964.[3] Upon leaving the Navy he worked in various jobs, including owning a hot rod building company that modified engines in different combinations of hot rods. McCabe once modified a 1958 Corvette to go faster than 200 miles per hour with his own engine accessories.[3] In 1968 he started his first company, Prefco Products, a fire damper and smoke control company in Doylestown, Pennsylvania.

The research and development team at Prefco developed 'The McCabe Link'- a resettable Bi-metal fire link that is a heat releasing device for fire and smoke protection applications.[8][9] The McCabe Link became recognized as a life saving invention by the UL and ASHRAE.[10] Prefco also manufactured fire and smoke dampers that allow ventilation systems to draw toxic smoke from a building that is on fire. Their products are sold throughout the United States, Canada , South America, Asia and the Middle East.[11][12][13] Prefco helped standardize the smoke control industry worldwide, and was instrumental in changing laws on fire regulation and safety.[1]

McCabe also founded the Levr/Air firm in Doylestown, where he created the most powerful max-torque windmill airfoil system from the air and wind technology he developed at Prefco. This new wind technology was deployed to power the air system and production lines at Levr/Air. McCabe also created the first car to run on compressed air.[3][6] The vehicle was charged by a low RPM high-torque wind mill, either from the wind mill mounted on the car or remotely.[1][3][14][15] With the help of NASA engineers, McCabe also modified the world's fastest single engine airplane, the Glasair III.[3] McCabe had also built and owned 3 experimental airplanes and had flown parachute hang gliders, experimental planes, civilian planes, Navy planes, commercial airliners and the Space Shuttle trainer.[3][6]

In 2009, McCabe was Vice-President of Advanced Designs for Omniwind Energy.[3] Omniwind had the idea of mounting a wind turbine on a 30-foot pole and positioning it next to a house. The turbine, with its unique airfoil design, would be capable of producing energy at wind speeds as low as three to five miles per hour. The design was invented by McCabe, with the idea of using the energy as it is produced, so there would be no need for battery cells to store it.[16]

Precession on a gyroscope.

In later life, he became interested in gyroscopic physics and conducted experiments in gyroscopic motion. McCabe said he believed that the spiral energy called gyroscopic precession had the potential to become the world’s most powerful generator of energy and power. McCabe claimed that his discovery could be used to reduce greenhouse gases, thereby reducing pollution.[3][4][6]

According to McCabe, there was power created from the gyroscopic precession and he explored how to channel that power. McCabe's theory was that a spinning wheel shaped like a disc put into gyroscopic motion by a certain amount of torque could, in turn, produce an exponential amount of torque. McCabe discovered that when he used an air pressurizer to put 1.2 pounds per square inch (PSI) of torque into his gyroscopic wheel, it created 1,200 PSI of torque out. He also discovered the in-to-out relationship grew in an exponential manner and that by adding a second wheel, it put in 25 PSI, and the result was 4,200 PSI. McCabe was quoted as saying about his experiment: “If Isaac Newton ever saw this thing, the world would be a different place today.”[3][4][6]

McCabe also explored using gyroscopes for use in DNA re-encryption. This work began when he built moving machines for brain damaged children for the Institute for Achievement of Human Potential. McCabe taught gyroscopic science at the Institute and at The Quaker School in Horsham, Pennsylvania.[3][4][6] 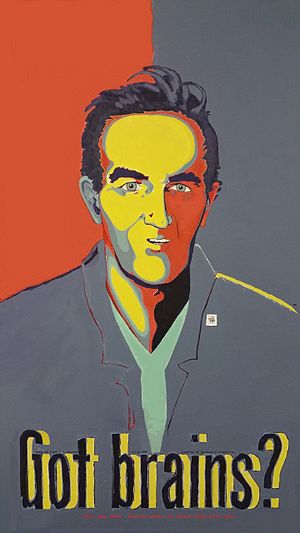 The eco-physicist, Francis J McCabe circa 1985 for the 'Got Brains' ad campaign

McCabe has published 11 scientific articles on aerodynamics, gyrodynamics, smoke/fire control, building and hospital disease control and social policies.[6] He was invited by the Queen to speak to the Parliament of England about reducing germs in hospitals by implementing pressurization (contaminated-low; uncontaminated-high) to prevent the spread of germs, which had already been initiated by McCabe in his local hospital.[3][4][6] McCabe's other awards and achievements include:[3][6][17]